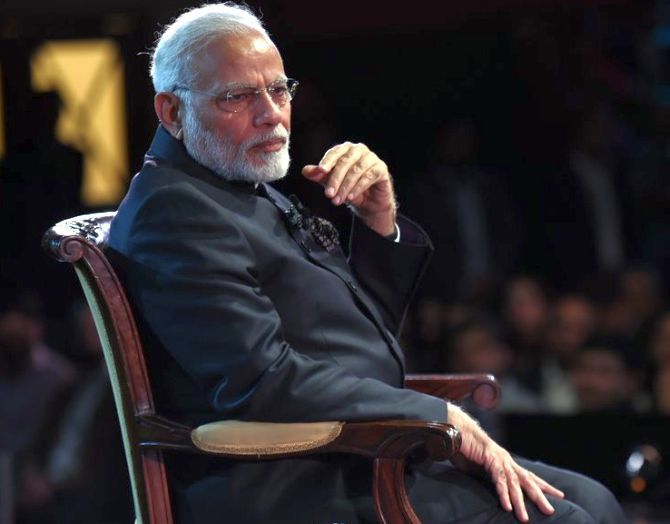 Prime Minister Narendra Modi is the most liked world leader and far ahead of others, including United States President Donald Trump, when it comes to popularity on Facebook, according to a study which said 43.2 million people follow the Indian premier on the social media platform.

Trump, who rules the other social media platform Twitter, is in second place with 23.1 million followers, according to the study "World Leaders on Facebook" released today by Burson Cohn & Wolfe.

The study analyses the activity of 650 Facebook pages of heads of state and government and foreign ministers from January 1, 2017 using aggregate data from Facebook's Crowdtangle tool, it said in a statement.

Modi, 67, has always encouraged use of social media platforms to stay in touch with the public.

The survey's findings were shared by Twiplomacy, which tracks and promotes digital diplomacy of world leaders. It said that Modi has the second highest number of interactions and interaction rate behind Trump.

Interestingly, the five most liked pictures in 2017 were all posted by Modi with his photo at Odisha's famous Lingaraj temple becoming the most popular.

Along with the Lingaraj temple photo, Modi wrote- "Prayed at the Lingaraj Temple in Bhubaneswar. The magnificence of the Temple and Temple Complex leaves a lasting impression on the mind."

Among videos, the third most popular Facebook live video was one shared by Israeli Prime Minister Benjamin Netanyahu from Modi's visit to the Jewish state in July last.

Apart from Modi's personal page, the official Facebook page of the Prime Minister's Office (PMO) figures in the survey as it is fourth in overall list of most liked pages and 9th in the list of interaction rate as well as total number of interactions.

The survey said the PMO was also the fourth most checked-in destination, after the White House, the Ugandan Presidency and 10, Downing Street.

In the list of "Peer Connection of World Leaders", which counts the pages of world leaders liked by their counterparts, Modi is 10th, the survey said.

However, nine pages ahead of him are not personal pages of any world leader but of their offices. For instance, topping the list is the White House and other names include the US State Department, European Commission, UK's foreign office etc.

The other leaders who feature in the list of most liked world leaders are Queen Raina of Jordan, President Erdogan of Turkey, President Joko Widodo of Indonesia, President Abdel Fatah el-Sisi of Egypt and Prime Minister Justin Trudeau.

The study found that 175, or 91 per cent, of the 193 United Nations member states maintain an official Facebook page. In addition, 109 heads of state, 86 heads of government and 72 foreign ministers maintain personal pages on the platform.

Facebook has become the key platform for world leaders and governments to engage with voters, supporters and citizens. As of March 15, 2018, all pages of world leaders combined had a total of 309.4 million followers. Since January 1, 2017, they have published a total of 536,644 posts which have garnered close to 900 million interactions, it said.

The findings revealed that, while more than half of the posts have photos, world leaders are increasingly sharing videos and a handful are going live to talk directly to their constituents.