BJP's mission is to work for country: PM at party office bearers' meet

Prime Minister Narendra Modi on Sunday asked Bharatiya Janata Party workers to strengthen and expand the party with the motto of 'nation first' and said its mission is to work for the country. 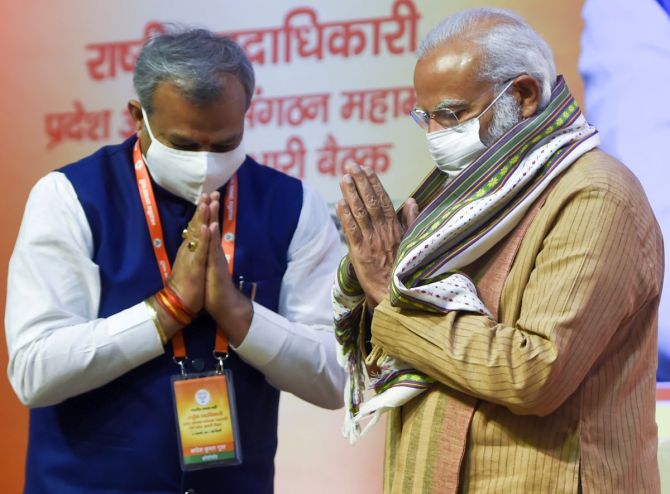 Modi was addressing the first meeting of the BJP's new set of national office-bearers, during which the party also passed a resolution thanking him for reforms in the agriculture sector and for his able leadership in effective handling of the COVID-19 situation.

Prime Minister Modi at the meeting said the party's mission is to work for the country and its development, BJP general secretary Bhupender Yadav said at a press conference.

He also asked BJP workers to strengthen and expand the organisation with the motto of "nation first", Yadav said.

During the meeting, which was chaired by BJP chief J P Nadda, Prime Minister Modi told party leaders to take the benefits of the new farm laws to the people.

The meeting was inaugurated by Modi and it started by paying tributes to those who lost their lives due to the coronavirus.

The political resolution was passed thanking the prime minister for the reforms in the agriculture sector and his able leadership in effective handling of the pandemic, BJP vice president Raman Singh said.

He said the resolution also highlights the Garib Kalyan Yojana during the pandemic, comprehensive budget and diligent handling of the situation on the Line of Actual Control with China.

Earlier, BJP general secretary Arun Singh had informed that during the course of the meet, discussions will be held on farm laws, Aatmanirbhar Bharat and upcoming state polls.

The meeting, which was also being attended by BJP state unit presidents, assumes significance as it came amid fierce protests by a section of farmers in Punjab, Haryana and western Uttar Pradesh against the three new farm laws.

The farmer union leaders have been stepping up their attack on the Modi government over the issue.

The BJP is also readying for the assembly polls in five states, including West Bengal, which is being eyed by the saffron party as its next big prize in its bid to expand its footprint across the country.

These national official-bearers were appointed last year after Nadda took over as party president, and no physical meeting could be held so far due to the COVID-19 pandemic.