PM doesn't respect farmers, wants to tire them out: Rahul

Prime Minister Narendra Modi does not respect farmers and wants to tire out those protesting against the Centre's new agriculture laws, Congress leader Rahul Gandhi alleged on Friday. Congress MPs from Punjab Ravneet Singh Bittu and Gurjit Singh Aujla, along with party MLAs from the state, were taken into custody by police and removed from Jantar Mantar soon after the Gandhis visited them.

The former Congress president's remarks came on a day when the government met the protesting farmer unions for the ninth time to break the over-a-month-long deadlock on the three farm laws.

Since the talks remained inconclusive, they will again meet on January 19.

"The talks are being held only to delay. Prime Minister Modi thinks he has the power and will tire the farmers out, but he is mistaken," Gandhi told reporters.

"Modi does not have the basic respect for farmers. He does not even care if over 100 farmers die.

"He thinks he has the power and the protesting farmers will tire out after some days, but they will not relent and you will have to run," he said.

Gandhi said whether it is the media or the IT, retail or power sectors in the country, four-five big businessmen run everything.

"Be it airports or courts, everything is being run by these five people and Modi is allowing them to do so. This is the truth.

"Modi is not understanding India as he thinks farmers have no power.

"You should know what is happening and farmers need to understand that their time is being wasted and they are being made to tire out.

"They think farmers have no power," the former Congress chief said.

'Modi's narrative has been broken and the government's arrogance will also be broken, but the farmers' courage has neither broken nor will it break.

'The government will have to withdraw the anti-agriculture laws,' he later said in a tweet in Hindi, sharing his interaction at Jantar Mantar.

Priyanka Gandhi also shared Rahul Gandhi's interaction on Twitter and said farmers have protected the country's independence by providing food security and the day it goes, India will lose its independence.

'On one side are Narendra Modi and his 2-3 rich friends and on the other are India and its farmers. Their ego will be shattered soon,' she wrote on Twitter.

At Jantar Mantar, Rahul Gandhi said youngsters are not getting jobs due to the poor economic situation in the country and alleged that Modi and his few industrialist friends want to take away whatever people have.

He said this agitation has just started and the farm laws will have to be repealed.

"They (the government) do not know the strength of farmers. They will not relent. Modi does not understand this. Had he understood this, the government would have taken the laws back today itself," the Congress leader said.

about the objections being raised over a proposed tractor rally by the protesting farmers on Republic Day, he said, "If farmers want to come out and take out a tractor parade on Republic Day, what is the harm in it."

He said if anyone 'attacks' farmers, it is an attack on the country.

"This is a financial issue, not a political one. The prime minister wants to hand over everything that farmers have to his corporate friends," the former Congress chief alleged.

He also raised strong objections to the protesting farmers being dubbed as 'Khalistanis'.

Thousands of farmers have come out to protest against the farm laws and 'you should not have dubbed them as Khalistanis', Gandhi said.

The Gandhis earlier led the Congress's protest outside the Raj Niwas in New Delhi.

Thousands of farmers, mainly from Punjab, Haryana and western Uttar Pradesh, are protesting at various border points of Delhi since November 28 last year against the Farmers (Empowerment and Protection) Agreement of Price Assurance and Farm Services Act, 2020, the Farmers Produce Trade and Commerce (Promotion and Facilitation) Act, 2020 and the Essential Commodities (Amendment) Act, 2020.

The Congress is demanding a repeal of the farm laws, alleging that they are against the interests of farmers and farming and are aimed at helping only the 'corporate friends' of the ruling Bharatiya Janata Party.

The three farm laws, enacted in September last year, have been projected by the government as major reforms in the agriculture sector that will remove middlemen and allow farmers to sell their produce anywhere in the country. 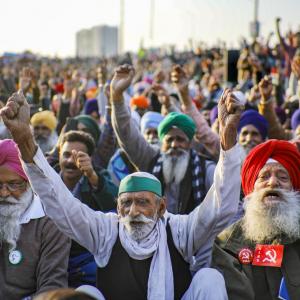