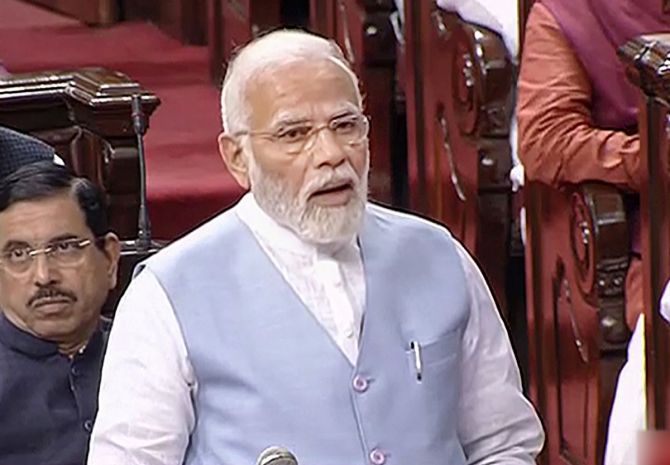 Two days before Naidu demits office, the Rajya Sabha bade him farewell with Modi leading the House in lauding his tenure during which, the PM said, the productivity of the House as well as members' attendance increased.

"Your one-liners are wit-liners and win-liners as well... There is nothing left to be said after that. Your each word is heard, preferred, revered and never countered," Modi said in his speech.

He said that during the five-year term, Naidu raised the standards of functioning of the House with his discipline and experience.

"Under your leadership and discipline, the productivity of this House touched new heights. During your term, Rajya Sabha's productivity has increased 70 per cent. Attendance of members in the House also increased," Modi said, adding a record 177 bills were passed or discussed during these five years.

The prime minister said there is both depth and substance in what Naidu says. "There is warmth and wisdom too."

While Naidu's experience and guidance benefited the MPs, he sometimes also scolded them, Modi said, adding he was sure that none would have taken his reprimands to heart.

"You always stressed that disruptions beyond a point are equivalent to 'avmanana' (contempt or derogation) of the House," he said, referring to the outgoing chairman. "I see the maturity of democracy in your principles."

Modi said proceedings used to get adjourned in the past when debates or discussions were disrupted, but Naidu used dialogue, contact and coordination to run the House.

"When there was a confrontation in the House, we always heard from you 'let the government propose, opposition oppose, parliament dispose!'," he said.

The prime minister said Naidu will remain a source of inspiration and the decisions such as bringing efficiency in working of the secretariat, use of IT and paperless working will help in the 'upward journey of the Upper House'.

"One of the admirable things about Naidu is his passion for Indian languages. This was reflected in how he presided over the House," Modi said, adding as chairman he encouraged the use of mother tongue.

As vice president, Naidu devoted a lot of time to youth welfare, Modi said, adding his 25 per cent of engagements were in youth programmes.

"I have worked with M Venkaiah Naidu Ji closely over the years. I have also seen him take up different responsibilities, and he performed each of them with great dedication," he said.

"There is both depth and substance in what M Venkaiah Naidu Ji says; there is warmth and wisdom too in what he says."

Modi said Independence Day this year will be celebrated with the president, vice president, Lok Sabha speaker and prime minister being all born in independent India.

"And each of them comes from very humble backgrounds."