PM is dreaming if he says economy is fine: Rahul 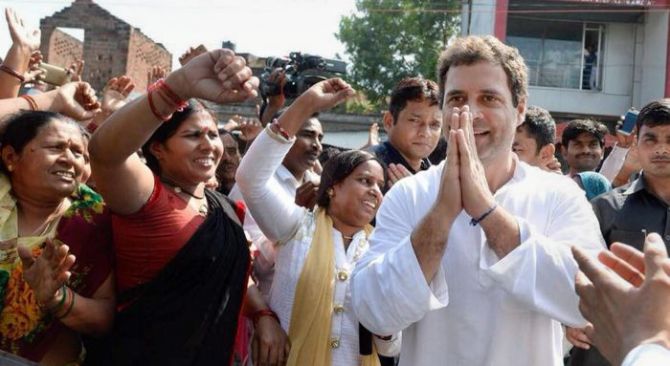 Congress vice president Rahul Gandhi on Thursday questioned Prime Minister Narendra Modi's assertion that the economy is on firm footing and said he was 'dreaming'.

Addressing party workers in his Lok Sabha constituency Amethi, he said the gross domestic product has fallen by two per cent in one go and lakhs of people have become jobless.

Gandhi also took a dig at the '56-inch chest' remark of Modi, saying, "Our Manmohan Singh did not have 56 inch chest but had done a lot of work like bringing MNREGA (Mahatma Gandhi Rural Employment Guarantee Act), loan waiver, right to information (RTI) and right to food."

The Congress leader also appeared to be critical of the bullet train project, saying, "Had rupees one lakh crore been used to improve the railway line, station or freight train, the country would have benefited but Modiji is only interested in gimmicks."

On the second day of his three-day visit in Amethi, he asked Congress workers to question Rashtriya Swayamsevak Sangh on the raging issues like unemployment and farmers suicide.

A day after Modi said the economy was on firm footing, Gandhi said, "Don't know what track he is talking about and what is he dreaming of... economists, newspapers, shopkeepers say that he has spoiled the economy but he says that it is on the right track... he is not ready to hear anyone."

Modi, while lashing out at critics of his economic policies, had said yesterday that he will never jeopardise the country's future for immediate gains and that his government will continue reforms to reverse the GDP slowdown witnessed in the last two quarters.

"Farmers are committing suicide, only 450 (people) get employment, economy has been damaged, still long speeches are being delivered," Gandhi said.

Referring to the demonetisation decision announced on November 8 last year, Gandhi claimed that it was brought without consulting anyone. "Had he (Modi) asked, no one would have advised," he contended.

"The same was done on GST (goods and services tax)," he said, adding that Congress president Sonia Gandhi, Manmohan Singh and P Chidambaram had said that the GST was the Congress' idea 'but you have not understood it ... do not bring five different slabs'.

He went on to add, "Running a government and making false and hollow promises are two different things and today the entire country is aware of it."

Talking about unemployment, he said India's competition is with China but in that country, 50,000 youth get jobs everyday while in India only 450 get employment.

He alleged that 'the BJP people sometime talk of temple, Hindu-Muslim or Jat non-Jat and of dividing the nation'.

Apparently referring to the bullet train project of the National Democratic Alliance government, he said rupees one lakh crore loan has been taken from Japan and the ticket between Ahmedabad and Mumbai will be Rs 4,000.

He told the party workers that 'as soon as RSS people start talking' they should be asked what has been done regarding employment and farmers' suicide.

"You ask them these questions ....you have given jobs to only 450 people, in every state farmers are committing suicide, economy has been spoiled, note ban has snatched jobs from crores of youth crores, 150 people have died, the businesses of small and middle traders have suffered losses," he told the workers.

Gandhi accused BJP governments at the Centre and in Uttar Pradesh of re-inaugurating projects launched by the previous United Progressive Alliance dispensation.

"A new drama has started now... During our (UPA) government, we had undertaken some 10 to 12 works here.... Now they are going about in Amethi telling people that the BJP has done it...tell them (people) that they are telling lies," he said addressing party workers at Tiloi.

"These works have not been done only by Rahul Gandhi but the people of Amethi had come to me, Congress workers had got them done and so you should get its benefit and tell UP and Amethi about them," he remarked.

Earlier, while talking to journalists, Gandhi said, "... our BJP friends are out to re-inaugurate the projects started by us...but I am happy that we initiated these works for the people of Amethi."

He was seeking to take the wind out of the sails of BJP chief Amit Shah, Chief Minister Yogi Adityanath and Union minister Smriti Irani who are scheduled to visit here on October 10 to launch a number of new projects in Amethi.

He also gave a detailed account of the works done during the previous UPA government in the constituency.

"These are our works," he asserted.

IMAGE: Congress vice president Rahul Gandhi during the second day of his visit to Amethi on Thursday. Photograph: PTI Photo