Maharashtra has inspired the country in many areas ranging from social revolutions to self-rule, Prime Minister Narendra Modi said on Tuesday as he inaugurated an underground 'Gallery of Revolutionaries' museum dedicated to the luminaries of the freedom struggle, at the Raj Bhavan in Mumbai. 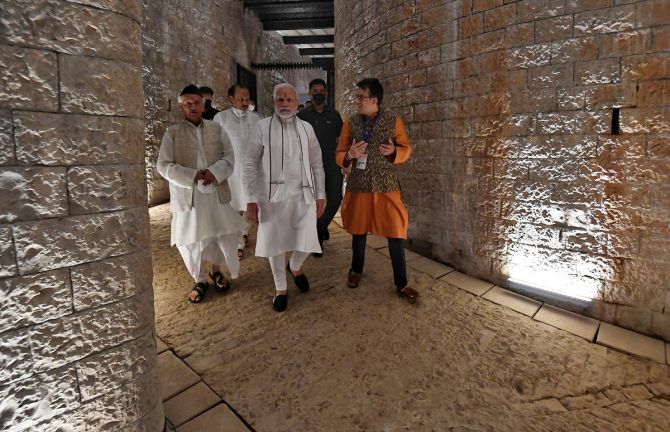 The PM delved into history and highlighted the work done by a number of eminent personalities with roots in Maharashtra, from warrior king Chhatrapati Shivaji Maharaj to chief Constitution maker Babasaheb Ambedkar, and spoke effusively about their contributions.

The gallery has come up in a British-era bunker, discovered in the Raj Bhavan campus in south Mumbai in August 2016 during the tenure of the then-Governor C Vidyasagar Rao.

The bunker had been used by Britishers as a secret storage for arms and ammunition.

Speaking at the event, Modi said the bunker, which was not known to anyone for years and used to store goods that were once used against Indian revolutionaries, now has a gallery with their names.

"The bunker which used to store goods that were once used against Indian revolutionaries, the same bunker has our revolutionaries' names," the PM said.

“Maharashtra has inspired the country in many fields. If we talk about social revolutions, there is a very rich legacy of social reformers, from Jagatguru Sant Tukaram Maharaj to Babasaheb Ambedkar," Modi said.

He said saints from Maharashtra like Dnyaneshwar, Namdev, Samarth Ramdas and Chokhamela have given energy to the country.

“If we talk about Swarajya (self-rule), then the life of Chhatrapati Shivaji Maharaj and Chhatrapati Sambhaji Maharaj still strengthens the feeling of patriotism in every Indian,” Modi said.

The prime minister said Mumbai is a city of dreams, but there are many cities in Maharashtra which are going to be the growth centres of the country in the 21st century.

"With this thinking, on one hand, the infrastructure of Mumbai is being modernised and at the same time, latest facilities are being provided in other cities as well," he stated.

Remembering Indian revolutionary Shyamji Krishna Varma, who founded the India House in London and stayed abroad, Modi said the freedom fighter's only wish was that his ashes be brought to an independent India.

Modi said in 2003, after 74 years of Varma's death, he got the opportunity to bring his ashes to India.

The PM cited the Gadar Party, Netaji Subhas Chandra Bose-led Azad Hind Fauz and India House of Shyamji Krishna Varma as examples of the global scale of the freedom struggle.

“This spirit from local to global is the basis of our Aatmanirbhar Bharat Abhiyan (a campaign to make India self-reliant)," he said.

Modi said when there is a talk about India's independence movement, knowingly or unknowingly, the discussion is limited to a few incidents.

"India's independence has involved the austerity of countless people and their hard work. The collective impact of many incidents at the local level was felt at the national level.

The means (deployed by freedom fighters to achieve independence) were different but the resolution was the same," he said.

Modi noted that irrespective of social, family, ideological roles or the place of the movement, whether within the country or abroad, the goal of freedom fighters was one - complete independence of India.

Jal Bhushan has been the official residence of the Governor of Maharashtra since 1885.

Upon completing its lifespan, it was demolished and a new building was sanctioned in its place.

The foundation stone for the new building was laid by President Ram Nath Kovind in August 2019. All distinctive features of the old structure have been preserved in the newly constructed building.

Modi said the new building has been built keeping in mind its heritage.