Congress leader Rahul Gandhi Wednesday said the Opposition was united in demanding a discussion on the Pegasus snooping row in Parliament in the presence of the prime minister or the home minister. 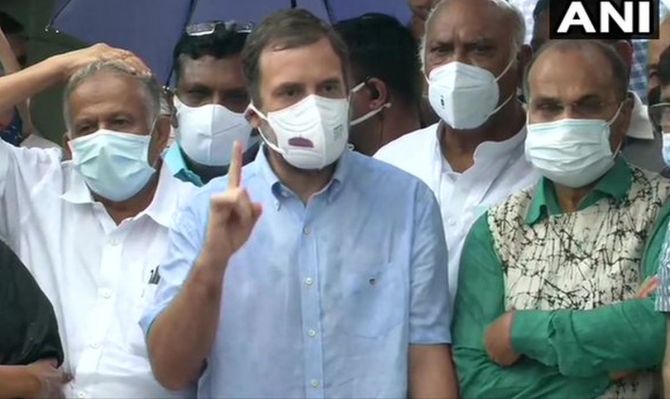 He rejected the government's charges over the disruption of Parliament and said the Opposition was only fulfilling its responsibility.

He also attacked the government over the Pegasus snooping row, accusing Prime Minister Narendra Modi and Home Minister Amit of "hitting the soul of India's democracy".

The voice of Opposition was being suppressed in Parliament, he alleged. "We are only asking if the government bought Pegasus and snooped upon Indians."

"We are not disturbing Parliament, we are only fulfilling our responsibility," he said.

He also said the Pegasus row "for us is an issue of nationalism, treason". "This is not a matter of privacy. It is an anti-national work."

He said the Opposition was united over the issue.

The government has been rejecting all Opposition charges over the issue.