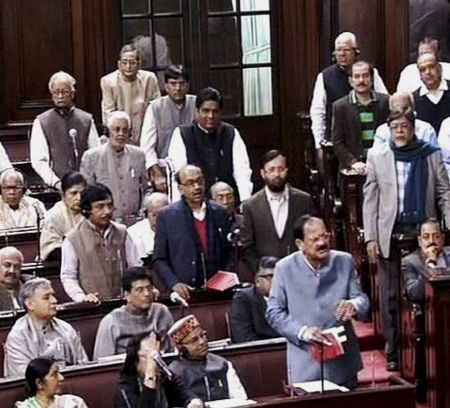 Rajya Sabha failed to transact any business for the fourth straight day on Thursday as opposition kept demanding a reply by Prime Minister Narendra Modi to a debate on religious conversions which the government ruled out.

The PM was present in the House during the Question Hour but this segment was consumed by arguments between the opposition and treasury benches over procedures of a debate on the communal incidents in the country.

Opposition and treasury benches traded charges of “arrogance” and accused each other of not being serious to have the debate which was listed, resulting in repeated clashes and uproar.

There was also disagreement on whether to use the words “attack on secular fabric” in the name of the debate.

The House was adjourned repeatedly before the Chair finally called it a day at around 2.45 pm.

In the face of continued demand, Leader of the House and Finance Minister Arun Jaitley said the government was ready to debate the issue immediately but asserted that opposition cannot dictate who will reply from the government side and what will be the terms and conditions.

“In this very House, the PM made a statement on request of opposition... Three days after the PM’s statement, the House was not allowed to function... I repeat the government’s (offer). If they want (discussion), let it start just now,” Jaitley said.

Ruling out a reply by the PM, Parliamentary Affairs Minister Venkaiah Naidu said as per the rules the home minister will reply after the debate as the issue relates to his ministry.

Amid the arguments and counter arguments, the House was adjourned for lunch break. When the House reassembled at 2 pm, the PM was not present, triggering protests from the opposition benches.

Demanding his presence, Opposition members like Sitaram Yechury from the Communist Party of India-Marxist, however, argued that the ambit of the debate goes beyond the mandate of the home ministry and hence only the PM can reply.

He was supported by Deputy Leader of Congress Anand Sharma and other opposition members, including K C Tyagi from Janata Dal-United.

Amid heated arguments, Home Minister Rajnath Singh rose to say, “Before lunch, there was consensus on the discussion and at that time the PM was present in the House. The discussion could have been started and the PM might have intervened.”

Noting that there is certain sanctity associated with the post of the PM, he said since the issue is about internal security, he is in-charge and he would be replying to the debate in the House.

“If members are not satisfied with my reply, there can be possibility that the PM may intervene... But I am sad that the PM was here and despite that opposition did not allow discussion on this serious issue,” he said.

Kurien asked Anand Sharma to initiate the debate, but he refused to budge from the demand. Later, he asked Digvijay Singh from the Congress to speak as his name was first on the list.

When Singh too refused to speak, Kurien asked Rajeev to begin the debate. “It was your motion. It is conceded. You have to start the discussion,” he said.

Peeved over the opposition members’ demand, Minister of State for Parliamentary Affairs Mukhtar Abbas Naqvi said, “Don’t give sermons to us. Give sermons to your members. We will give reply, but you start the discussion...You cannot dictate the government.”

K C Tyagi from the Janata Dal-United said the home minister gives a lengthy speech and hence the PM should reply.

Taking offence to this, Commerce Minister Nirmala Sitharaman said, “When the home minister gets up to speak, whether lengthy or short, it should be respected. To say his speech as lengthy, I feel bit hurt.”

Tyagi later clarified that he was cracking a joke.

Anand Sharma raised a point of order, saying, “As per the rule, if an assurance given by any minister is violated (then) that minister can come and reply. If assurances are violated repeatedly, only PM can come.”

To this, the Chair said the member should take recourse to the Assurance Committee.

Taking a dig at Sharma, Naqvi said, “I have sympathies with you and other members. Every time, they look for excuse and new stories. That will harm you and your party. You should think something new.”

Image: NDA leaders take a stand against the opposition in the Rajya Sabha. Photograph: PTI photo