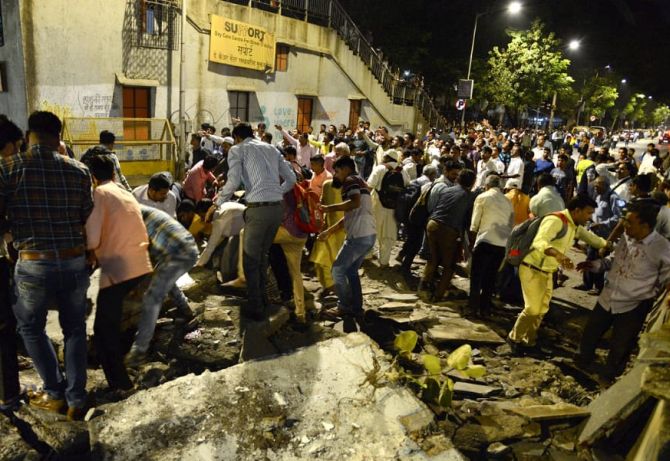 Prime Minister Narendra Modi on Thursday expressed deep anguish over the loss of lives in the Mumbai foot overbridge collapse.

'Deeply anguished by the loss of lives due to the foot overbridge accident in Mumbai. My thoughts are with the bereaved families.

'Wishing that the injured recover at the earliest,' Modi tweeted.

He said the Maharashtra government was providing all possible assistance to those affected.

Union home minister Rajanth Singh said, 'The collapse of a foot Overbridge in Mumbai is deeply saddening. My thoughts are with the families who lost their loved ones in this accident. I pray for the speedy recovery of the injured.'

'I am saddened on hearing the news of the Mumbai foot overbridge collapse. I express my heartfelt condolences to the families of those who have died. I pray that injured get relief soon,' said Congress president Rahul Gandhi in tweet in Hindi.

'After the Elphinstone tragedy, the footover bridge outside CSMT has collapsed despite being structurally audited just six months ago. This is absolutely unacceptable. An FIR should be filed under IPC Section 302 against BMC officers responsible for this negligence,' Deora tweeted.

'FOB collapse tragedy at #CSTMumbai is nothing but negligence on the part of #BMC and Railways. Lack of coordination between these 2 agencies has put lot of bridges in danger in Mumbai which is costing the lives of Mumbaikars. #cstbridgecollapse,' Mumbai Congress president Sanjay Nirupam tweeted.