Prime Minister Narendra Modi was Wednesday briefed on the country's internal security situation and how to improve it by taking people- friendly initiatives. 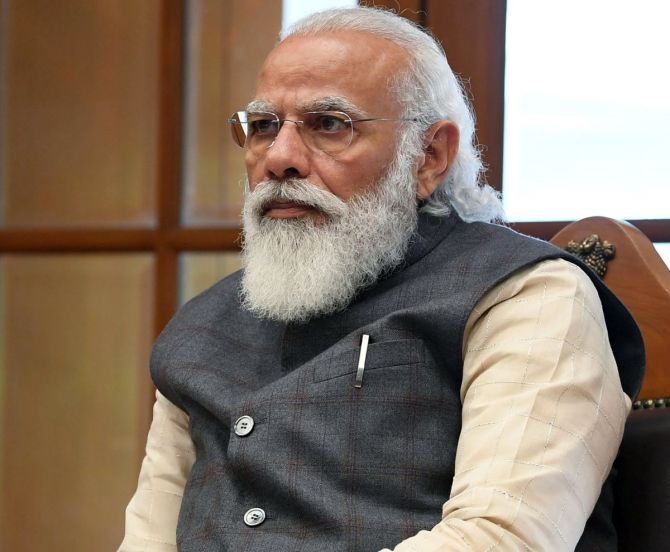 A review of the internal security situation was presented to the prime minister and Union home minister Amit Shah at the 55th annual DGPs and IGPs conference, being held virtually, on the inaugural day.

Modi joined the conference virtually and reviewed the action points of the previous conference, an official statement said, adding discussions were held to improve the overall security scenario with more people-friendly initiatives, it said.

In his inaugural address, Shah highlighted policy issues on national security and applauded the role of police as frontline warriors in crisis and disaster management.

He emphasised that there should be zero tolerance against terrorism.

While stressing upon the need to ensure safety and dignity of the citizens, he underlined the importance of capacity building of police to deal with emergency situations and disasters.

Shah directed that security agencies should have a coordinated approach in national security scenario and achieve the target of making India a developed and safe nation.

A session on various initiatives of security forces on Left-wing extremism front was held in which discussions were held to improve security situation in Maoist-hit areas.

Stress was given on coordinated action with states to check the Left-wing extremism menace, the statement said.

Discussions on role of police during COVID-19 pandemic and implementation of safety protocol by the police were also held besides follow-up actions being suggested to develop an SOP to manage various types of emergency situations, it said.

Top officers in the rank of DGP and IGP from all states, union territories and central government are taking part in the four-day virtual meet, organised by the Intelligence Bureau.

This is for the first time ever, the annual conference of the country's top police brass is being held virtually amid the coronavirus pandemic.

According to an estimate, nearly 80,000 police and paramilitary personnel were infected by COVID-19 in the country and about 650 of them succumbed to the virus.

There has been considerable change in the format, venue, topics covered, deliverables in the DGPs and IGPs conference since 2014.

The number of business sessions and topics have increased significantly with focus on improving policing in service of people, an official said.

Before 2014, deliberations largely focused on national security matters only.

Since 2014, these conferences have a twin focus of national security as well as core policing issues, including prevention and detection of crime, community policing, law and order, improving police-image etc, the official said.

The DGPs and IGPs conference is an annual affair where senior police officials of the states and the Centre meet and discuss issues of importance.

The Modi government has been organising it outside the national capital since it came to power in 2014.

The previous conferences were held in Guwahati, Rann of Kutch in Gujarat, Hyderabad, Tekanpur in Madhya Pradesh, Kevadia in Gujarat and Pune.