Delhi Chief Minister Arvind Kejriwal on Monday announced setting up of a 'plasma bank' for treatment of COVID-19 patients in the national capital, and said it will start operating in the next two days. 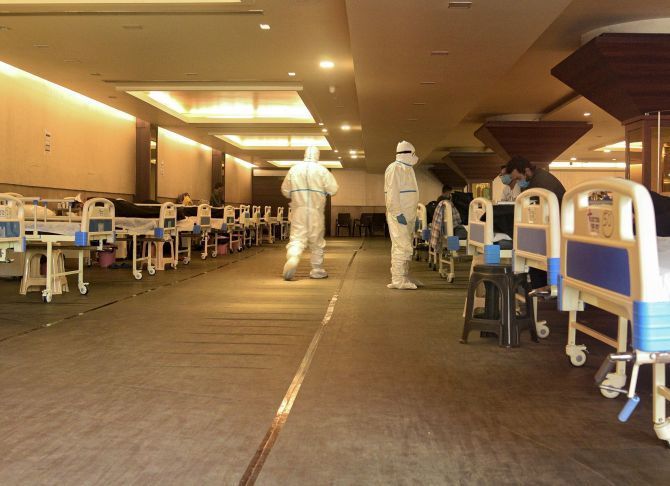 Addressing an online media briefing, he said the bank will be set up at the Delhi government-run Institute of Liver and Biliary Sciences and doctors or hospitals will have to approach it for plasma if a COVID-19 patient needs the same.

The chief minister said that the Aam Aadmi Party government will encourage those who have recovered from COVID-19 to donate their plasma. A helpline will also be set up by for queries related to donation of plasma.

He said that his government will make transportation arrangements for those willing to donate their plasma.

"The plasma bank will be first of its kind for the treatment of COVID-19 patients. Perhaps, it will be the first plasma bank in the country," he said.

The need of setting up such bank was felt when people were running from pillar to post to get plasma, he said, adding that both government and private hospitals will be able to get plasma from the facility.

Kejriwal, however, said that plasma therapy is not a "sanjeevani booti" (divine herb).

In the plasma therapy, antibodies from blood of patients, who have recovered from coronavirus, are used to treat infected patients.

It is aimed at assessing the efficacy of convalescent plasma to limit complications in COVID patients.

Kejriwal said that his government has so far conducted clinical trial of plasma therapy on 29 COVID-19 patients and the result was 'encouraging'.

Delhi Health Minister Satyendar Jain, who had tested positive for COVID-19, was administrated plasma therapy. He has now recovered.

The chief minister said that in the LNJP Hospital, plasma therapy was conducted on 35 COVID-19 patients and of them, 34 lives were saved and one patient died. Similarly, 49 patients were administrated therapy in private hospitals and 46 people recovered from the virus.

Requesting people to come forward and donate their plasma, he said, "In the entire life, there is a very little chance to save someone's life and you (those recovered from COVID-19) have got this chance."

Kejriwal said relatives of a COVID-19 person are free to give plasma to the patient and it is not necessary to only donate to the bank.

He asserted that there is no shortage of beds in the national capital as several steps have been taken to effectively deal with the COVID-19 situation.

On Sunday, Delhi recorded 2,889 fresh coronavirus cases, taking the tally in the city over the 83,000-mark, while the death toll from the disease mounted to 2,623.

The number of containment zones in the city also jumped to 421 on Sunday from 280 after the re-mapping of such areas.

Kejriwal also announced an ex gratia of Rs 1 crore for the family of a senior doctor of the government-run LNJP Hospital who died battling COVID-19, and said the society has 'lost a very valuable fighter'.

The 52-year-old doctor served in the front line of the war against the pandemic at the government facility, and died of novel coronavirus infection in an ICU of a private hospital on Sunday.

"Dr Aseem Gupta was a senior doctor, and was serving COVID patients for the last few months with his duty being in the ICU. His colleagues speak about the dedication and commitment with which he served patients," Kejriwal said in the online press briefing.

The chief minister said, his wife, also a doctor, had contracted COVID-19 too, but has now recovered.

"It is because of people like him that we have been able to fight COVID-19. He is a big inspiration to us and we bow to his spirit of service to humanity.

"As a mark of honour, Delhi government will offer an ex gratia of Rs 1 crore to the family of Dr Gupta," he said.

The chief minister also said that this is a small amount and someone's life is priceless.

The amount will be given by the government on behalf of the country, and the people of Delhi, for the services rendered by the doctor, he said.

Earlier in the day, he had tweeted to pay tribute to Dr Gupta, who was battling the disease for the last two weeks at Max Hospital, where he succumbed to the illness early in the morning on Sunday.

'Dr Aseem Gupta, a senior doctor of LNJP Hospital succumbed to Covid yday. He was known for going out of his way to serve his patients. We have lost a very valuable fighter. Delhi salutes his spirit and sacrifice...,' Kejriwal tweeted.

The chief minister also said in his tweet that he has spoken to his wife and 'offered my condolences and support'.

"I spoke to his wife this morning, and had an extended talk," he told reporters.

LNJP Hospital is a dedicated COVID-19 facility under the Delhi government. It recently completed 100 days of being declared a coronavirus facility.

A condolence meeting to pay respect to Dr Gupta was held in the office of the Medical Director of the hospital, a senior official said.

Lt Governor Anil Baijal also tweeted to express his condolences: 'Deeply saddened at the death of Dr Aseem Gupta of LNJP who served tirelessly in fight against COVID-19. He was a great warrior who brought glory to the frontline doctors and health workers. My utmost sympathies are with family members !.'

The LNJP Hospital in a statement on Sunday had said, 'He was a frontline anaesthesia specialist who contracted COVID-19 infection while on duty.

'He tested positive on June 6, when he had mild symptoms and was shifted to a quarantine facility.

'His symptoms aggravated on June 7 and he was admitted in the Intensive Care Unit of the LNJP Hospital.

'He was shifted to Max Hospital, Saket on June 8 on his request,' it said.

He was Specialist, Grade I, in the Department of Anaesthesia at the LNJP Hospital, the statement said.

Several hundreds of healthcare workers have been infected with COVID-19 till date in Delhi.

Kejriwal in his tweets also praised the city government-run facility, 'LNJP Hospital has displayed great fortitude in the face of acute challenges. It's recovery rate is going up, death rate is reducing, ICU capacity is being ramped up - the hospital is saving so many lives.'