Cargo plane with rifles from Dubai lands in Chennai

Source: PTI
February 23, 2010 21:18 IST
A mysterious consignment of 10 AK-47 rifles along with telescopes landed here in a cargo plane three days ago and now security agencies are hot on trail of a man from Uttar Pradesh.

Yusuf, a resident of Varanasi and a Customs Clearing agent, is on the run and the police are looking for him after a person to whom the cargo was addressed claimed he had nothing to do with it.The cargo plane from Dubai landed at Anna International Airport on February 20 and the consignment including 10 rifle scope (AK-47 rifles and telescopes) was marked for a person identified as Vijayan, official sources said in Chennai on Tuesday.

They said the Customs department registered a case and carried out a thorough check of the cargo after which it summoned Vijayan and his customs clearing agent Yusuf. There was no mention about the presence of arms in the inventory by the cargo company, they said.While Vijayan, who had arrived here from Dubai on February 12, pleaded ignorance about the arms, his clearing agent did not turn up for questioning.

Raids were carried out at various places to trace Yusuf, but no breakthrough has been achieved so far.The Uttar Pradesh police has been informed about the case and efforts were on to nab him. 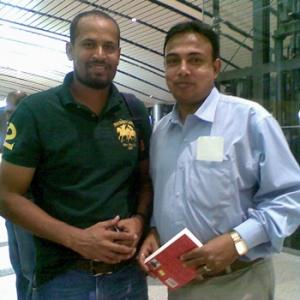