The Bharatiya Janata Party is not in a hurry to stake claim to form the government in Maharashtra but will wait till the rumblings in the Shiv Sena take its toll on its strength at the level of municipal corporations in cities and civic bodies in towns and districts, a senior BJP leader claimed in New Delhi. 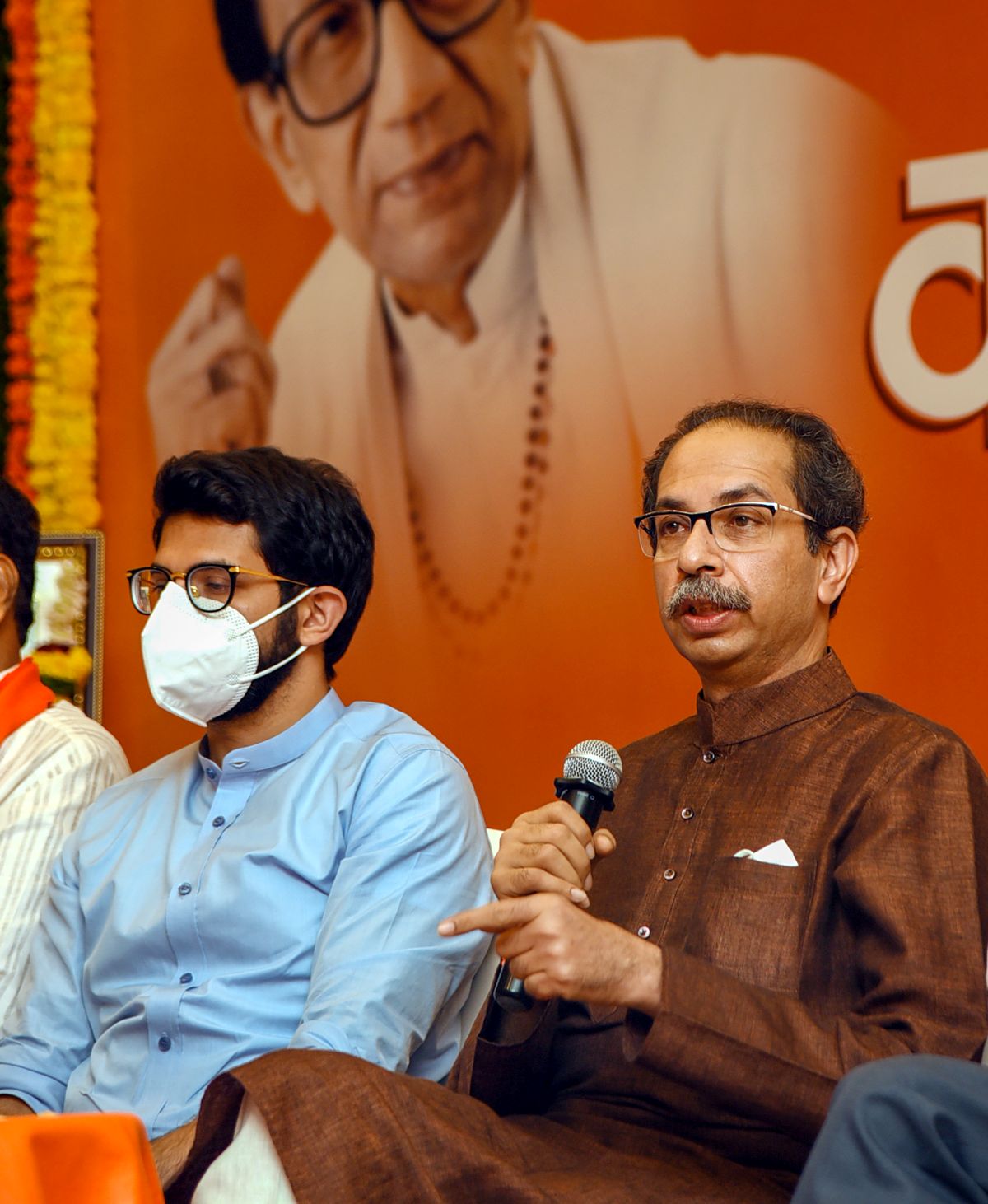 IMAGE: Maharashtra CM Uddhav Thackeray and Aaditya Thackeray during a meeting with Shiv Sena MLAs on the occasion of the party's 56th Foundation Day in Mumbai. Photograph: PTI Photo

The current power struggle in Maharashtra is not merely for a regime change in the state, but a concerted effort by the BJP to wean away the supporters of the Shiv Sena and consolidate its hold on the Hindutva issue, he explained on condition of anonymity.

The BJP leader further said the first step in this direction was strengthening the Shiv Sena camp led by Eknath Shinde by ensuring the presence of maximum rebel MLAs by his side by pledging to uphold the ideals of Sena founder Balasaheb Thackeray.

The BJP was extremely upset with Uddhav Thackeray's "betrayal" after the 2019 Maharashtra assembly elections when he joined hands with the Nationalist Congress Party and the Congress, breaking the decades-old saffron alliance, he added.

While the rumblings in the Shiv Sena camp date back to the formation of the Maharashtra Vikas Aghadi government, sired by NCP supremo Sharad Pawar, the final act came into play during the counting of votes of the Legislative Council elections on June 20.

Shiv Sena leaders got a whiff of something being amiss when the counting of votes was halted for a couple of hours on Monday evening over some objections and counter-objections raised by the BJP and the MVA partners.

Shinde had led the initial group of rebel MLAs across the state border into Gujarat, setting in motion the plans to break the Shiv Sena. A key reason for Shinde being upset was the tight control of the chief minister and his confidants on the crucial urban development portfolio held by the rebel leader.

On instructions from the central leadership, Maharashtra BJP leaders have retreated behind a veil of silence, the senior leader said.

Asked how the state intelligence machinery failed to get wind of the impending troubles, he claimed that Thackeray had deputed a senior minister and confidant to receive daily intelligence briefings meant for the chief minister.

The Shiv Sena-NCP-Congress MVA government plunged into a crisis when Shinde walked away with a large chunk of Sena MLAs and stationed himself first in Surat and later, at a luxury hotel in Guwahati, criticising Thackeray's style of functioning.

The number of rebel MLAs in the Shinde camp has swelled over the past few days, raising questions on the continuance of the MVA government.