Chinese military plans to introduce robot cooks and high-efficiency energy-saving stoves to reduce labour intensity even as it launched campaign to stop food waste and cultivate thrifty habits in the military under the "clean plate" campaign launched by President Xi Jinping. The above measures were aimed at improving the mechanisation and intelligence of meal making, reduce the labour intensity and energy consumption of cooking, it said.

"We should improve the cooking and processing methods, making coarse dishes fine, fine dishes exquisite and make one dish in multiple ways, eliminate over-processing and luxurious cooking, increase the number of steamed dishes, reduce the variety of deep-fried dishes and reduce the consumption of cooking oil”, it said.

Also the Logistic Support Department of China's Central Military Commission, the overall high command of the PLA, has recently made arrangements to stop food waste and cultivate thrifty habits in the military by promoting several reform measures to improve the troops' food management and production, and strengthened corresponding supervisions and inspections at the same time.

"Different from the previous campaign, which was aimed at putting an end to officials' extravagant feasts and receptions, the 2.0 version calls for the public to stop wasting food,” official media reported last week.

As for troops in field training exercise or military tasks, military food supply should be the main source in form of fast-food support, to achieve the goal of reducing food loss and waste and improving support quality and efficiency at the same time, the report said.

Units at all levels should promote the standardisation of daily menus, fully implement the individual serving system, it said. 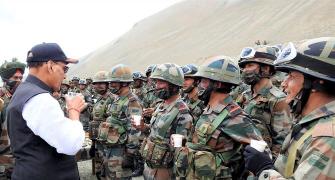