In the wake of border clashes along the Sino-Indian border, but harking back well before that, the People's Liberation Army's (PLA) has been bolstering its defensive networks along the undemarcated Line of Actual Control (LAC). 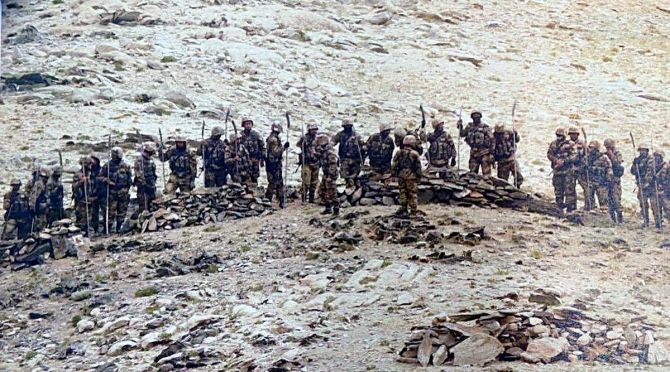 IMAGE: PLA soldiers armed with stick-machetes during their deployment along the Line of Actual Control in eastern Ladakh. Photograph: ANI Photo

In fact, given the current tensions and massed troops on both sides, there is a danger that the LAC will become more like the Line of Control with Pakistan, a heavily fortified and strongly defended border where weapon fire exchanges regularly occur.

Indeed, Stratfor Worldview research has listed a sharp increase in new Chinese facilities along the LAC in 2019-20.

'The 2017 Doklam crisis appears to have shifted China's strategic objectives, with China more than doubling its total number of airbases, air defense positions and heliports near the Indian border over the past three years.

'The rapid expansion of permanent Chinese military infrastructure points to intentions that span a wider timeframe than current and recent border standoffs.'

The Stratfor article continued, 'China's strategy aims to confront India with an insurmountable challenge in territorial disputes by leaning on broad support capabilities that provide Beijing with a tremendous ability to mobilise forces into disputed border areas.

'Such an approach is similar to China's strategy in the South China Sea, where a build-up of permanent defense facilities supports Chinese localised military superiority and significantly raises the potential cost of military opposition to Beijing's maritime claims in the region.

'In applying this same strategy on the Indian border, China aims to discourage Indian resistance or military action during future border disputes by ostentatiously demonstrating its ability and intent to engage in military confrontations.'

One important difference along the LAC compared to the South China Sea, however, is that the former is solely a military confrontation.

In the latter, China can use its coast guard or maritime militia in 'gray-zone' contingencies to assert its claims.

With no other players existing in isolated sections of the LAC, activity is confined purely to military operators.

New infrastructure development supports this -- for example, new aircraft shelters are being built that make it harder to observe planes.

The PLA Air Force (PLAAF) has been operating H-6 bombers from Kashgar Air Base, these loaded with KD-63 land-attack cruise missiles.

Similar bombers have also appeared at Golmud in Qinghai Province, along with Y-20 transporters, while the presence of 18 helicopters there suggests they could be rehearsing special forces heliborne operations.

Tack concluded, "By forcing India to respond in kind, China's aggressive strategy is leading to a greater concentration of military assets in heavily disputed areas along the border that could raise the risk of potential escalations and sustained conflict."

Correspondingly, India announced on 14 September that it would build six new runways and 22 helipads across Ladakh.

"Efforts by both India and China to translate these capabilities into dominance during future border disputes will increase the possibility of direct confrontations.

"And with strong logistical structures supporting frontline forces on both sides, such incidents could rapidly devolve into greater military engagements between the two nuclear-armed neighbours," Tack bleakly forecast.

As mentioned, the PLAAF has stiffened its SAM defenses, with several new HQ-9 sites under construction along the LAC.

An existing deployment is at Gonggar, but new sites have appeared at Manasarovar (opposite Uttarakhand), Shigatse, Pagri (bordering Bhutan and Sikkim) and Nyingchi.

This suggests the PLAAF has weakened its air defenses elsewhere to bolster strength in Tibet.

Both sides accuse each other of firing shots along the LAC, the first time this has occurred in 45 years.

Despite ministerial-level talks agreeing to disengage, both sides continue to mass troops along the border. The threat of further confrontation is definitely real.

Oriana Skylar Mastro, a Center Fellow at the Freeman Spogli Institute for International Studies at Stanford University, discussed for the Lowy Institute in Australia how an armed Sino-Indian conflict could be resolved if it did occur.

"Unless India is squarely defeated and thus cannot continue to fight, or China decides to withdraw unilaterally again, the war may drag on for longer than either side wants."

She said power asymmetries matter, since it is less risky for two evenly matched opponents to talk whilst still fighting since neither can be classified as the loser.

"While India does enjoy some local advantages, Chinese conventional military power is superior to that of India. If China enjoys undisputable operational success, Beijing will likely offer talks quickly to the Indian side. China would do so to lock in any territorial gains with a peace agreement if India agrees, and looks reasonable in the international community's eyes if New Delhi refuses."

Mastro continued, "India's calculations will likely be the opposite. Rhetoric on how China believes India to be weak, and the need to stand up to Chinese aggression, will surge.

"Any Indian politician that suggests talking with the Chinese will be attacked. In other words, unless India is squarely defeated and thus cannot continue to fight, or China decides to withdraw unilaterally again, the war may drag on for longer than either side wants."

There are complicating factors, however, such as any US support for India. Russia is friendly to both India and China, and it could emerge as a mediator.

Mastro concluded, "Complex calculations about how the enemy will interpret and respond to a willingness to talk create an extra obstacle to peace when wars break out. This means high costs even if the war stays at the conventional level, because it is likely to drag on.

"The other possibility is that the war ends quickly because China secures a decisive victory. But this scenario does not bode well for the future either. It would leave the world with a weaker India and emboldened China."

In recent weeks it is significant to note that China has revived a claim on a 'very clear' border demarcation dating from 1959, as elaborated in a letter that Chinese Premier Zhou Enlai sent to Prime Minister Jawaharlal Nehru.

This is the first time in decades that China has tacitly spelt out its stand on the boundary.

Furthermore, plotting the presence of new Chinese outposts shows a clear intent by the PLA to enforce what it believes to be its legitimate 1959 territorial claim.

This all amounts to dissipation of relatively soft stances on the border demarcation in recent decades.

There are particular hotspots too.

M Taylor Fravel, a political science professor at the Massachusetts Institute of Technology, stated that Chinese claims on the southern bank of Lake Pangong lie to the west of India's perception of the LAC.

"In fact, it may be one area where China's claims lie beyond its view of the LAC. Thus, this is a potentially volatile area."

China has never enunciated any motive for its actions in the Galwan Valley and nearby locales, instead preferring to blame India's 'false confidence and strategic aggression'.

In the absence of any official explanation from China for its unilateral actions along the LAC, it is useful to glean some degree of understanding on Chinese thinking from other sources. One is a July article entitled 'The behavioral logic of India's tough diplomacy toward China' written by Hu Shisheng, Director of the Institute of South and Southeast Asian and Oceanian Studies at the China Institutes of Contemporary International Relations (CICIR).

As expected, he echoed the Chinese Communist Party talking points, but his comments give insights into Chinese thinking, even though each point is debatable from an Indian perspective.

Hu claimed the Galwan Valley incident was 'accidental', but ultimately he blamed reckless Indian commanding officers and India's forward policy along the border. Indeed, he named the root cause a Delhi's illusory 'quest for absolute security'.

He described an ongoing 'salami slicing' policy, with claims that Indian troops had crossed the LAC some 1,581 times in 2019 (of which 94 per cent were in the western sector).

Hu argued that India was seeking to cause an incident in Galwan 'because of Chinese military activities against the Darbuk-Shyok-Daulat Beg Oldie Road'.

Ironically, this in itself is an admission that the PLA was reacting to this highly strategic route that permits Indian military access to Siachen Glacier.

Politically, Hu named the 'influence of conservative politics' under Prime Minister Narendra Modi, as well as a diversionary tactic of the government to avert domestic attention during the COVID-19 pandemic.

He asserted that 'Make in India' as a policy has not been a success, as the industrial sector only contributes 15% to Indian GDP, the lowest amount in the past 50 years.

"Coexistence between China and India is particularly hard to achieve because, after World War II, one newly born country has sought to negate the colonial order, while the other is the successor of the colonial order."

Hu believes India is an advantageous position because of current Sino-US tensions, which increases Delhi's strategic value to Washington and the West, though Modi 'is failing to turn this into an engine of national rejuvenation'.

Nonetheless, it is fueling a tough foreign policy towards China, even while Beijing suffers from a deteriorating security environment because of a united international anti-China front, restructuring of supply chains and an anti-globalisation movement.

The CICIR director likened this to China in 1959-62, when 'India challenged China at the border' and purportedly precipitated the 1962 war.

Thus, the state of their shared border is a 'vivid reflection of great power geopolitics'.

Hu pessimistically assessed that China-India relations have 'entered a period of high volatility'.

The alternative is to change course and return to 'win-win cooperation', although he did not mention how this can be achieved.

The CICIR piece made no effort to analyse Chinese actions and policies, instead of focusing on broader structural differences between the two protagonists. Of course, the blame was placed entirely on India due to China's innate blamelessness!

This kind of finger-pointing is typical of China. A recent Xinhua commentary asserted, "The responsibility lies entirely with the Indian side ... Adopting a defensive military strategy, China has no intention to stir up border tensions or seek military expansion. However, it allows no infringement on its core interests."

The same opinion piece added, "It is time for the Indian side to wake up to reality, take a responsible attitude toward the bilateral relationship and stand on the right side of history."

This long-running border confrontation has turned into a show of strength between two nuclear-armed neighbours.

Each interprets the clash as emanating from 'unilateral changes' by the other side, and there will be cost implications in terms of logistical support and even casualties to the climate and altitude as winter weather worsens.

India knows it is at risk if it escalates a military confrontation and Beijing counter-escalates.

However, Delhi must raise the cost of any Chinese challenge to the border's demarcation, so now it must exhibit resolute strategic patience.

Despite ongoing security tensions all around China's fringes, it seems the PLA has no shortage of people wanting to sign up.

This was despite recruitment drives in the first half of the year being postponed because of COVID-19.

The government said there was 'growing Importantly, there is a rising proportion of college recruits and graduates among applicants'.