Yeddyurappa has 15 days to prove his majority in the assembly. 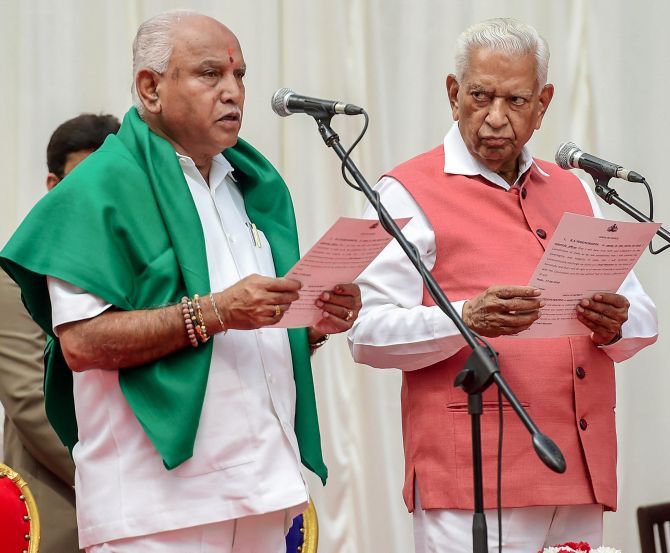 With his political future hanging by a slender thread, B S Yeddyrappa was on Thursday sworn in as the chief minister of Karnataka for the third time amid protests by the Janata Dal-Secualr-Congress combine whose MLAs hunkered down in resorts and hotels following alleged attempts at poaching by the Bharatiya Janata Party.

Yeddyurappa was administered the oath of office and secrecy by Governor Vajubhai Vala, who controversially invited him to form the government on Wednesday despite the BJP falling short of majority.

The 75-year-old Lingayat strongman took the oath alone, in a reflection of continued uncertainty over the longevity of his term in office after the newly formed JDS-Congress alliance knocked the door of the Supreme Court to stall government formation.

Though the court did not stay the swearing-in, it kept the sword of Damocles hanging over him, making it clear that his stay at the helm of the state's affairs will be subject to the outcome of the case.

Attired in his trademark white safari suit and a green shawl draped around his shoulders, Yeddyurappa took the oath in the name of god and farmers amid loud chants of "Modi, Modi" at a low-profile ceremony at Raj Bhavan.

Prime Minister Narendra Modi and BJP chief Amit Shah, who are usually present at the swearing-in of party chief ministers, were absent. 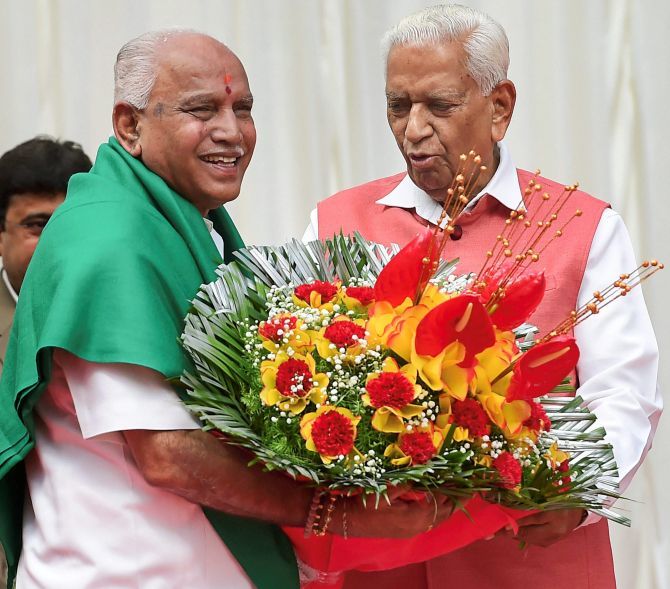 Despite the BJP having secured 104 of the 222 seats for which polling was held, eight short of a majority, and facing the challenging task of rustling up the numbers to stay afloat, Yeddyurappa exuded confidence that he would win the confidence vote about which he was "100 per cent sure".

Vote was taken for only 222 seats following deferment of polling in R R Nagar constituency over allegations of electoral malpractices, and countermanding of election to Jayanagar seat due to the death of the BJP candidate.

"I am sure of winning the vote of confidence and my government completing five years," Yeddyurappa, who has been given a 15-day window by the governor to prove his majority, told reporters.

"I am not going to wait till 15 days, the time period Governor Vajubhai Vala gave, to prove majority in assembly. I am keen to do it as soon as possible," he said.

He flayed the JD-S and the Congress for having entered into an "unholy alliance" to "grab" power in spite of people having "rejected them outright".

Even as Yeddyurappa was taking oath at Raj Bhavan, Congress and JD-S leaders sat at the feet of Mahatma Gandhi's statue at Vidhana Sauda, the state secretariat, to protest against the governor's decision.

"We have gone to the court....we will go to the people. We will tell them that they (the BJP) have no faith in democracy....parliamentary democracy," he said. 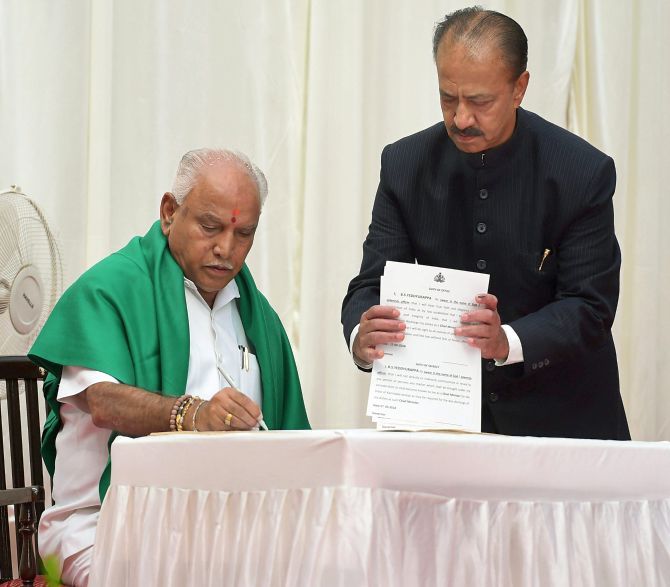 Congress MLAs, who were lodged at Eagleton Resort under the watch of resourceful party MLA and minister in the Siddaramaiah government D K Shivakumar, were brought to the venue for some time before being herded back. The newly elected JD-S MLAs are staying at a hotel in the state capital.

Attacking the prime minister, Kumaraswamy said he was out to "demolish" democracy.

Calling the governor's decision "unconstitutional", he claimed the prime minister was using central agencies like the Enforcement Directorate to threaten Congress and JD-S MLAs to break ranks and support the BJP government.

"How this central government is behaving? This Narendra Modi's government wants to demolish democracy in the country," Kumaraswamy told journalists.

He said it was probably for the first time that a party without majority was given 15 days to prove it on the floor of the house.

"They are threatening and putting pressure on MLAs," he said. 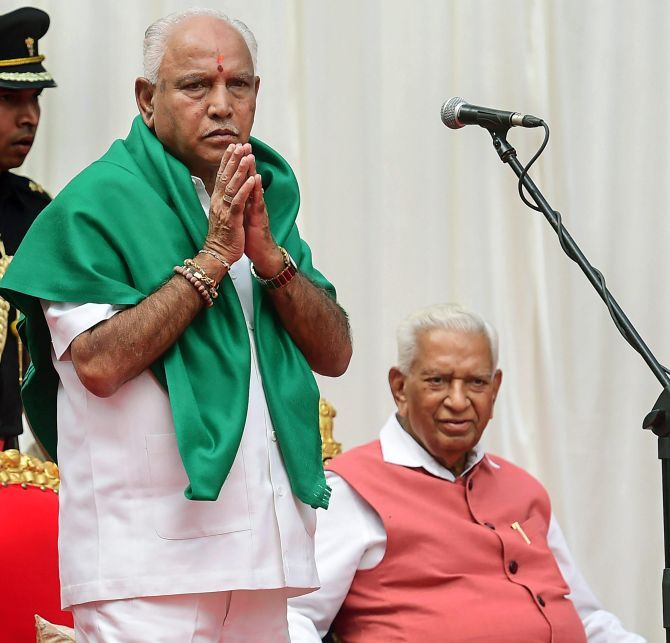 With Congress MLA fromVijayanagara Anand Singh remaining incommunicado amid speculation about his rejoining the BJP, Kumaraswamy claimed the ED was being used to pressure him due to a pending case.

"I have not spoken to Anand Singh. One of the Congress MLAs told me that Singh called him and expressed his problem stating that (central government) offices are being used to pressurise him," he claimed.

The JDS-Congress combine has 115 MLAs, besides the support of one of JD-S' pre-poll ally the BSP. It has also claimed support of an independent MLA.

Yeddyurappa became the chief minister for the first time in November 2007 but his term in office lasted just seven days as the JD-S reneged on a power sharing arrangement and walked out of the alliance.

He was made the chief minister once again after the BJP came to power in May 2008 but had to step down in July 2011 following his indictment by the then Lokayukta N Santosh Hegde in an illegal mining case.

He is back in the chief minister's chair for the third time, but with the Supreme Court examining the propriety of his appointment the Lingayat stalwart may not be out of the woods just yet. 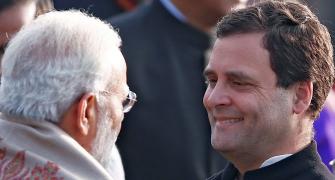 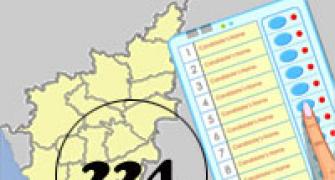 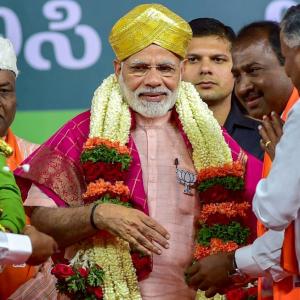 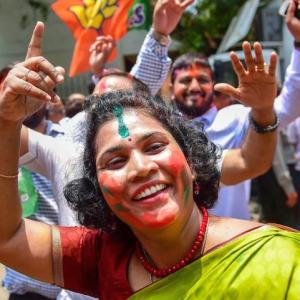