Here's a collection of stories that prove we live in a truly mad, mad world. 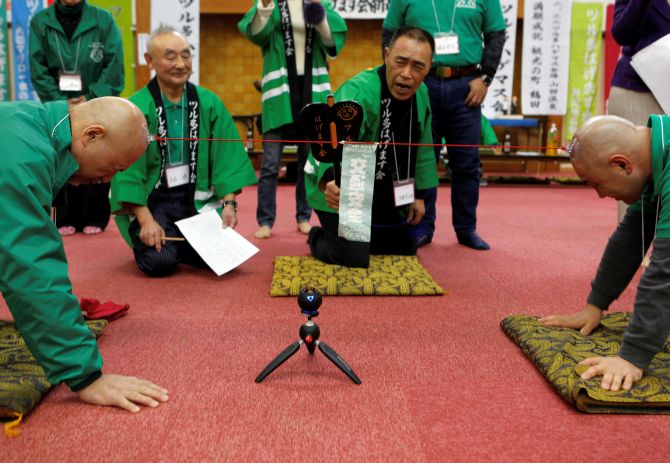 More than 30 bald men gathered at a hot spring facility in Tsuruta City, Japan, on Wednesday to show off their hairless heads and have fun.

Members of the city’s Bald Men Club took turns competing in a unique game of tug-of-war by sticking a suction cup, which is attached to a single red rope, to each of their heads. Both sides then attempt to pull the cup off of their opponent’s head.

“My head still hurts,” Toshiyuki Ogasawara, 43, said with a smile. “I think I need to ice it!”

Masatomo Sasaki, 64, a first-time participant at the tournament, said he used to feel insecure about his baldness but now feels differently.

“I feel proud. Or maybe I should say, I feel good about being a bald man,” Sasaki said, adding that he started losing his hair when he was 40. “And that is thanks to this bald men’s club.”

The club, which has attracted roughly 65 members from all over the country since its founding in 1989, encourages people to “view baldness in a positive manner, to have fun, and to brighten the world with our shiny heads,” according to its website. 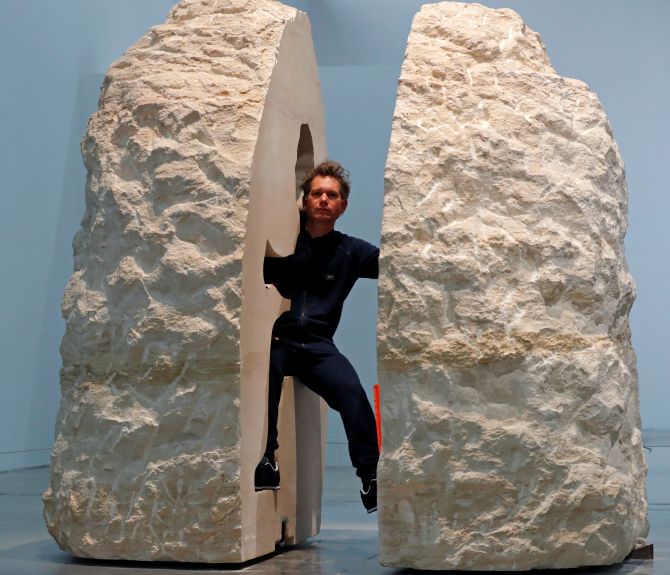 French artist Abraham Poincheval was freed from a block of stone in a Paris museum on Wednesday after spending seven days enclosed in it.

He entombed himself in a body-shaped slot carved in a limestone boulder on Feb 22 at Paris’ Palais de Tokyo contemporary art museum.

Poincheval, 44, ate stewed fruit and purees while breathing through an air vent. He had some personal items such as a log book and an emergency phone line.

“I’m a little dazed, which I imagine is totally normal after one week living in a rock ...which hosted me well. I thank it very much for having been so enthusiastic about welcoming me,” he told reporters minutes after his release.

“Yes, there were very long moments of loss of self, where suddenly you no longer know where you are, but you are there, and that is what was great (about it),” he said.

3) Soon, real-life ‘Hunger Games’ where rape, murder will be allowed 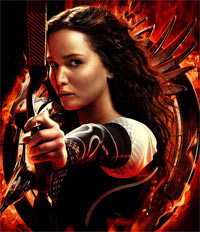 Just when you thought reality shows couldn’t get any weirder and crazier, Russia came up with a real-life Hunger Games, wherein rape and murder will be allowed.

The series ‘Game2: Winter,’ which will be filmed on a remote Siberian island, will see 30 participants, armed with knives, face nine months of hell as they tackle bears, wolves and vicious gnats on the Ob River and its surrounding wilderness.

Organisers of the show said that they will not intervene with the contestants if any should horrific scenes like rape and murder play out, claiming not even the birth of a baby would make them halt the play.

However, they stressed that the participants will be liable to the full force of the Russian law for criminal offences. 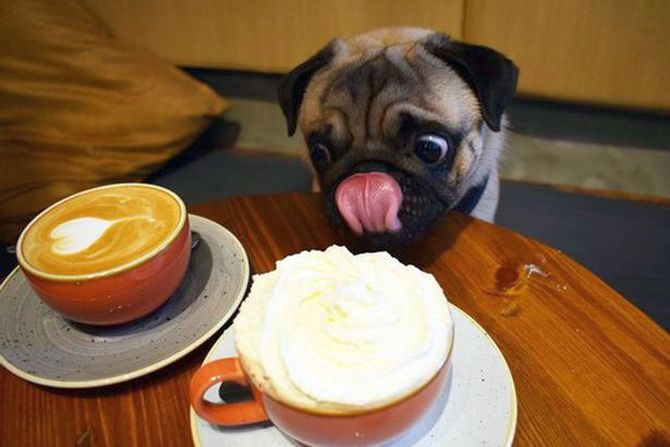 If you thought cat cafes were the cutest thing to hit the street, then we have some good news for you.

Now, there’s an even sweeter way to enjoy your morning coffee -- the Pop Up Pug Cafe.

Pug lovers are invited to bring along their pug pooches to enjoy a some quality time with their pooches, who will even be given their own, free puppacino. 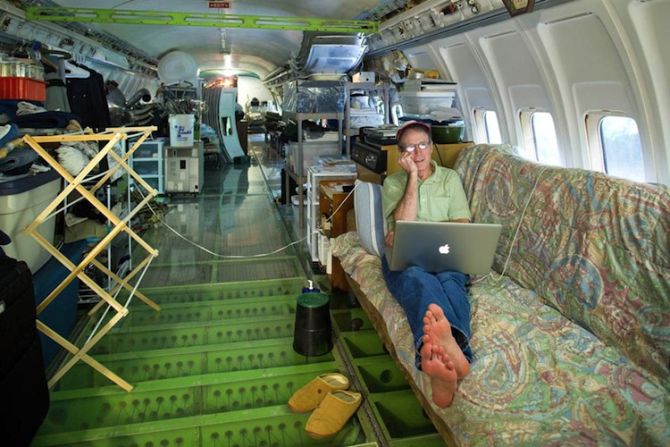 There aren’t too many people they live in a plane, but Bruce Campbell calls a Boeing 727 his home.

Bruce Campbell is an inventive engineer who bought the retired aircraft fuselage and upcycled it into an unusual and innovative home.

The huge 3-engine commercial airliner is propped up on concrete pillars in a suburban wooded area outside of Portland, Oregon, and even has its own driveway.

The aircraft features a makeshift shower, but he is still working to install a working lavatory and to restore some of the plane’s original interior elements, like seating and lights.

Campbell lives in this plane 6 months every year, and spends the other part of the year in Japan, where he is also looking to buy and similarly re-use a retired Boeing 747 fuselage.

6) At US contest, may the smelliest sneaker win 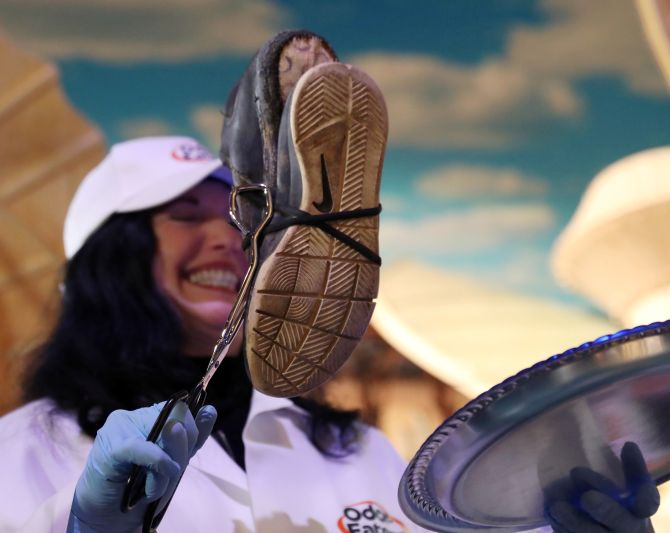 Seven young contestants from around the United States put their best and smelliest shoe forward at the 42nd National Rotten Sneaker Contest in New York City.

Twelve-year-old Connor Slocombe claimed the first place title for having the worst-smelling sneaker after three prior attempts to win the contest in years past.

The four judges of the contest, which was held at Ripley’s Believe It or Not! Times Square, all cringed at the smell of Slocombe’s beat-up shoe.

7) And the winner of the Quidditch British cup is… 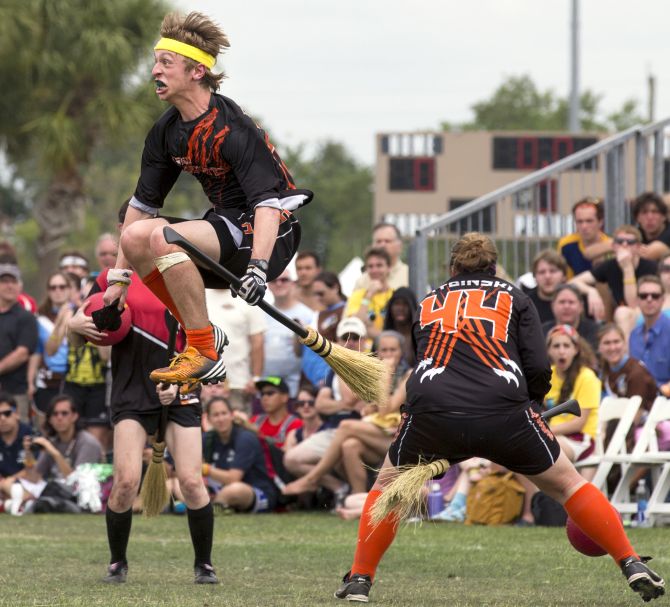 With poles instead of broomsticks between their legs, competitors battle it out in a sport usually reserved for witches and wizards and described by one enthusiastic participant as “organised chaos”.

They are competing for the British Quidditch Cup, in a tournament which draws its inspiration from the magical “Harry Potter” universe created by author JK Rowling but which has had to be modified to allow for the limitations of ordinary mortals, known in her books as “Muggles”.

Instead of flying through the air on magical broomsticks, these competitors run around the pitch holding on tightly to their poles.

Some 32 teams from across Britain took part in the weekend event, organized by QuidditchUK.