Leaders from 70 countries, including United States President Barack Obama and Arab politicians, gathered in Jerusalem on Friday to bid farewell to one of the last leaders of Israel’s founding generation and Nobel Peace Prize winner Shimon Peres as his funeral began amid unprecedented security. As two-time prime minister, minister of defence, foreign affairs, finance and transportation; and, until 2014, as president, Peres did more than anyone to build up Israel’s formidable military might and the country’s nuclear programme.

In what is the largest gathering of foreign dignitaries in the history of Israel, US President Obama, French President Francois Hollande, German President Joachim Gauck and scores of other world leaders are attending the funeral. Obama, who awarded Peres the presidential Medal of Freedom in 2012, is one of the speakers at the ceremony. He arrived in Israel on Friday morning. He wore a black Jewish skullcap as he took his seat at the ceremony.

Palestinian Authority President Mahmoud Abbas was also among attendees. He was seated in the front row.

Abbas, who is on his first visit to Israel since September 2010 when peace talks broke down, shook hands and spoke briefly with Netanyahu upon arrival.

Abbas, who signed the Oslo accords along with Peres, has called him a “brave” partner for peace.

Jordan’s King Abdullah II on Thursday sent a condolence letter to Israeli President Reuven Rivlin in which he highlighted Peres’ efforts to bring peace between Israel and the Palestinians as part of a two-state solution. Egypt and Jordan are the only two Arab countries to have signed peace treaties with Israel.

Israel’s President Reuven Rivlin in his eulogy at the funeral ceremony credited Peres with ensuring the State of Israel “as an indisputable fact”.

“Like you, I was also born into the Zionist Movement in those decisive years between vision and fulfilment. I was fortunate to look up to you as a partner in the building of the State of Israel from its very foundations,” Rivlin said.

“However, with much thanks to you Shimon, for our sons and daughters, for our friends -- and yes for our opponents -- the State of Israel is an indisputable fact,” he said. Applauding Peres as the visionary who shaped Israel’s future right from its foundation, the Israeli President said that he was not just a thinker but a doer.

“You had the rare ability Shimon to conceive what seemed to be the inconceivable, and see it to fruition. Your eyes saw far ahead, while your feet covered great distances on the landscape of Jewish and Zionist history,” Rivlin said.

He “succeeded in moving even the most stubborn of politicians, and to melt away even the hardest of hearts of our opponents,” Rivlin added.

Peres, who was the pioneer of Israel’s nuclear programme and also backed the creation of Jewish settlements in the earlier years only to abandon the idea later as a peacemaker, earned praise for his contributions to Israel’s security. IMAGE: Tsvia, the daughter of former Israeli President Shimon Peres is comforted by her family as she mourns her father's loss. Photograph: Amir Cohen/Reuters

“How deep was your belief in the sacred combination of ethical leadership and military prowess, that Israel must act not just with wisdom, but with justice, faithful at every moment to its values as a Jewish and democratic state, democratic and Jewish,” the president added.

Some 50,000 people paid tributes to the Israeli leader on Thursday at the Knesset (Parliament) where his coffin laid in state throughout the day.

Former US president Bill Clinton was among those who paid their last respects there.

Security forces were put on high alert as the funeral began, with roads closed and thousands of officers deployed. IMAGE: A man takes a photograph of a portrait of former Israeli President Shimon Peres, as he lies in state at the Knesset plaza, the Israeli parliament, in Jerusalem. Photograph: Reuters

Some 2,000 police officers backed by personnel from other agencies have been deployed in Jerusalem for the ceremony with media reports saying that some Arab and Jewish suspects have been put under preventive arrest to prevent any disruption.

Earlier, the casket carrying the departed soul was moved from the Knesset plaza to Mount Herzl.

The former president died on Wednesday morning at the age of 93, two weeks after suffering a massive stroke. 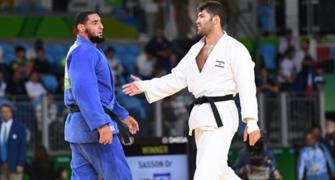 Egyptian booed for not shaking hands with Israeli at Rio Games 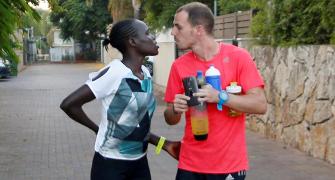 Why this Kenyan runner is going the distance for Israel... 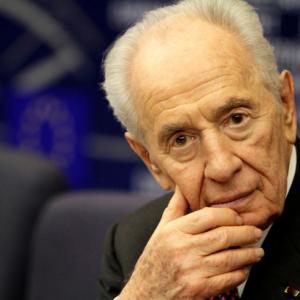 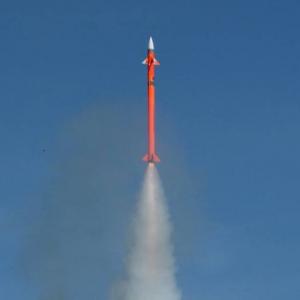