United States President Donald Trump made a last-ditch effort to retain majority in the House of Representatives as he appealed to his supporters across the country to “get out and vote” for his Republican party in the crucial mid-term polls on Tuesday which will decide the balance of powers in the Congress over the next two years. 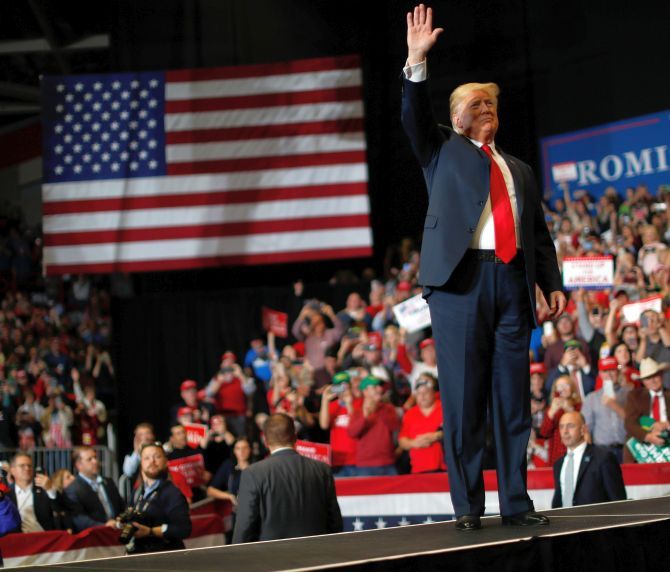 IMAGE: US President Donald Trump waves to supporters at a campaign rally on the eve of the mid-term elections at the Show Me Center in Cape Girardeau, Missouri. Photograph: Carlos Barria/Reuters

Americans would elect 435 members of the House of Representatives and 35 of the 100 Senate seats in the mid-term polls.

The Republican party currently has majority in both the Senate and the House and Trump and his team left no stone unturned to campaign in favour of his Republican party.

During an election-eve rally in Cleveland on Monday, US President Trump claimed that mid-term elections, which used to be “boring”, have now become the “hottest thing” because of him, attributing voter turnout and media attention to his presidency.

Thereafter, he held campaign rallies in Indiana and Missouri wherein he urged his supporters to vote for his party as he wants to retain majority on the US House of Representatives.

According to political pundits, the Democrats have a good chance of winning the House, while the Republicans are likely to retain the Senate.

US House of Representatives -- similar to India’s Lok Sabha -- has 435 seats, of which the Republicans in the current Congress has 235 seats and the Democrats have 193.

Elections for all the members of the House are held every two years. The Republicans are expected to increase their tally in the 100-Senate seat where they already have a very thin majority. 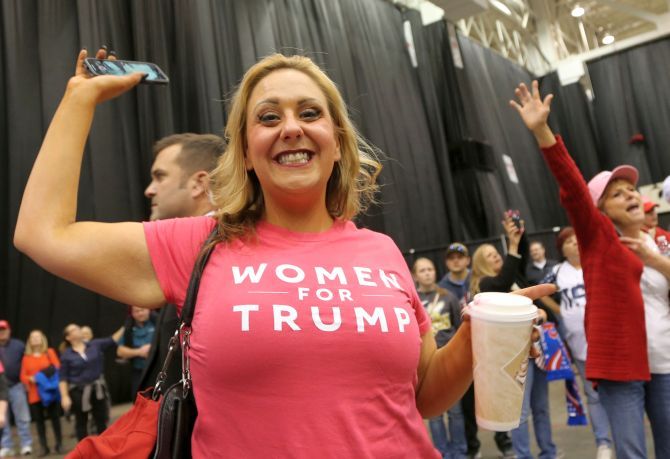 IMAGE: Supporters of US President Donald Trump cheer at his rally in support of Ohio Republican candidates on the eve of the midterm election in Cleveland, Ohio. Photograph: Aaron Josefczyk/Reuters

Before leaving on his campaign trail, Trump exuded confidence that the Republicans is doing good in the elections.

At the same time, Trump pointed that the president’s party normally does not do well in the mid-term.

Talking to reporters at Fort Wayne in Indiana, Trump said he would have to do things differently if Democrats get the majority in the House. 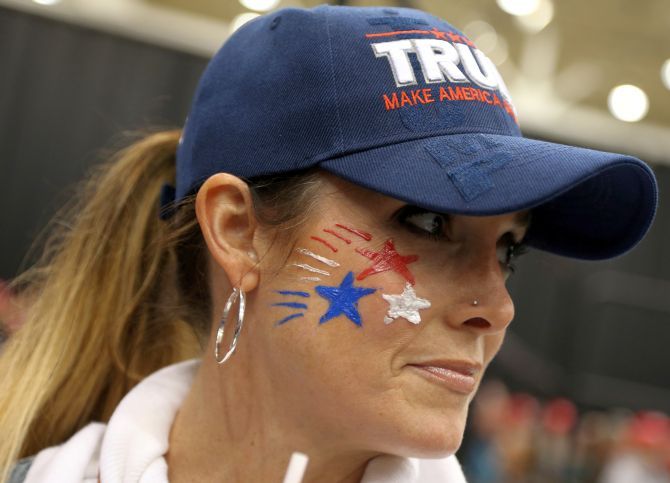 At Fort Wayne, Trump said that if “the radical Democrats take power, they will take a wrecking ball to our economy and to the future of our country.”

“A vote for Republicans is a vote to continue our extraordinary prosperity,” he said, adding that a vote for Democrats is a vote to bring this economic boom crashing down very rapidly.

“The Democrat agenda will deliver a socialist nightmare. It’s what it is. The Republican agenda is delivering the American dream,” he said.

On the eve of the mid-term elections, Democrats continue to hold a double-digit lead over Republicans in a generic congressional ballot among likely voters, according to a new CNN Poll conducted by SSRS.

The party’s 55 per cent to 42 per cent advantage in the new poll mirrors their lead in early October and is about the same as the 10-point edge they held just after Labor Day.