Prime Minister Narendra Modi on Saturday met Bollywood actors and filmmakers, including Shah Rukh Khan and Aamir Khan, and released a cultural video with the theme 'Change Within' to mark the 150th birth anniversary of Mahatma Gandhi. 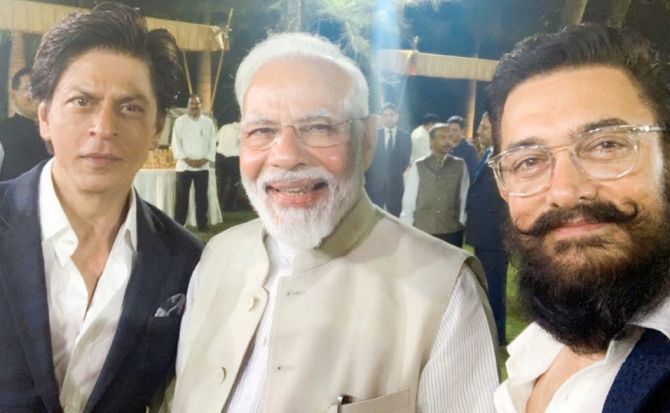 To celebrate 150 years of Gandhi, filmmaker Rajkumar Hirani brought eight leading actors together for the special tribute, which was launched by the PM at his official residence.

"The film fraternity comes together to pay tributes to Mahatma Gandhi! #ChangeWithin is an excellent effort, which will add momentum towards ensuring Gandhi Ji's message reverberates far and wide. It will also inspire citizens to take up causes dear to Bapu," Modi tweeted.

The PM tweeted pictures with the fraternity, saying the "interaction with leading film personalities and cultural icons was fruitful". 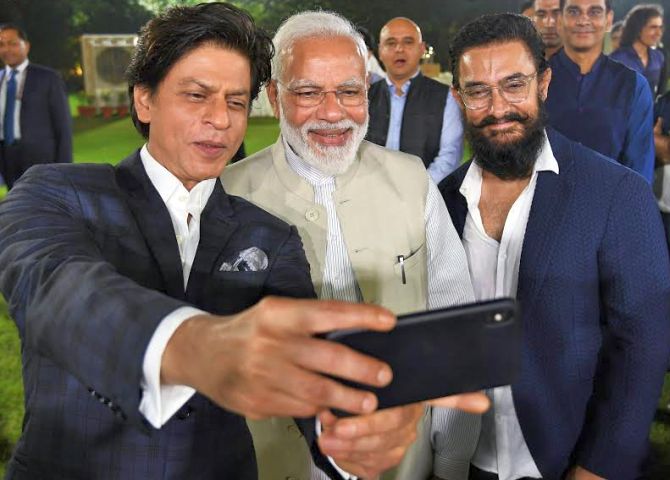 IMAGE: The two Bollywood giants take a selfie with the PM. After the interaction with the prime minister, Shah Rukh thanked him for bringing the industry together for such a cause. Photograph: @PMOIndia/Twitter

"Spreading the thoughts of Mahatma Gandhi through cinema, ensuring more youngsters are well-acquainted with the ideals of Gandhi Ji... We exchanged thoughts on a wide range of subjects," he said.

"Our film and entertainment industry is diverse and vibrant. Its impact internationally is also immense. Our films, music and dance have become very good ways of connecting people as well as societies," the prime minister added. IMAGE: Actress Sonam Kapoor Ahuja was also at the event where the 100-second video based on Gandhi's life, teachings and values was released. Photograph: @PMOIndia/Twitter

After the interaction with the prime minister, Shah Rukh thanked him for bringing the industry together for such a cause.

"I feel we need to re-introduce Gandhi ji to India and the world. The film industry can get self-obsessed and it is important we create work that sends out messages. It should not always be about business but in an engaging and entertaining manner, everyone should be involved," he said.

Aamir said, "It was a really wonderful interaction we had with the prime minister today. He was very inspiring, very warm and very deep in what he had to say." IMAGE: TV and film producer Ekta Kapoor posted this image with Kangana Ranaut, Jacqueline Fernandes and others with the caption, "Women in film with the honourable visionary PM." Photograph: @ektaravikapoor/Twitter

Kangana Ranaut hailed the initiatives taken by PM Modi. "Modiji is the first prime minister who is so inclusive of art and artistes and the film industry. Nobody has given respect and recognised the soft power of art and artistes in the country before," she said.

"From the bottom of my heart and on behalf of the entire film industry, I thank our prime minister and the things that he has said about propagating Gandhi philosophy and his way of live and values we will make sure we get something concrete from that," Ranaut added.

Producer Boney Kapoor said, "This government has always been sympathetic to the film industry right from Vajpayee (Atal Bihari) saab's time when we were recognised as an industry. Since Mr Modi came in, he has made it a point to ensure every glitch is solved instantly. The problems are taken care and I am sure we are in good hands as long as he is there."

Jacqueline said she was honoured to be in the presence of the prime minister. "He is so approachable and always willing to raise the film fraternity and lend a helping hand," she added. IMAGE: Filmmaker Rajkumar Hirani brought eight leading actors together for the special tribute, which was launched by the PM at his official residence. Photograph: @narendramodi/Twitter

TV and film producer Ekta Kapoor said this was the first time that she felt somebody understood the industry better than its insiders and was motivating them to do something for the society.

Filmmaker Imtiaz Ali said the session was very informal and the film industry understands the informal language the best. 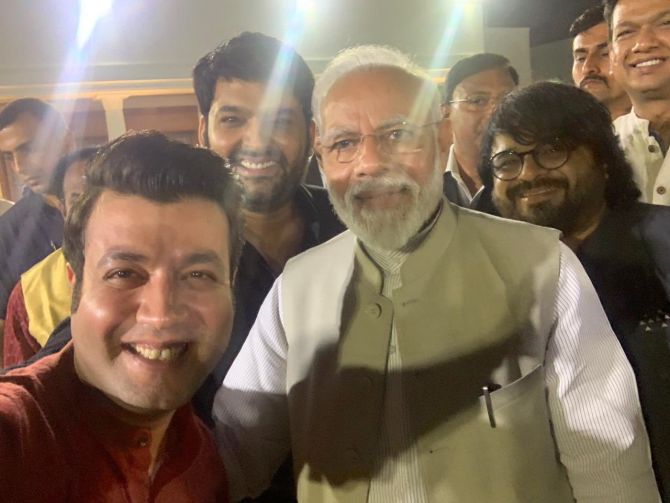 "The idea to make films on Gandhiji is a good thing and it will help reintroduce ourselves to Gandhiji's philosophy. It is a good time to go back to Gandhi and understand the power that made the most powerful imperialist move away from this nation without the use of violence and that will bring about the change within and that can be carried forward into the films that we will end up making on this topic," he said.

"When we make films, there are moments we wonder why are we doing this? Filmmakers are lost. Today, we got a reason a direction and all the creative people here are extremely upbeat after the session. I feel we will see results in a year's time," Anurag Basu said.