A wave of grief swept across the country as the mortal remains of the soldiers who laid down their lives fighting the Chinese Army in Galwan Valley in Ladakh were taken to their native places on Wednesday. IMAGE: Army personnel and political leaders pay tributes to Hawaldar Sunil Kumar, who lost his life in a violent clash with Chinese troops at Galwan Valley in Ladakh, during a wreath-laying ceremony at Jaiprakash Narayan Airport in Patna on Wednesday. Photograph: ANI Photo

Anti-China protests were held in several parts of the country, including the national capital, though restrictions were in place on assembly of people due to the coronavirus lockdown.

For many of the bereaved families the agonising wait started on Tuesday evening when they were informed by senior Army officials about the sacrifice of the 20 soldiers in the clashes with the Chinese Army along the Line of Actual Control a day earlier.

In heart-wrenching scenes reminiscent of the aftermath of the 2019 Pulwama terror attack in which 40 Central Reserve Police Force personnel were killed, coffins of soldiers arrived in several states for the last rites with full military honours. 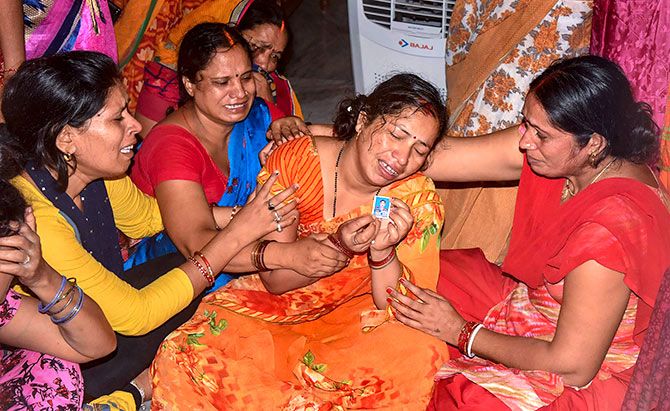 Even as they struggled to come to terms with the shocking news and grieved over the lives cut short, family members of the soldiers said they were proud of their sacrifice.

The body of Colonel B Santosh Babu, which was brought to Hyderabad by a special aircraft, was taken to his native Suryapet town by an ambulance as people holding the tricolour showered flowers on it.

Telangana Governor Tamilisai Soundararajan and state IT and Industries Minister K T Rama Rao were among those who paid their last respects. 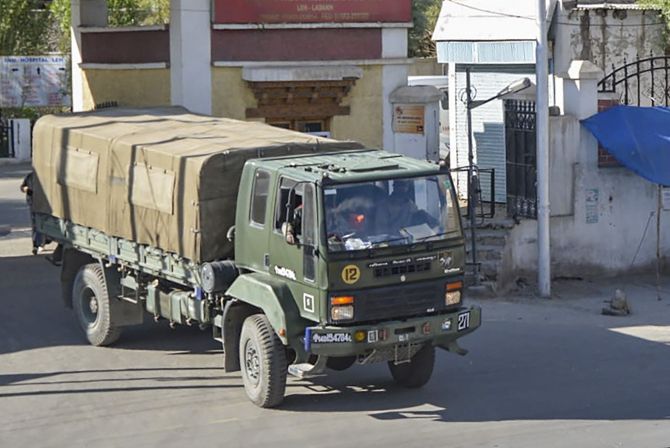 At many places across Telangana, people and members of different political parties and other organisations paid floral tributes to the army officer.

Holding the tricolour and banners that read 'We salute the soldiers', they raised 'Bharat Mata ki Jai' and 'Vande Mataram' slogans.

The 21-year-old was recruited to the Punjab Regiment in 2018 and was a third-generation soldier.

"We feel proud that he has laid down his life for the motherland," said Karunakar Pradhan, the father of 28-year-old Chandrakanta Pradhan from Odisha's Kandhamal district. 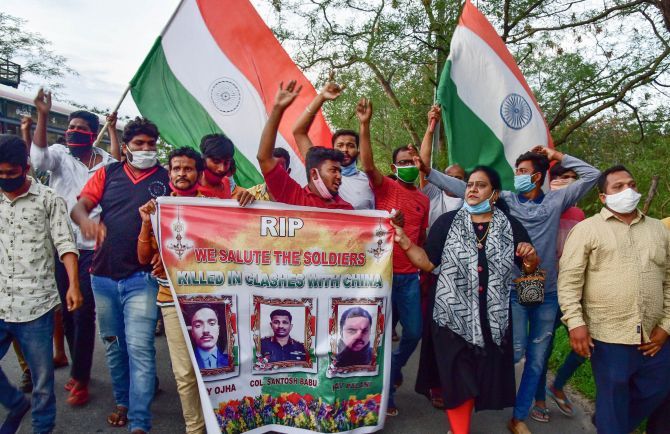 IMAGE: Citizens wait for the arrival of the mortal remains of Colonel Santosh Babu at Hakimpet Air Force station in Hyderabad, on Wednesday. Photograph: PTI Photo

Chandrakanta belonged to a tribal community and hailed from Biarpanga village.

"My son was highly sincere towards his duty. He was courageous, simple and hard working. We got the information about his martyrdom on Tuesday night. We are waiting for his body," said Karunakar Pradhan in a choked voice.

A marginal farmer, Pradhan said his unmarried son was the breadwinner. The soldier has three siblings.

Chandrakanta joined the Army in 2014 and had last visited home around two months ago. He was popular in the village, the soldier's father said.

Pradhan said his son had called a few days ago and narrated the tense situation that prevailed at the place where they were deployed.

Deepak Kumar from Madhya Pradesh told his grandmother Phool Kumari on phone a few days ago that he will come home after the coronavirus lockdown ends. 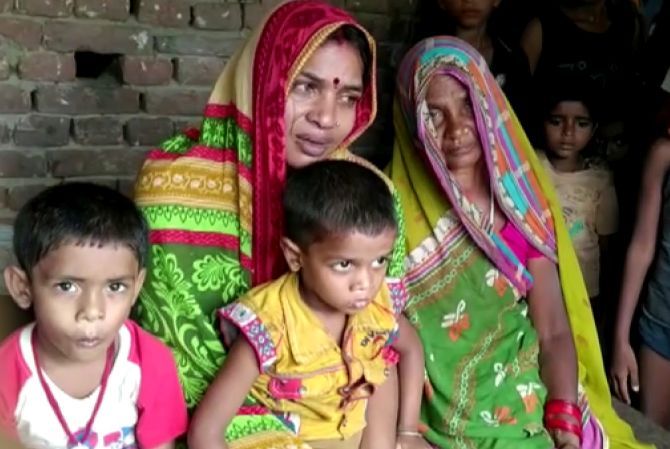 IMAGE: Family members of Sepoy Kundan at their residence in Patna on Wednesday. Photograph: ANI Photo

"I spoke to him just a few days back and at that time he told me that after the lockdown ends, he will take leave and come home.

"But after the lockdown ended, we got the news of his martyrdom," Singh's 85-year-old inconsolable grandmother said.

Deepak Singh's mother passed away several years ago and since then she has been looking after him.

"He was a very loving person and used to respect everyone in the house. Everybody used to like him a lot," she said.

Kundan Kumar Ojha from Jharkhand was blessed with a daughter just 17 days ago. He had promised his mother over the phone that he would be home as soon as he got leave from duty.

On Wednesday, his parents were too overcome with grief to even speak. Naib Subedar Nanduram Soren, 43 from Rairangpur area of Mayurbhanj was also among the slain soldiers from Odisha.

After completing Class 12 from Rairangpur College, Soren joined the Army in 1997 as he was very keen to serve the motherland. He was sincere in his duty and worked in a dedicated manner, his elder brother Doman Majhi said.

Soren has left behind his wife and three school-going daughters, he said.

"We all feel shattered after receiving the message about his martyrdom. Nanduram was an asset for the family as well as the village. He was loved by all for his friendly nature," Majhi said.

The entire village is proud of his supreme sacrifice, M N Mahato, a villager, said. 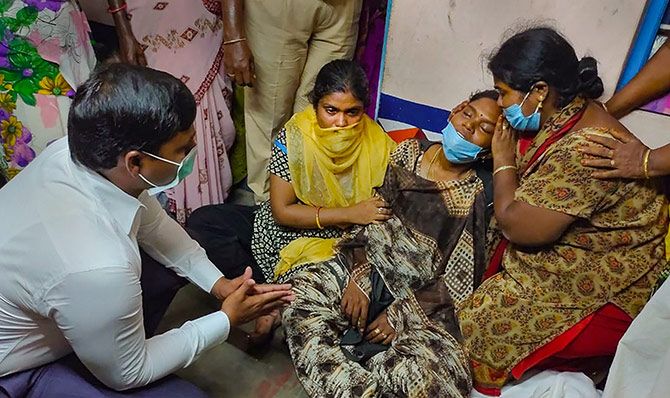 In West Bengal, the family of Rajesh Orang, who joined the Army in 2015, said they were planning his marriage.

"My son served the country and gave his life for it," was all his grieving father Subhas could say on Wednesday morning at his modest home.

Subhas said that he was informed by the Army authorities on Tuesday evening about the death of Rajesh, who was in his early 20s.

"From his childhood, my brother wanted to serve the country and was happy to be in the Army," his youngest sister Shakuntala said.

"He came home on leave a few months back and talks were on for his marriage," she said.

Sepoy Gurbinder Singh, 22, who had joined the Army just two years ago, was among four soldiers from Punjab who were martyred in Ladakh. "We received a call at 6:30 am today that Gurbinder Singh has attained martyrdom," said Gurpreet Singh, elder brother Gurbinder. The body is expected to reach the village on Thursday.

A pall of gloom descended on the village Tolawal in Sunam subdivision in Sangrur and mourners started assembling at Gurbinder's house.

He talked to his family around 15 days back.

Gurbinder, who belonged to 3 Punjab Regiment, got engaged last year when he came back home on a brief leave, said Jagseer Singh, Gurbinder's maternal uncle.

"We had his plans for his marriage this year when he returns home on leave," Jagseer told PTI.

Sepoy Ganesh Ram Kunjam, 27, who hailed from Gidhali village in Kanker district of Chhattisgarh, had finalised his marriage during his last home visit and planned to solemnise it next year, his relatives said.

After completing his education till Class 12, Ganesh Kunjam had joined the Army in 2011 as he wanted to serve the nation, his paternal uncle Tiharu Ram Kunjam said. 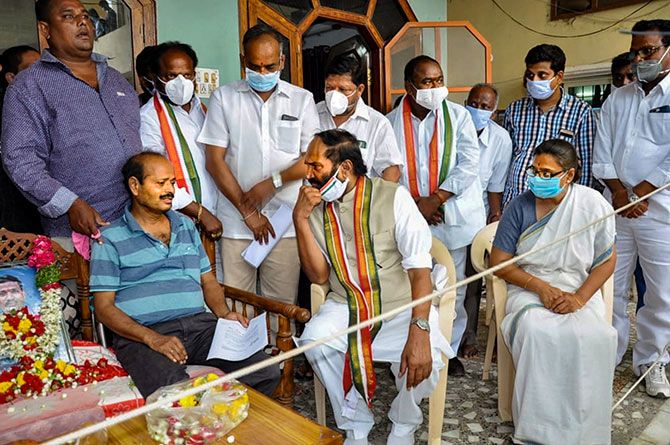 Ganesh had come home on leave in February-March this year during which his marriage was fixed with a girl of a village in Kanker.

"Just last month, I got a call from him during which he said hewas being posted to some other place... I had never thought that the phone call made in May would be our last conversation. We all are in shock," Tiharu Kunjam said.

"I am proud of my nephew's martyrdom but sacrifices of our soldiers should not go in vain," he said.

"He is a great martyr and I am proud of him. He last talked to us on Monday but no one knew that was his last call," said Jagir.

Satnam's younger brother Sukhchain Singh, who is also serving in the Army, said his brother sacrificed his life for the nation and he was proud of him. Naib Subedar Mandeep Singh and Sepoy Gurtej Singh are the other two soldiers from Punjab.

Prime Minister Narendra Modi led the nation in paying tributes to the soldiers.

India wants peace but is capable of giving befitting reply if instigated, he said and asserted that the sacrifice of the army men will not go in vain.

The PM, who was speaking on day two of the virtual conference with chief ministers on the coronavirus crisis, also observed a few minutes of silence along with the other leaders in memory of the bravehearts.

Odisha Chief Minister Naveen Patnaik on Wednesday announced Rs 25 lakh each as ex-gratia to the families of two slain soldiers from the state. 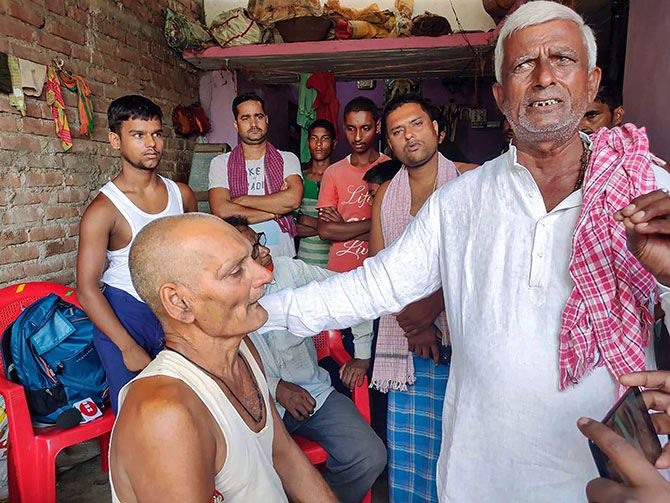 Punjab Chief Minister Amarinder Singh declared an ex-gratia compensation of up to 12 lakh, along with a government job to a next of kin of the deceased.

West Bengal Chief Minister Mamata Banerjee announced a compensation of Rs 5 lakh and a government job for kin of each of the two soldiers from the state.

Tamil Nadu Chief Minister K Palaniswami had announced a solatium of Rs 20 lakh to the family of the slain soldier, K Pazhani of Kadukkalur village in Ramanathapuram district.

Angry people burnt tyres and blocked the Jammu-Poonch Highway for over half-an-hour. IMAGE: Sister of soldier Rajesh Orang mourns after receiving the news of his death at Belgharia village in Birbhum district, on Wednesday. Photograph: PTI Photo

Protesters also took to the streets in several cities like Ahmedabad, Vadodara and Surat in Gujarat, and in Uttar Pradesh, shouting anti-China slogans and demanding a boycott of its goods.

A group of ex-armymen gathered near the Chinese embassy in Delhi to protest and were later dispersed.

The Army initially said on Tuesday that an officer and two soldiers were killed. But in a late evening statement it revised the figure to 20 saying 17 others who 'were critically injured in the line of duty and exposed to sub-zero temperatures at the standoff location succumbed to their injuries'.

Government sources said the Chinese side too suffered 'proportionate casualties' but chose not to speculate on the number.

It is the biggest confrontation between the two militaries after their 1967 clashes in Nathu La when India lost around 80 soldiers while over 300 Chinese army personnel were killed in the confrontation. 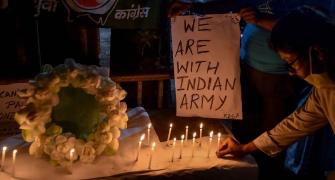 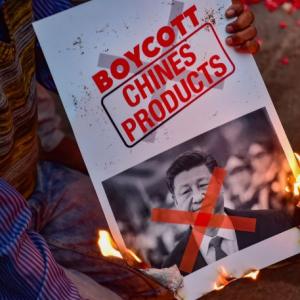