Many Kashmiris have been left with no option but to flag down the odd private vehicle passing by in the Valley. 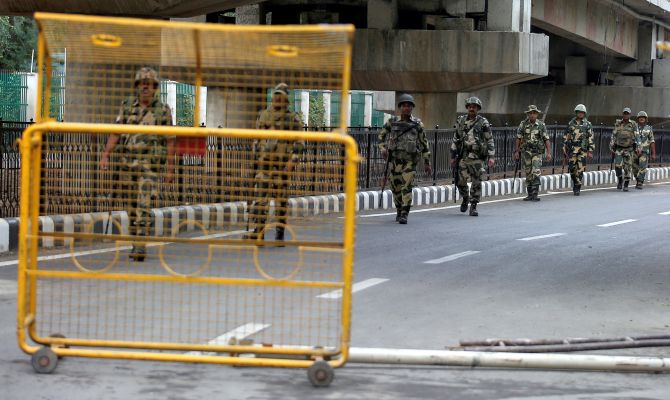 Kashmir's uncertain, restive situation has pushed public transport off the roads, leaving many people with no option but to flag down the odd private vehicle passing through the desolate highways of the Valley.

A few people, some in twos and threes and some alone, can be seen walking or standing by the side hoping to get a ride into the nearest town or village -- to meet their children, parents or maybe just get back home.

The Valley has been under a virtual communications blackout since the night before with few workable phones, mobile or landline, and virtually no internet connections. Prohibitory orders are in place with authorities saying there is no curfew.

And the desperation of people, who said they are trapped and staying indoors is not always possible, is rising by the hour.

Among those seen frantically trying to get a car to stop at Narbal Road on the outskirts of Srinagar was Nighat Nasir.

"I have to reach Baramulla (about 60 km away) and be there with my children," she said.

The couple started walking from their Srinagar home till they reached Narbal Road, a distance of 17 kilometres. Their efforts paid off and they finally managed to hop on to an ambulance that promised to take them halfway to Pattan in north Kashmir. 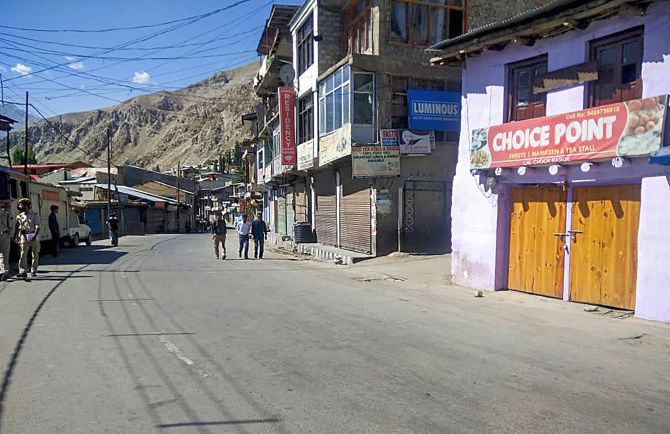 IMAGE: A view of a deserted street during shutdown in Kargil. Photograph: PTI Photo

Mohammed Ramzan, now admitted in a hospital in Bemina on the outskirts of Srinagar, didn't stop to wait for a lift.

The resident of Srinagar's Lal Bazar locality got a distress call from his daughter on Sunday night in Budgam in central Kashmir and left his home early after daybreak on Monday morning. Budgam is about 35 km from Srinagar.

With no buses or taxis, he walked for 12 km before collapsing in sheer exhaustion.

"Ramzan collapsed and was picked by a security vehicle and brought to the hospital," said Dr Shafkat Bhat at the Bemina hospital.

The stories are many. 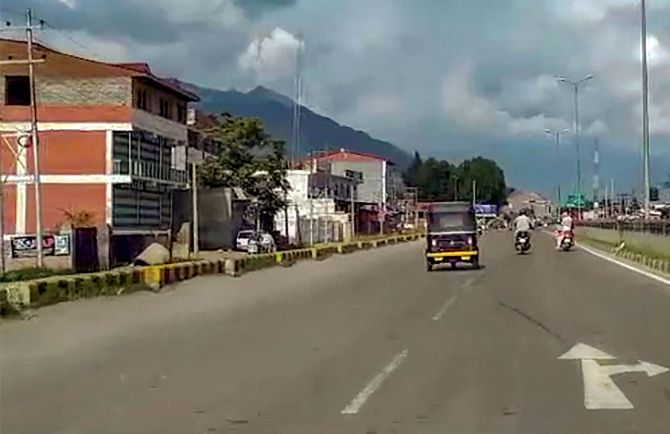 Mohammed Shahim said he took a lift from three different people to cover the 65 km distance from Khrew in south Kashmir to Srinagar.
"Is there a curfew? Why can't we go to any place? We are not creating any disturbance then why are we being troubled," he asked a paramilitary trooper guarding a road leading to Batmaloo in the city.

"I managed to reach from Khrew after taking a lift from three different people. I covered 65 kilometres and now they are not allowing me to go inside my locality," Shahim, who works in private factory, said.

He was allowed in after a senior officer intervened.

"These are difficult times, kindly bear with us," the officer told Shahim and requested people not to take pictures from their mobiles.

Riyaz Rather, who stays in downtown Srinagar but runs a medical shop in the Civil Lines area, said covering the 10 km distance is an everyday challenge.

"Someone or the other gives a lift and this is how we cover the distance these days. The government is telling us that there is no curfew but police did not allow me to take out my vehicle," Rather said

He has been commuting all these days from his home on foot. "Once I cross downtown, someone or else gives me a lift and that's how I reach," he said.