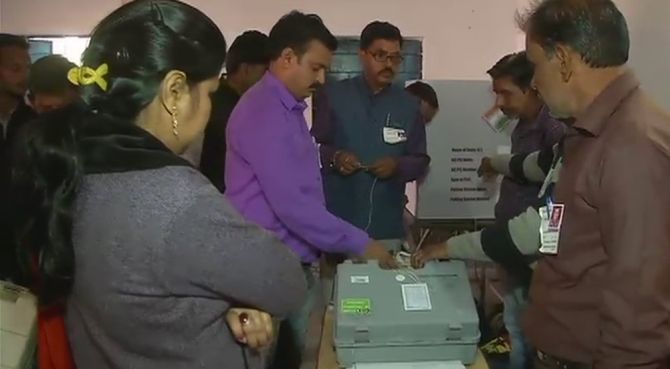 An estimated 70-77 per cent polling was on Saturday recorded in bypolls to two assembly seats in Madhya Pradesh, where minor clashes were reported, and one assembly constituency in Odisha, according to officials.

All the three seats were earlier with the Congress. The outcome of the by-elections would be watched keenly ahead of assembly elections in Bharatiya Janata Party-ruled Madhya Pradesh due later this year.

Biju Janata Dal-ruled Odisha will go to polls next year.

An Election Commission official said minor clashes between political workers were reported from some areas.

While Ashoknagar District Collector K V S Choudary said 77.05 per cent polling was recorded in Mungaoli, Shivpuri Collector Tarun Rathi told PTI that the turn-out in Kolaras was 70.4 per cent.

Overall, 13 candidates are in the fray in Mungaoli and 22 in Kolaras. 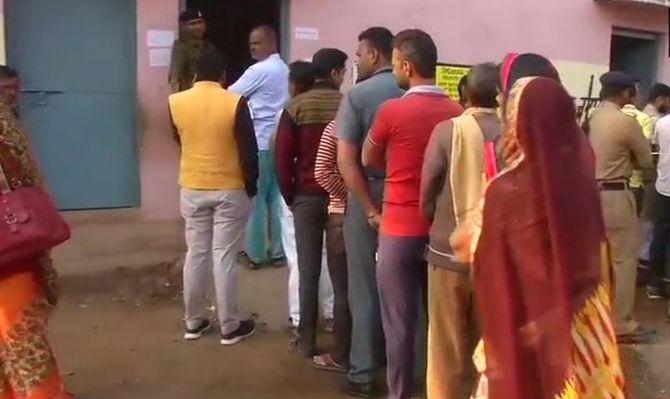 The bypolls were necessitated due to the death of Congress's Mungaoli MLA Mahendra Singh Kalukheda and its Kolaras MLA Ram Singh Yadav.

Both seats are in the Guna Lok Sabha constituency, represented by Jyotiraditya Scindia. Kolaras and Mungaoli have 2,44,457 and 1,91,009 eligible voters respectively.

An estimated 72 per cent voters exercised their franchise in Bijepur Assembly seat bypoll in Odisha that passed off peacefully amid tight security, according to state Chief Electoral Officer (CEO) Surendra Kumar.

No untoward incident was reported in the five Naxal-affected polling stations in the Assembly segment, located in Bargarh district.

It was a smooth affair barring brief interruptions in some booths in the early stage of voting, due to technical snags in Voter Verifiable Paper Audit Trail (VVPAT) machines, the official told reporters.

Kumar said that the presiding officer of booth No.193 was placed under suspension with immediate effect, after he was found trying to influence voters in favour of a particular candidate.

Arrangements have been made to keep the Electronic Voting Machines (EVMs) under tight security after polling was held from 8 am to 5 pm, he said.

Counting of votes for all the three seats would be undertaken on February 28. It appeared to be a triangular contest among nominees of the ruling BJD, the Congress and the BJP in Odisha.

The by-poll was necessitated due to the death of Congress MLA Subal Sahu in August last year.

Subal Sabu's wife Rita Sahu has been fielded this time by the BJD, while Ashok Panigrahi is nominated by the BJP, and Pranay Sahu by the Congress.

Elaborate security arrangements were made for the by-election, especially in the wake of pre-poll violence in and around the area, officials said. Around 2.21 lakh voters were eligible to exercise their franchise in 281 polling booths set up for the by-poll, as against 270 booths during the Assembly polls in 2014, they said.