The second phase of polling on 94 seats in the Bihar assembly elections passed off peacefully on Tuesday with a voter turnout of over 54.64 per cent, marginally lower than the 2015 figure, as COVID-19 failed to dampen the democratic spirit of citizens. 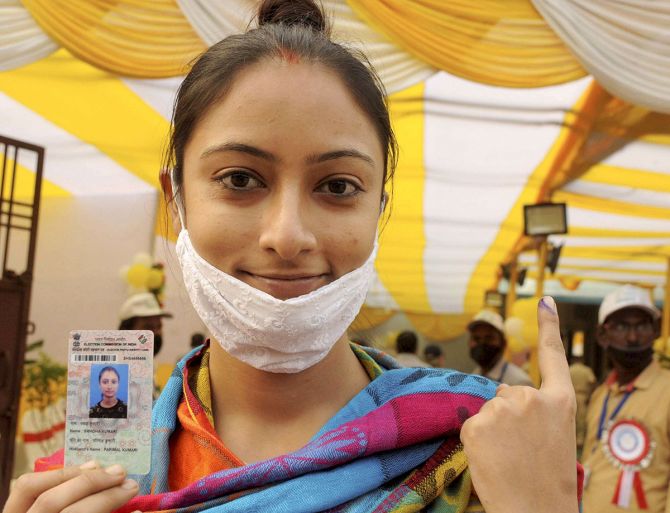 IMAGE: A woman shows an ID and her finger marked with indelible ink after casting vote during the second phase of Bihar assembly polls, amid the ongoing coronavirus pandemic, in Patna . Photograph: PTI Photo

The second round of the voting was held in the 17 districts amid tight security and strict coronavirus guidelines in place.

The voting percentage at 10.30 pm was 54.64, according to the Election Commissions Voter Turnout Apps provisionally data.

The polling percentage is likely to go up as the poll panel updates the figure with more inputs from these constituencies.

The voting percentage in the respective seats in the 2015 polls was 56.17, according to Election Commission figures. 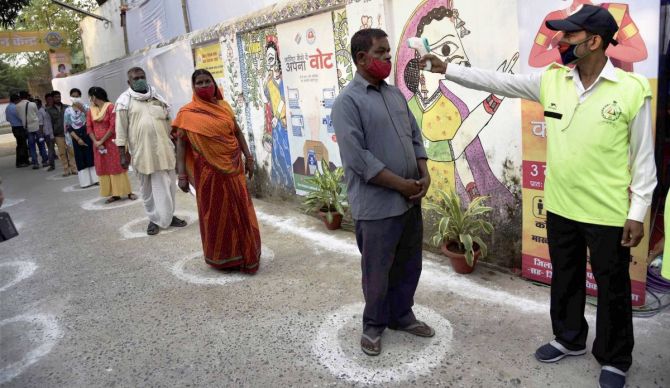 IMAGE: Voters undergo thermal screening at a polling station before casting his vote during the second phase of Bihar assembly elections, amid the ongoing coronavirus pandemic, in Patna. Photograph: PTI Photo

Among districts, Muzaffarpur (59.98) recorded the maximum voting percentage, followed by West Champaran (59.69), while state capital Patna recorded the minimum turnout at 48.24 per cent.

The maximum voting percentage among constituencies was recorded in West Champaran's Chanpatia (63.62), followed by Samastipur's Ujiarpur (62.2).

According to Election Commission data, the three constituencies with the lowest voting percentage -- Kumhrar (36.4), Bankipur (35.9), Digha (34.5) -- are all in Patna.

However, the state capitals another urban constituency, Patna Sahib, recorded a voting percentage of 50.6. 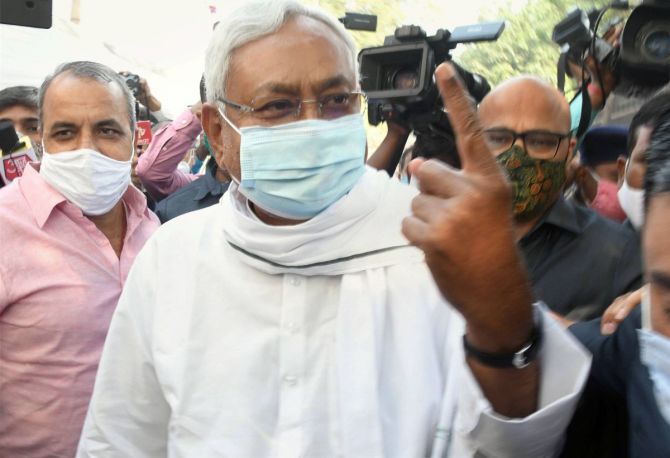 According to the Election Commission, more than 2.85 crore voters were eligible to decide the electoral fate of 1,463 candidates -- 1316 male, 146 female and one transgender.

Also in the fray was Chandrika Roy (JD-U), the father of Tej Pratap Yadav's estranged wife Aishwarya Rai, from Parsa. 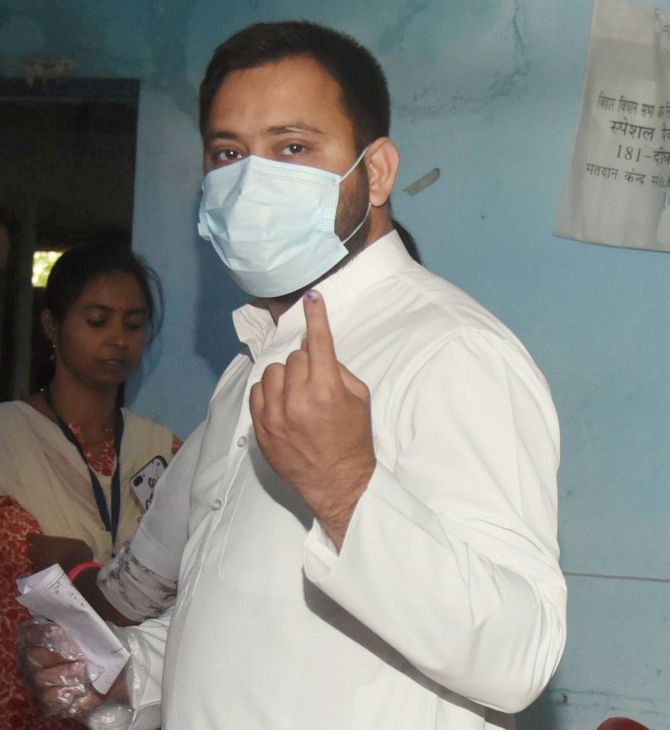 The poll panel said that out of 18,223 buildings that housed polling booths, 986 were in naxal-affected areas and that 62 people were taken in preventive custody.

The poll panel had set up 634 model polling centres.

Polling began at 7 am, but the time for its conclusion was extended by one hour till 6 pm to facilitate COVID-19 patients and those with symptoms of the disease to exercise their franchise during the final hour. 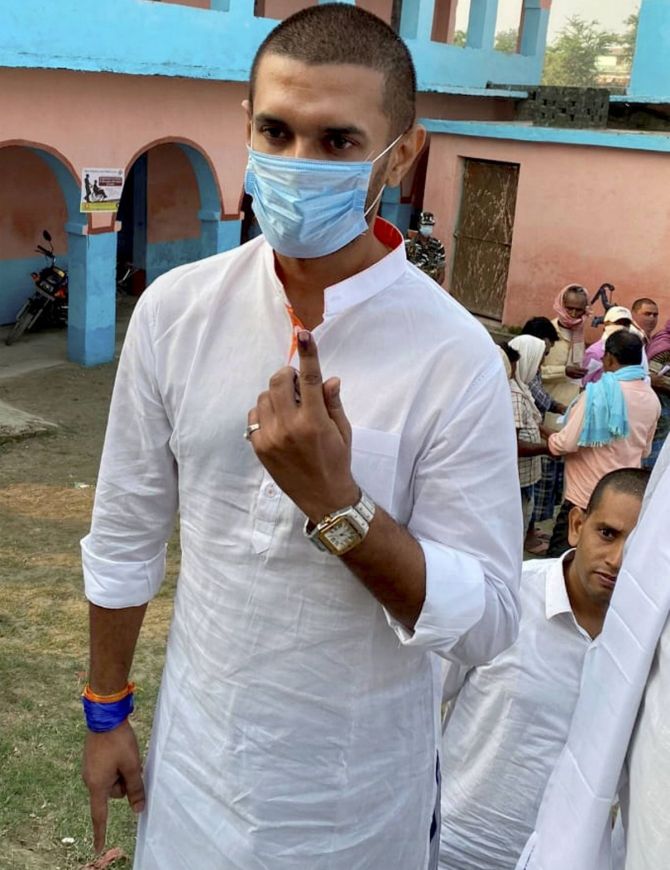 In the last hour of voting, some people were seen casting their votes in PPE kits at a polling centre in Begusarai.

Voting ended at 4 pm in eight seats -- Gaura Bauram and Kusheshwar Asthan in Darbhanga district; Minapur, Paroo and Sahebganj in Muzaffarpur; Alauli and Beldour in Khagaria; and Raghopur in Vaishali either because of their naxal history or reverine settings.

Among the major parties, the RJD had fielded its candidates on 56 of the 94 seats, while its ally Congress contested 24. 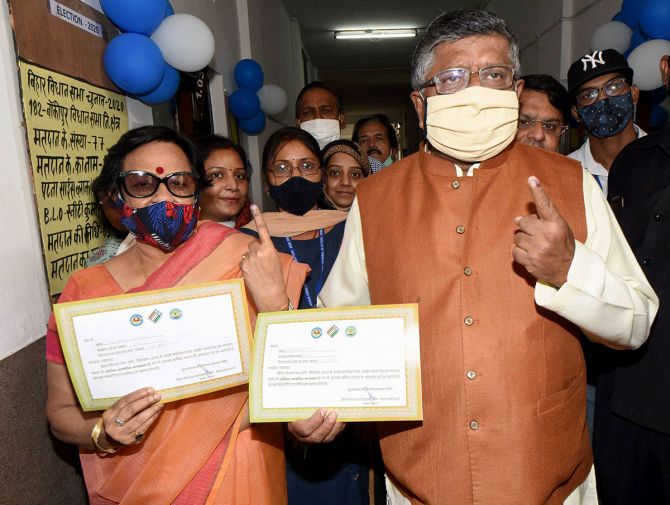 BJP candidates were in the fray on 46 of the seats, while its ally JD-U had fielded 43.

The LJP was contesting 52 seats, including the two it had won in 2015 contesting as an NDA constituent.

The party had fielded one transgender candidate too in this phase.

Maharajganj constituency had the maximum 27 candidates in this phase, while the minimum four were from Darauli constituency (SC). 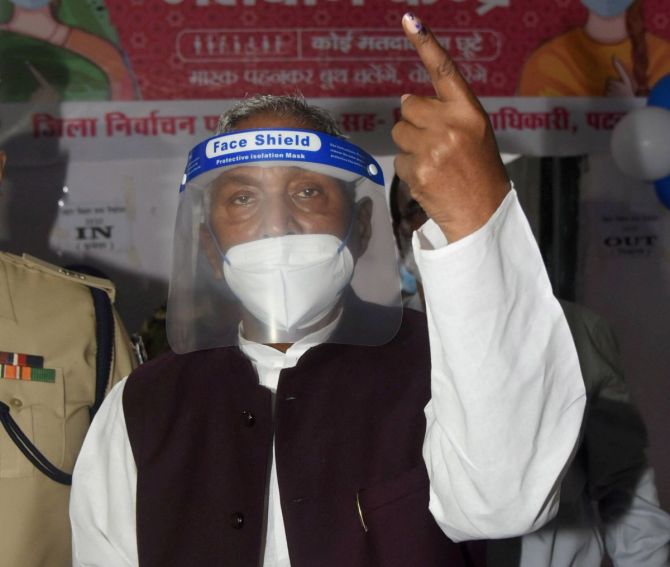 Meanwhile, 34-year-old Sashastra Seema Bal jawan Shailesh Kumar Singh was killed after he was run over by an unidentified vehicle while on his way to attend election duty in East Champaran district, police said.

Also, 55-year-old BSF Sub Inspector K R Bhai, who was on duty at a polling booth in the Lalganj assembly seat, died of heart attack, police and hospital sources said.

In Khagaria district, a 106 year-old woman cast her vote at her booth in Rampur village under Parbatta constituency.