Elections to six municipal corporations in Gujarat are being held on Sunday amid tight security and adherence to COVID-19 norms. 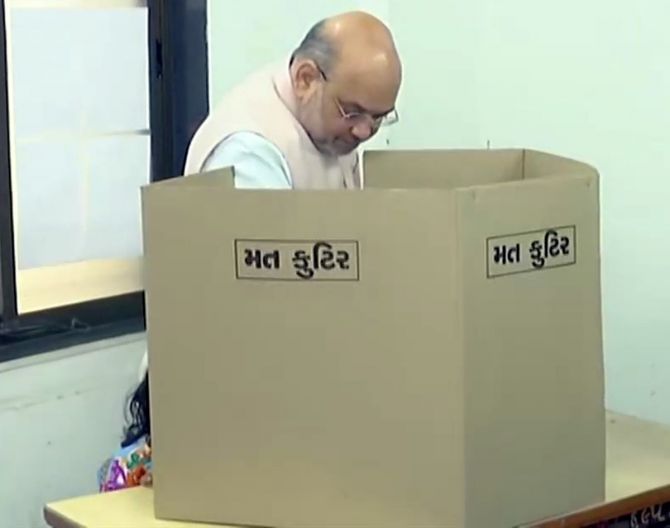 People started queuing up outside polling booths soon after the voting began at 7 am across various wards in the six municipal corporations in Ahmedabad, Vadodara, Surat, Rajkot, Jamnagar and Bhavnagar.

The voting will continue till 5 pm.

In the morning, elderly voters were also seen at various booths, where precautions have been taken to follow COVID-19 prevention norms, including use of masks and sanitisers and maintaining social distance.

Local MPs, MLAs and leaders of different political parties also arrived at various polling booths in the morning to vote.

Among those who cast their votes in the initial hours were Bharatiya Janata Party's MP Kirit Solanki and party MLA Rakesh Shah. Solanki voted at a booth in Ranip area of Ahmedabad along with his wife and family members, while Shah cast his vote at a booth in Ellisbridge area of the city.

Chief Minister Vijay Rupani, who tested positive for coronavirus during the campaign some days back, is likely to vote in his hometown Rajkot. 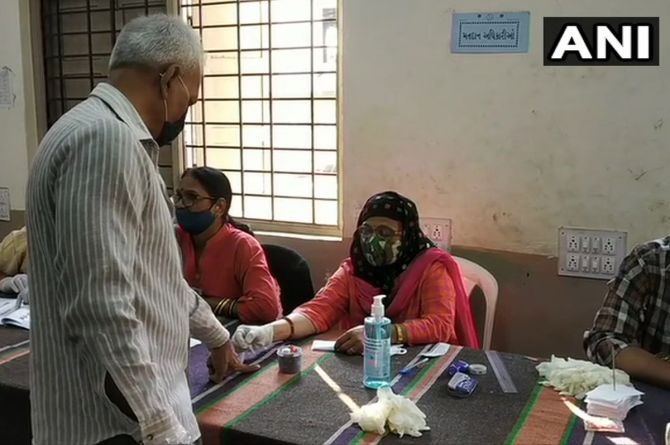 The main contest is between the BJP, which has ruled the six corporations for last several terms, and the main opposition Congress.

The Aam Aadmi Party has claimed it would be an effective alternative to the BJP and Congress, while Asaduddin Owaisi's All India Majlis-e-Ittehadul Muslimeen is making its debut in the local bodies polls, having fielded 21 candidates in six wards of Ahmedabad.

Around 32,000 policemen have been deployed for voting in 575 seats, with each ward having four corporators, officials said.

A total of 2,276 candidates are contesting the polls in the six municipal corporations. Besides, nine candidates are also in the fray for by-elections to two seats in the Junagadh Municipal Corporation. 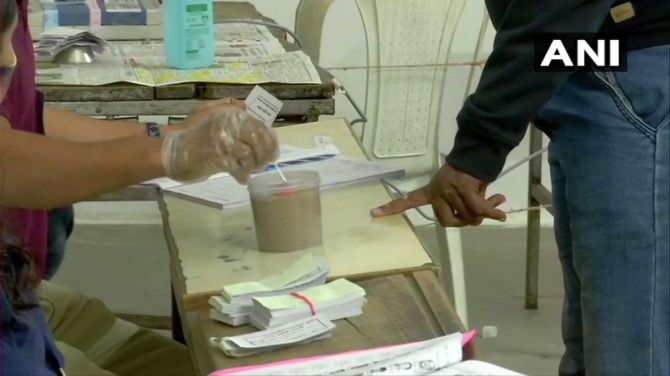 IMAGE: As per the State Election Commission, there are a total of 1.14 crore voters, including 60.60 lakh men and 54.06 lakh women. Photograph: ANI/Twitter

The municipal corporation elections are being seen as a test for Rupani as it may set the tone for the state assembly polls due next year.

Votes will be counted on February 23.

On February 28, elections to 31 district and 231 taluka panchayats and 81 municipalities will also be held in the state.