A man rammed a van into worshippers coming out of a mosque in north London after special Ramzan prayers on Monday, killing one person and injuring 10 others in what British Prime Minister Theresa May described as a "sickening" terrorist attack on Muslims. 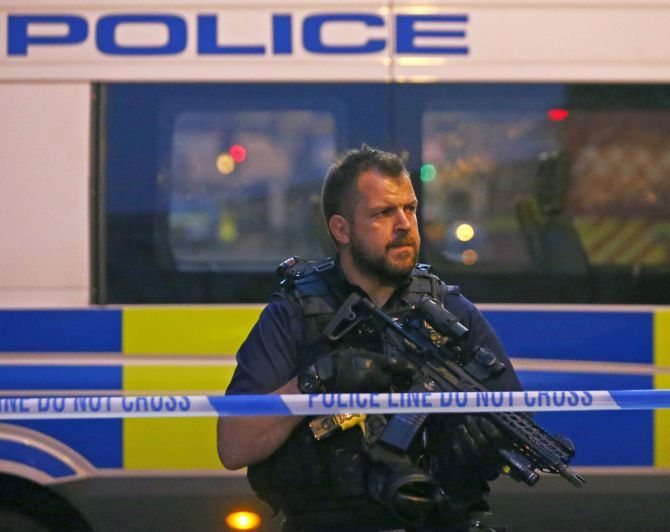 IMAGE: Heavy presence of armed police officers swooped to the scene shortly after the drama unfolded near the place of worship. Photograph: Neil Hall/Reuters

The attack -- the fourth terror assault to jolt Britain in four months -- occurred just after midnight outside the Muslim Welfare House, which houses a mosque, on the Seven Sisters Road when a group of people were helping a man who had collapsed.

The site of the incident is close to another mosque near the Finsbury Park on the same road.

One man was pronounced dead at the scene and eight others were injured. Two others were treated for minor injuries.

A 48-year-old man, the driver of the van, was detained by members of public at the scene and then arrested by police on suspicion of attempted murder.

"It is a reminder that terrorism, extremism and hatred take many forms; and our determination to tackle them must be the same whoever is responsible," May said in a statement after chairing a meeting of the government's emergency COBRA committee.

In an attempt to counter some criticism over the delay in classifying the incident as a terrorist attack, she said: "Officers were in the immediate vicinity as the attack unfolded and responded within one minute. Police declared it a terrorist incident within eight minutes."

Home Secretary Amber Rudd described the attack as an appalling incident and said police were treating it as a "terrorist incident".

Metropolitan Police deputy assistant commissioner Neil Basu said the man who died was already receiving first aid from members of the public and it was not yet known if his death was caused by the attack.

"This is being treated as a terrorist attack and the Counter Terrorism Command is investigating. At this early stage of investigation, no other suspects at the scene have been identified or reported to police, however the investigation continues," said Basu, London’s senior counter-terrorism coordinator.

"All the victims were Muslim and there are currently no other suspects," he added. 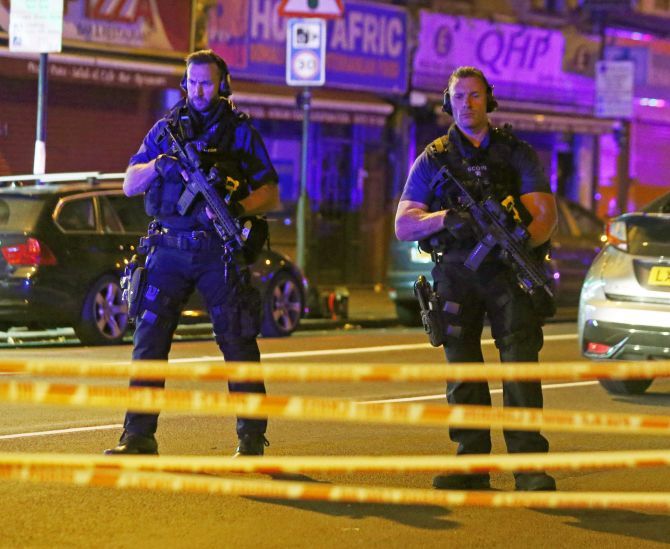 IMAGE: Armed police officers attend to the scene after a vehicle collided with pedestrians in the Finsbury Park neighborhood of North London. Photograph: Neil Hall/Reuters

Eyewitness Abdul Rahman said the driver said he wanted to "kill all Muslims".

"I hit him on his stomach... and then me and the other guys... we held him to the ground until he couldn't move. We stopped him until the police came," Rahman said.

Another witness said: "The van was driving towards us to try and basically hit us at speed. When he got arrested, he was taunting, saying, 'I'd do it again, I'd do it again'."

A spokesperson for the Metropolitan Police said the man has been taken to hospital as a precaution, and will be taken into custody once discharged. He will also be subject of a mental health assessment in due course.

Toufik Kacimi, chief executive of the Muslim Welfare House, said the man who was arrested had to be rescued by the imam at the centre to stop him being attacked.

Kacimi said when he did so, the driver said to him: "I've done my bit."

Met Police Commissioner Cressida Dick said there is now an ongoing investigation by the Counter Terrorism Command to establish why this attack was carried out.

"London is a city of many faiths and many nationalities. An attack on one community is an attack on all of us. Terrorists will not succeed in their attempts to divide us and make us live in fear," the commissioner said.

Prime Minister May praised the resilience of the "extraordinary city" of London, which has suffered the second terrorist attack this month.

"It is home to a multitude of communities that together make London one of the greatest cities on earth. Diverse, welcoming, vibrant, compassionate, confident and determined never to give in to hate," she said in her statement.

She added: "This was an attack that once again targeted the ordinary and the innocent going about their daily lives. This time British Muslims as they left a Mosque having broken their fast and prayed together at this sacred time of year.

"Today we come together -- as we have done before -- to condemn this act and to state once again that hatred and evil of this kind will never succeed."

She said security at mosques and other places of worship in the lead up to Eid Al-Fitr to reassure the community.

"This was an attack on Muslims near their place of worship. And like all terrorism, in whatever form, it shares the same fundamental goal. It seeks to drive us apart; and to break the precious bonds of solidarity and citizenship that we share in this country. We will not let this happen," she said. IMAGE: Ambulance services were rushed to the spot and the area was cordoned off by the police after the van hit into the pedestrians. Photograph: Neil Hall/Reuters

Opposition Labour leader Jeremy Corbyn, who is an MP from the area, visited the area and said: "I'm totally shocked at the incident at Finsbury Park tonight. My thoughts are with those and the community affected by this awful event."

London Mayor Sadiq Khan condemned the attack and said more officers were being deployed at places of worship to reassure the community. He said the attack was deliberate and targeted "innocent Londoners, many of whom were finishing prayers during the holy month of Ramzan".

"Terrorism is terrorism...While this appears to be an attack on a particular community, like the terrible attacks in Manchester, Westminster and London Bridge it is also an assault on all our shared values of tolerance, freedom and respect," he said, adding that the city was grieving and still recovering from the Grenfell Tower fire tragedy.

"This is a resilient city. There is far more that unites us than divides us," he added.

Scotland Yard said armed police were at the scene, with the investigation being carried out by Counter Terrorism Command and an extra officers deployed to reassure Muslims.

The Muslim Council of Britain has called for extra security around mosques, describing the attack as "the most violent manifestation" of Islamophobia. 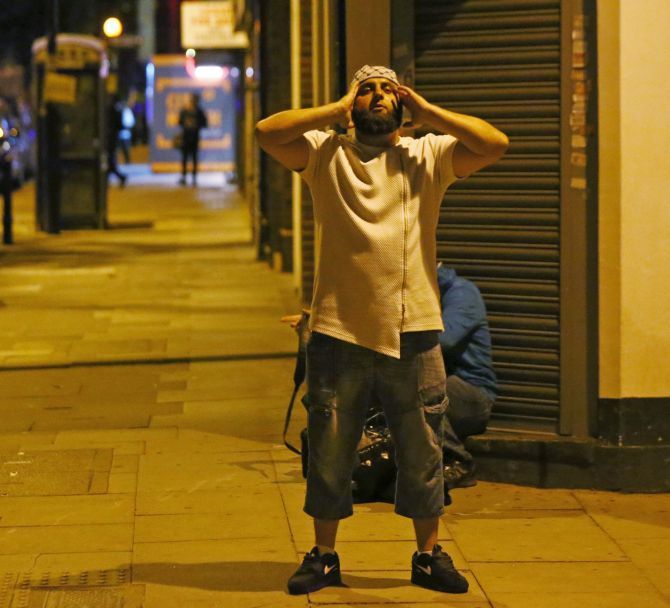 IMAGE: A man prays after a vehicle collided with pedestrians near a mosque in the Finsbury Park neighborhood of North London. Photograph: Neil Hall/Reuters

The council's secretary general Harun Khan said he expected authorities to step up security "as a matter of urgency", adding many would feel "terrorised" following the incident.

London's transport authority said that the Seven Sisters road had been closed due to an "emergency services incident".

The city's ambulance service said in a statement that it had sent "a number of resources" including ambulance crews, paramedics and specialist response teams to the scene.

"An advance trauma team from London's Air Ambulance has also been dispatched by car," the statement said.

At least two witnesses told Sky News that there were three men in the van, but the Met Police statement seems to directly contradict that, saying no other suspects had been identified or reported to police. IMAGE: The police, who termed the collision a “major incident”, are investigating whether it was accidental or deliberate. Photograph: Neil Hall/Reuters

Another eyewitness, who lives in a flat on the Seven Sisters Road, said the van seemed to have hit people who were coming out of the Finsbury Park mosque after prayers finished, the BBC reported.

The attack marks the fourth terrorist incident in the UK in four months, after attacks in Westminster, Manchester and on London Bridge.

Eight people were killed and 50 injured on June 3 when three Islamist militants drove into pedestrians on London Bridge and stabbed people at nearby restaurants and bars.

On March 22, a man drove a rented car into pedestrians on Westminster Bridge in London and stabbed a policeman to death before being shot dead. The attack killed five people. 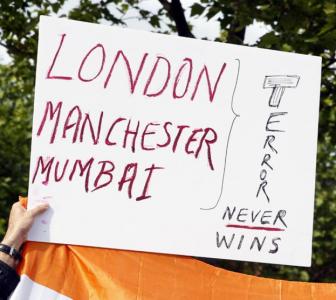 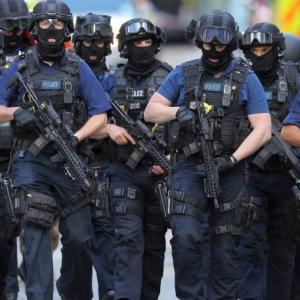 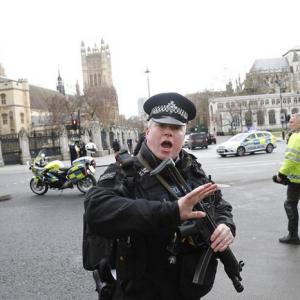