A massive pan-India inoculation drive against COVID-19 was set in process on Tuesday with more than 56 lakh doses of the Covishield vaccine flown to 13 cities across India from Pune and taken to designated national and state-level stores amid tight security. 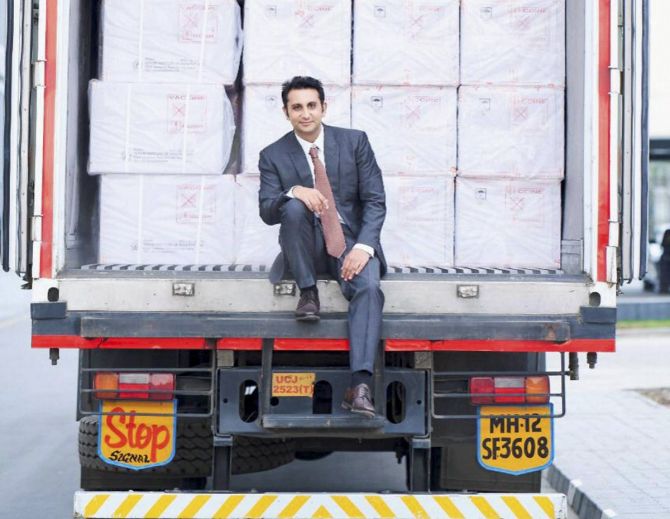 IMAGE: Serum Institute of India (SII) chief Adar Poonawalla sits on a truck loaded with Covishield vaccines during the dispatch of the first shipments of the vaccine doses for multiple locations across India. Photograph: Kind courtesy @adarpoonawalla/Twitter

With the vaccinations scheduled to begin on January 16 starting with healthcare and frontline workers in the first phase, the Centre said all the vaccine vials -- 1.1 crore of Covishield from the Serum Institute of India and 55 lakh of Covaxin from Bharat Biotech -- will be received by January 14.

'Puja' was performed before three temperature-controlled trucks rolled out of Serum Institute of India gates in Pune shortly before 5 am and moved towards the airport, about 15 km away, from where the vaccines were transported by planes across India. 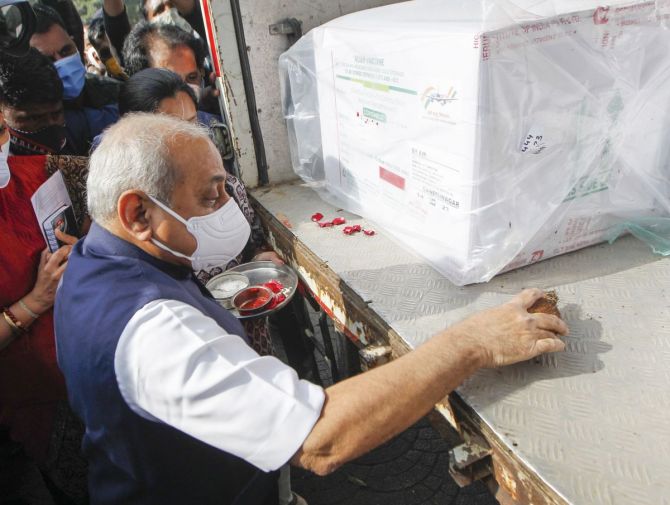 IMAGE: Gujarat Deputy Chief Minister Nitin Patel performs a puja after arrival of the first batch of Covishield vaccines from the Serum Institute of India, at the Civil Hospital in Ahmedabad, on Tuesday. Photograph: PTI Photo

"This is a proud and historic moment as scientists, experts and all other stakeholders took great efforts while making this vaccine in less than a year," SII CEO Adar Poonawalla said after the vaccine rolled out of the facility.

He said there are plans to provide five to six crore more doses by February.

Poonawalla said the SII has offered the vaccine to the central government at a special price of Rs 200. 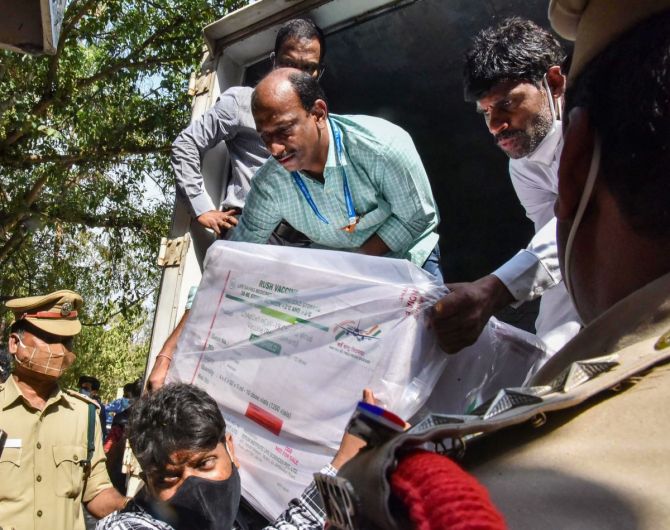 "This is one of the most affordable vaccines in the world and we are offering it to the GoI at a special price just to support the Prime Minister's vision and to support the 'aam aadami' of our country," he added.

He also said that once the SII gets the requisite permission, the vaccine will be made available in the private market for Rs 1,000.

Another vaccine consignment on three trucks left SII for Mumbai in evening and will be sent from there to 27 places across the country on Wednesday. 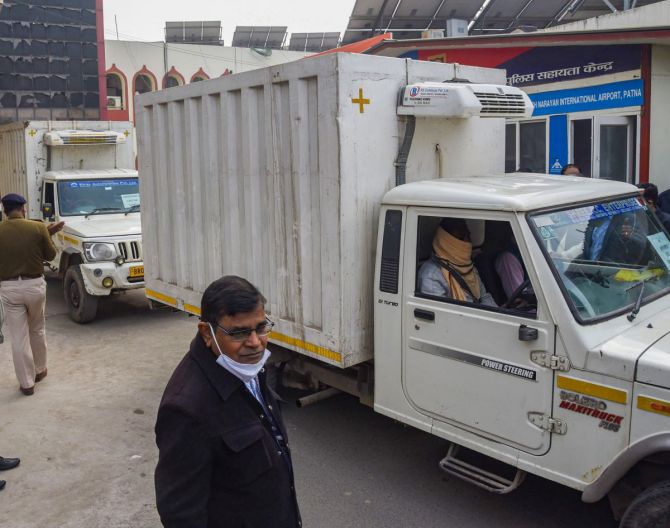 GoAir, another budget carrier, said it carried its first batch of 70,800 vials from Pune to Chennai. 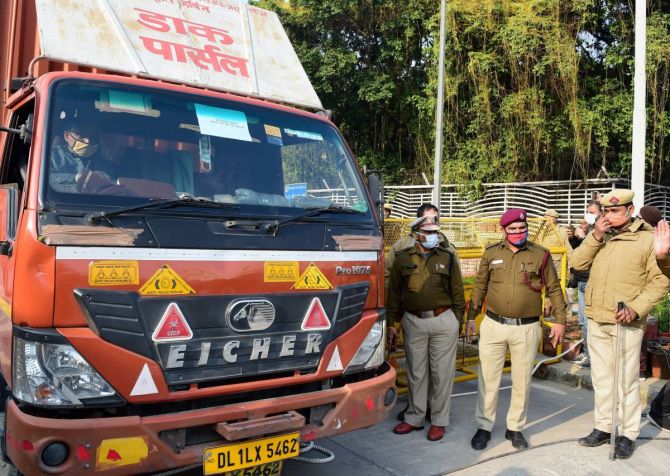 IndiGo moved the vaccines from Pune to Chandigarh (20,450 vials) and Lucknow, where Uttar Pradesh's Health Minister Jai Pratap Singh and senior officials were present at the airport.

Prayers were offered again at the airport before the dispatching of the container to a vaccine storage facility in the state capital. 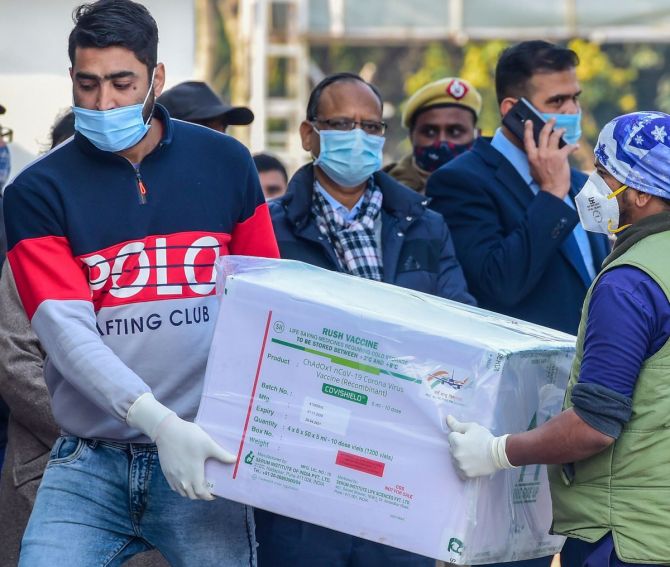 Gujarat Deputy Chief Minister Nitin Patel, who visited the the airport in Ahmedabad, described the arrival of the vaccines as a 'much-awaited moment'.

"The day has finally arrived. We are fully ready for the vaccination drive starting January 16. Our officials received the consignment and took them to the state vaccine centre," Odisha Additional Chief Secretary, Health and Family Welfare, P K Mohapatra said in Bhubaneswar.

Apart from the 1.1 crore doses of Covishield being procured from the Serum Institute of India, 55 lakh doses of indigenously developed Covaxin were being obtained from Bharat Biotech, Union Health Secretary Rajesh Bhushan said at a press conference in Delhi. 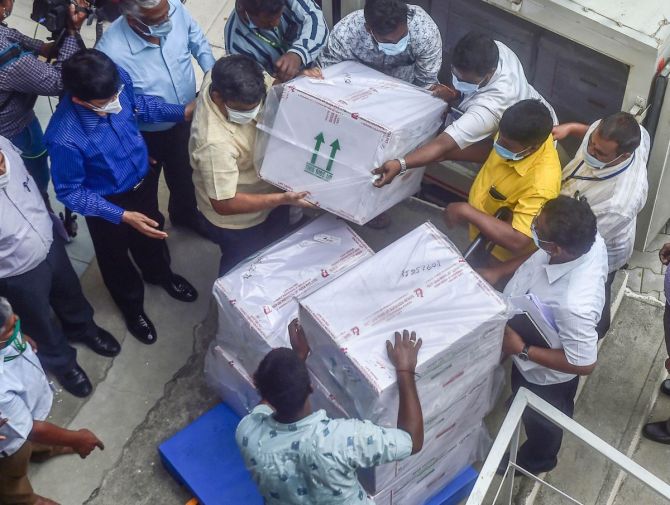 Bharat Biotech was also scheduled to dispatch vaccines from the Rajiv Gandhi International Airport in Hyderabad on Tuesday evening, a senior official of the Airports cargo division said.

Bhushan said there are four Central Government Medical Stores Depots at Chennai, Karnal, Kolkata and Mumbai where the Oxford COVID-19 vaccine, Covishield, doses are being received. 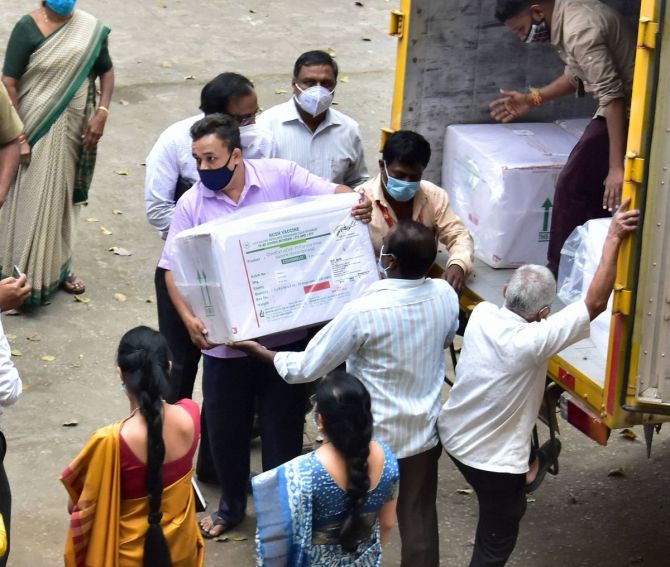 IMAGE: Workers unload the first consignment of COVID-19 vaccine from a temperature-controlled truck to a storage facility in Bengaluru. Photograph: Shailendra Bhojak/PTI Photo

Besides this, all states have at least one regional vaccine store. Some big states have multiple stores. Uttar Pradesh has nine such stores, Madhya Pradesh and Gujarat four each, Kerala has three such facilities, Jammu and Kashmir, Karnataka and Rajasthan two each, he said.

He said there will be a gap of 28 days between two doses of COVID-19 vaccine and its effectiveness begins 14 days after the second dose.

"So we urge people to keep following COVID appropriate behaviour," he said. 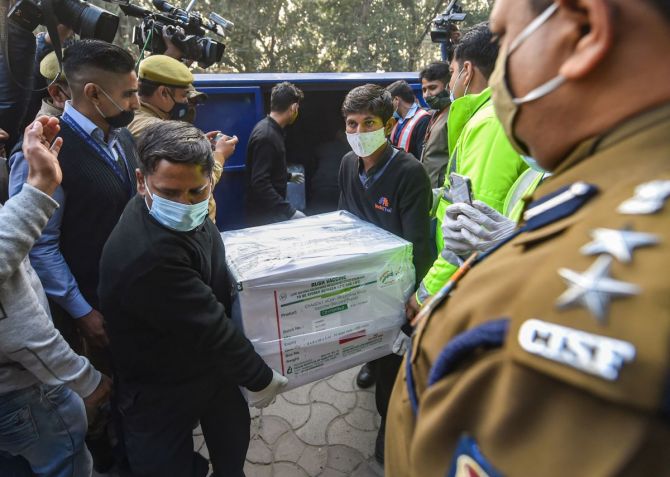 NITI Aayog member Dr V K Paul said that Covishield and Covaxin have been tested on thousands of people.

"They are the safest and there is no risk of any significant side effect."

Bhushan said Zydus Cadila, Sputnik V, Biological E and Gennova are the other vaccines in advanced stages of clinical trials in India.

"In the coming days you may see some of these vaccines approaching the drug controller for emergency use authorisation," he said. IMAGE: Workers unload from a plane the first consignment of Covishield vaccines, dispatched from Serum Institute of India, at Biju Patnaik Air port in Bhubaneswar, on Tuesday. Photograph: PTI Photo

He said there will be a sequential roll-out of COVID-19 vaccination. 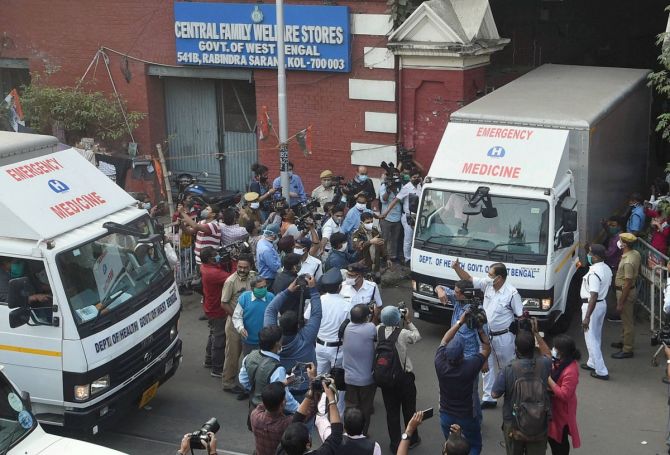 The health secretary said the five key principles for anti-coronavirus vaccination are to ensure people's participation, utilise the experience of elections and universal immunisation programme, making no compromise on scientific and regulatory norms and on existing healthcare services.

The government on Monday placed firm orders in advanced commitments for over six crore doses of COVID vaccines from SII and Bharat Biotech for inoculating three crore healthcare and frontline workers in the first phase. The cost is Rs 1,300 crore. 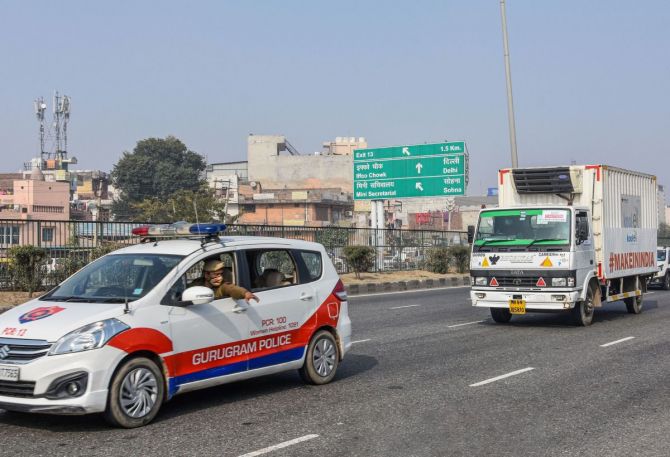 Interacting with chief ministers on Monday, Prime Minister Narendra Modi underscored the enormity of what he called the world's biggest vaccination exercise.

Over 30 crore citizens will get the jabs in the next few months in India against only 2.5 crore people vaccinated so far in over 50 countries in around a month, he said.

Covishield is developed by Oxford University and British-Swedish company AstraZeneca and manufactured by the SII.

Bharat Biotech has developed the indigenous vaccine Covaxin in collaboration with the Indian Council of Medical Research and the National Institute of Virology.