Woman living in her car helps the homeless in Houston

Dominick SeJohn Walton spots a man with a shopping cart piled high with belongings and a sign that says "Homeless. Please Help" under a Texas highway overpass.

She hands him a plastic bag filled with a baloney and cheese sandwich, cookies, and applesauce. On the outside she has written in permanent blue marker: 'God Bless. Jesus loves you. I love you!' 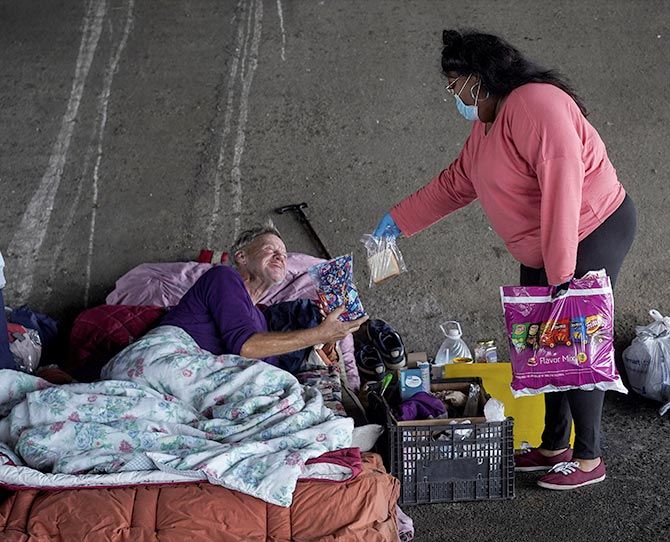 The 27-year-old is what makes people repose their faith in humanity. She knows what it is like to be homeless and hungry. She is currently living mainly in her car, sleeping at her sister's apartment in Houston sometimes.

Talking of her generosity, she explains, "I started serving meals to the homeless because I understand what it's like not to know where your next meal is going to come from and that's the least that I feel like we can do for our community is to give back." 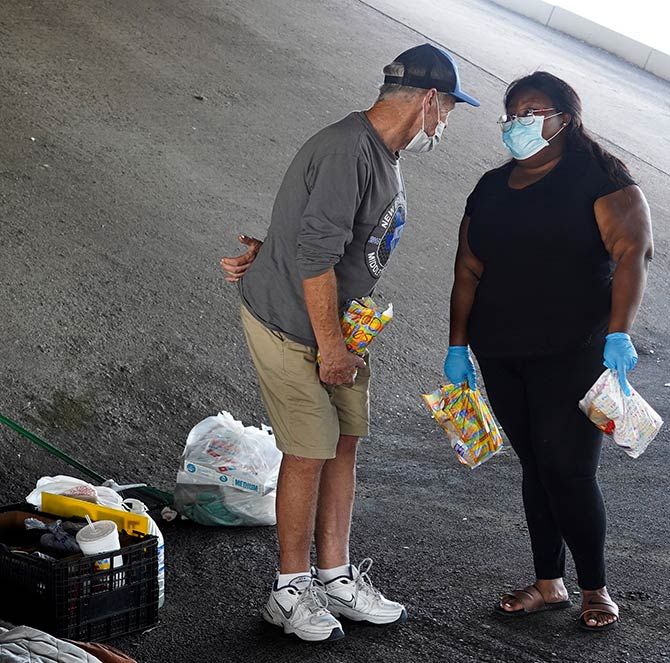 IMAGE: The 27-year-old drives around Houston making sure she can help as many homeless people. Photograph: Go Nakamura/Reuters

Asked about the circumstances that led to her becoming homeless, she recounts that she became depressed after following surgery for an ectopic pregnancy, which led her to quit her job as a gas station cashier. 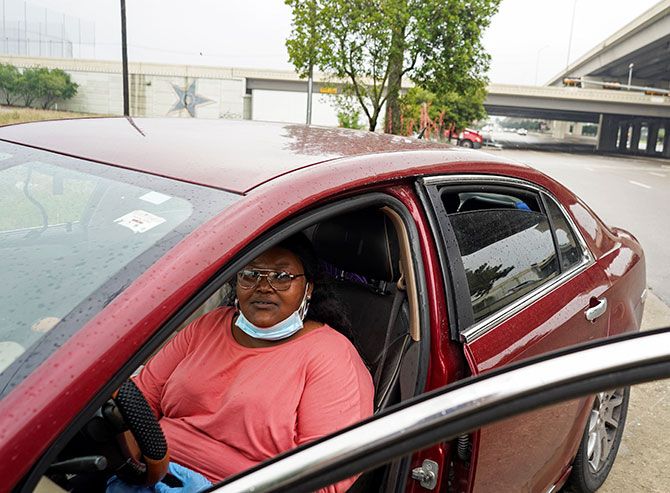 IMAGE: Walton in her Chevrolet Malibu, her home after she became depressed and quit her job. Photograph: Go Nakamura/Reuters

The move led her to her present situation -- living out of her Chevrolet Malibu, trying to save enough money to start a t-shirt business featuring her own designs.

In the United States, many homeless are choosing to stay out on the streets rather than take refuge in shelters -- where the coronavirus can spread fast. 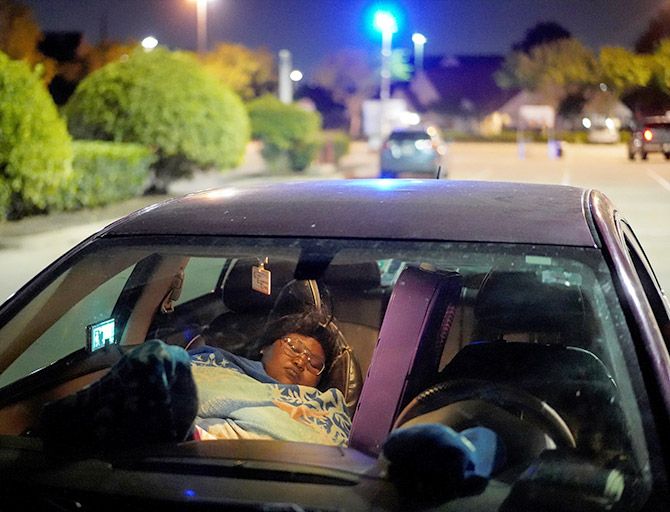 IMAGE: Dominick Walton, who is homeless, sleeps in her car amid the coronavirus disease. Photograph: Go Nakamura/Reuters

Walton, who was recently hired by a non-profit organisation that distributes meals to low-income families, buys the groceries herself or uses leftovers from her employer, making the bags in her sister’s apartment, where her 1-year-old and 4-year-old nieces play. 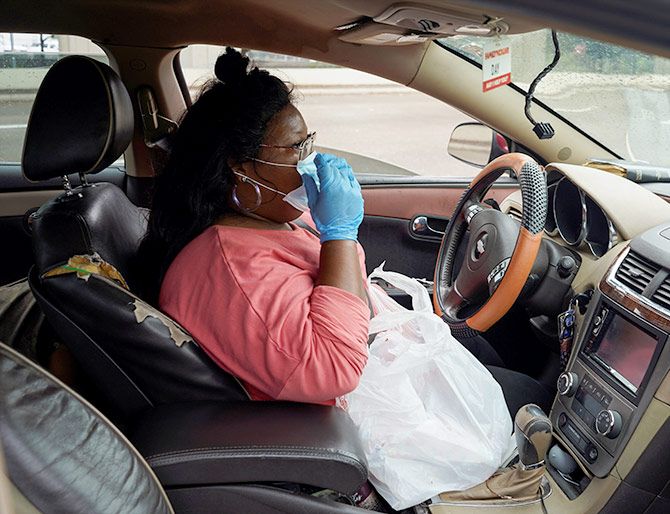 IMAGE: Walton adjusts her mask in her car before she drives to the next location to serve food to homeless people. Photograph: Go Nakamura/Reuters

When she is done for the day, she parks her car near a mall, park, or just a quiet neighbourhood, propping her cellphone against the car window while she stretches out in the front seat. 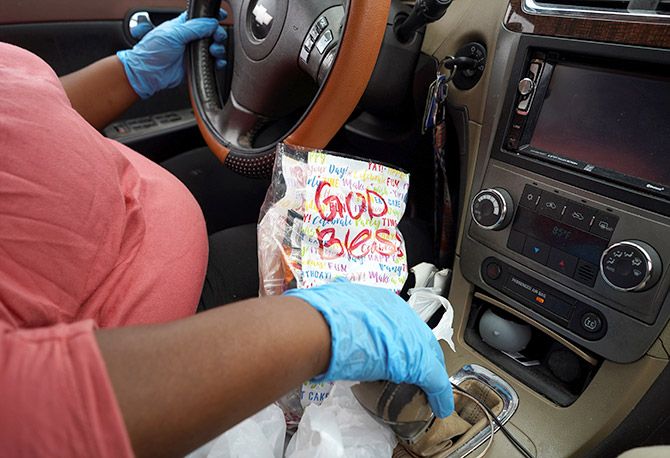 IMAGE: She puts a message of love and hope on every food bags she makes for homeless people amid the coronavirus disease. Photograph: Go Nakamura/Reuters

Her dreams: A t-shirt business so successful that she can give away even more food. 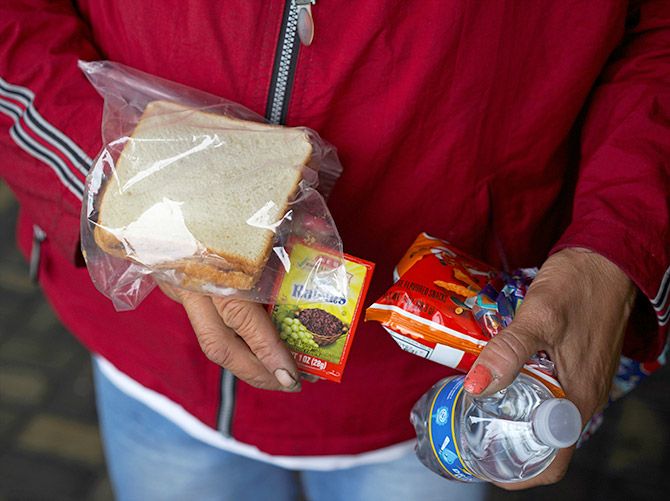 IMAGE: A homeless person shows what is contained in the food bag she was given by Dominick Walton, who is also homeless herself, amid the coronavirus disease. Photograph: Go Nakamura/Reuters
AGENCIES