US welcomes remains of 55 soldiers from Korean War

“Today, our boys are coming home.”

United States Vice President welcomed the arrival of the remains of as many as 55 American servicemen from the Korean War. 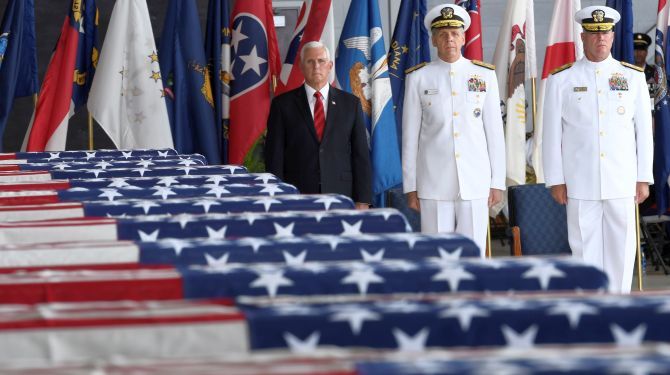 IMAGE: US Vice President Mike Pence and Admiral Phil Davidson, US Indo-Pacific Commander, honour the remains of US soldiers from the Korean War at Joint Base Pearl Harbor in Honolulu, Hawaii. Photograph: Hugh Gentry/Reuters

Pence attended a ceremony Hawaii’s Hickam Air Force Base along with his wife, Karen and two individuals who had lost their fathers during the Korean War -- Diana Brown Sanfilippo and Rick Downes, as reported by Fox News.

Pence said that Sanfilippo was four years old when she lost her father, who was part of a recon mission, while Downes was aged three when he lost his father, who was operating radar on a B-26 Bomber.

Taking to his Twitter handle, Pence said he was “honoured” to be joined by the two in the ceremony. 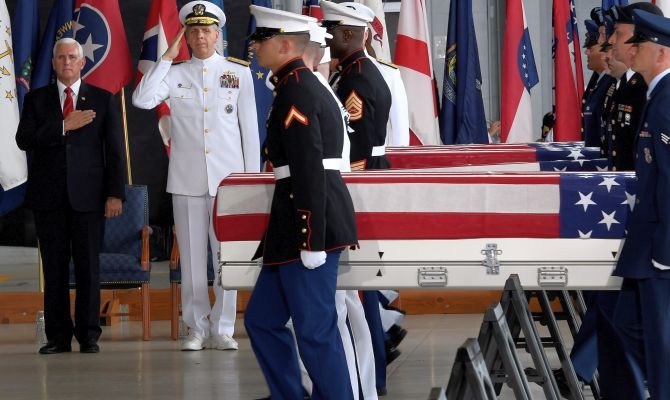 IMAGE: Pence stated that the gesture from North Korean leader Kim Jong-un was proof of “tangible progress in our efforts to achieve peace on the Korean Peninsula”. Photograph: Hugh Gentry/Reuters

A US military aircraft had travelled to North Korea to ferry the 55 cases.

Pence further stated that the gesture from North Korean leader Kim Jong-un was proof of “tangible progress in our efforts to achieve peace on the Korean Peninsula”.

“Today, they are known but to God. But soon we will know their names and we will tell their stories of courage,” Pence, whose father had also fought in Korea, said. “I know President Trump is grateful that Chairman Kim kept his word. But today is just a beginning, and our work will not be complete until all our fallen heroes are accounted for,”he added.

The return of the US servicemen’s remains was part of a deal that was agreed to by Trump and Kim back in their summit in June. There are as many as 7,699 US servicemen that are unaccounted for from the 1950-53 Korean War, with around 5,300 believed to have died in North Korea. Those who died in South Korea, in aircraft crashes or shipwrecks at sea and have not been recovered, account for the remaining servicemen. Also, some are believed to have been taken to China.

According to the Pentagon, joint efforts made by the US and North Korea from 1996 to 2005, termed as “joint field activities,” led to the recovery of as many as 229 caskets, out of which 135 were identified. Also, between 1990 and 1994, North Korea returned around 208 caskets. 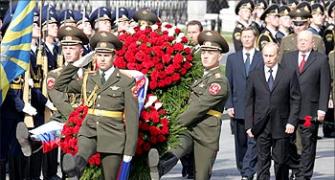 PHOTOS: The ones that got left behind at Dunkirk