Over 40 people died in rain-related incidents, majority of them in Uttar Pradesh, while incessant rainfall in Bihar left the streets of state capital Patna and other areas waterlogged and residences of at least two ministers marooned. 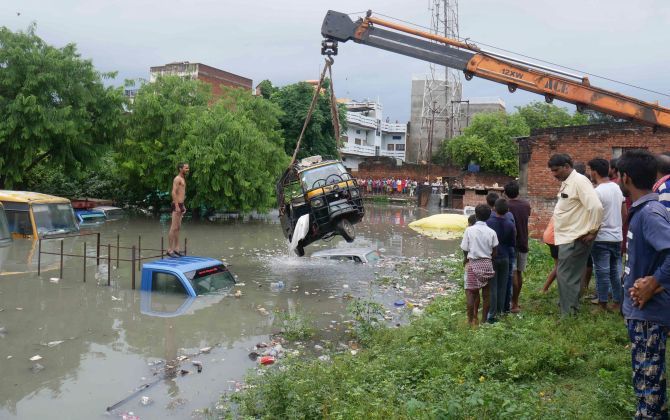 IMAGE: A crane pulls out an autorickshaw from a flooded area in Mirzapur district. Photograph: PTI Photo

Also, three deaths each were reported from Rajasthan and Madhya Pradesh, while one person died in Jammu and Kashmir.

In Bihar, heavy rains in several parts of the state since Friday have thrown normal life out of gear as it affected rail traffic, healthcare facilities and schools. 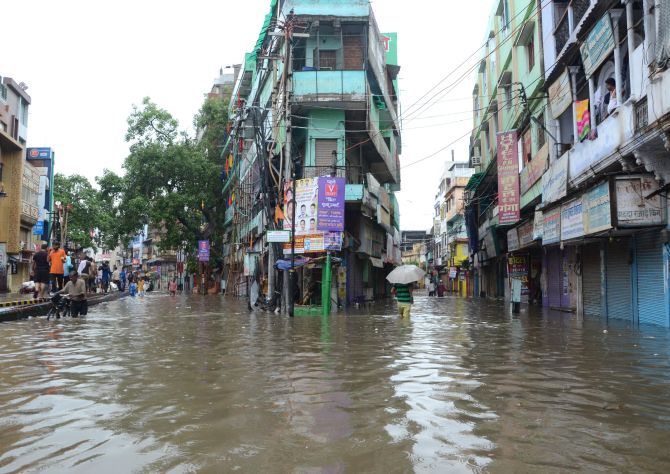 The weather department has forecast heavy rainfall for the city till September 30. The Patna district administration has ordered closure of all schools till Tuesday.

Nalanda Medical College Hospital premises, the second largest healthcare facility in Patna, was waterlogged as also that of the Gardanibagh hospital.

Chief Minister Nitish Kumar reviewed the situation in a video conference meeting with officials who informed him that the state received an average rainfall of 50 mm since Friday with districts like Vaishali and Nawada recording more than 200 mm. 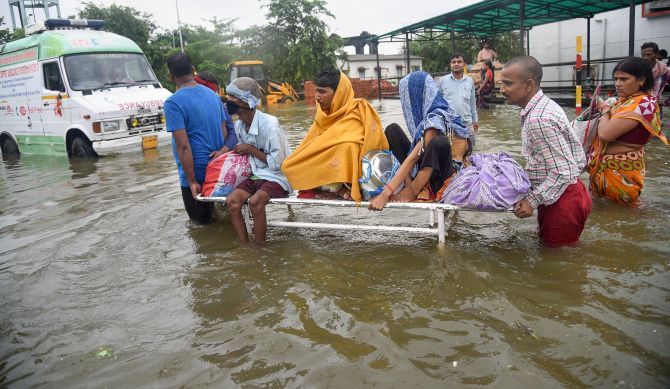 The district magistrate said a contingent of National Disaster Response Force and State Disaster Respons Force personnel was pressed into service to rescue residents from the areas alarmingly waterlogged.

East Central Railway officials said rail traffic was suspended on the Darbhanga-Samastipur section in the morning as tracks at some places got inundated due to heavy rain, leaving at least three trains stranded.

The NDRF said 18 of its teams have been pressed into service in districts which have received heavy rainfall.

In the desert state of Rajasthan, three students were killed when a wall of a government school collapsed after excessive rainfall in Udaipur district, police said. The incident occurred early morning in Government Middle School, Thobwara. The school, which is situated on the foothills, was waterlogged due to excessive rainfall on Friday night, the police said. 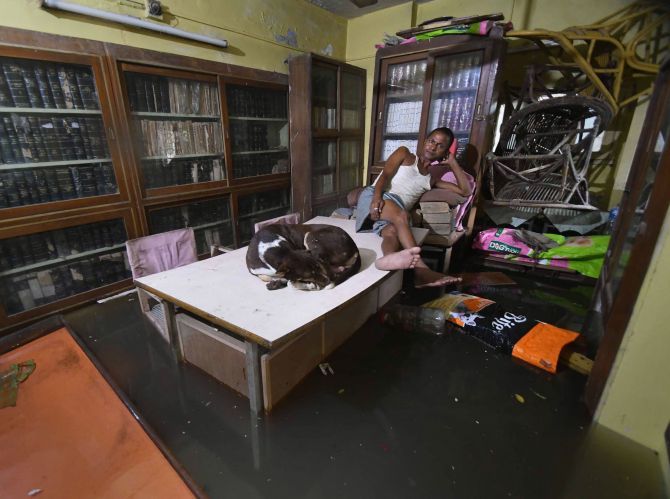 IMAGE: A man with a dog sits on a table after flood waters entered a library following heavy rainfall in Patna. Photograph: PTI Photo

Meanwhile, three persons, including a police constable, were swept away in the strong currents of a swollen nullah in Seoni district of Madhya Pradesh, police said. The incident occurred on Ghansor-Kedarpur Road on Friday night.

The three bodies were recovered about a kilometre away from the place of the incident.

"It was raining incessantly and the water level of the nullah had gone up," Seoni's Additional Superintendent of Police Kamlesh Kharpuse said.

Madhya Pradesh has been witnessing heavy rainfall over the last couple of weeks. 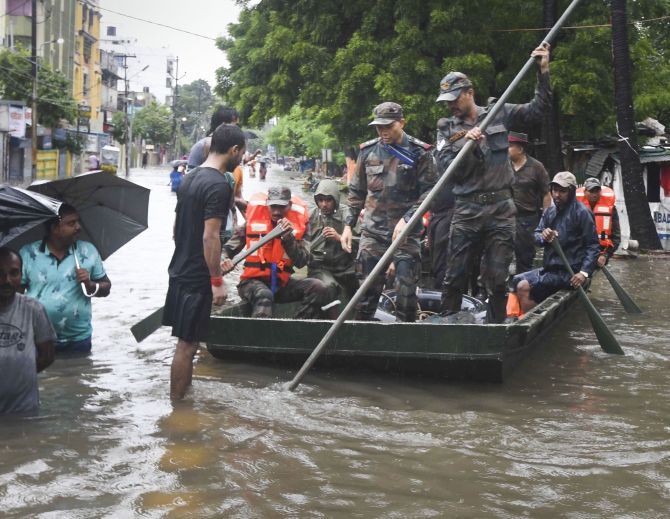 In Jammu and Kashmir's Samba district, a 22-year-old woman was killed after she was struck by lightning. Heavy rains lashed wide parts of the Jammu province, causing waterlogging and traffic jams at many places in the city disrupting normal life.

In Himachal Pradesh, parts of the state received light rainfall on Saturday which brought the maximum temperature down by two to three notches below the season's average. 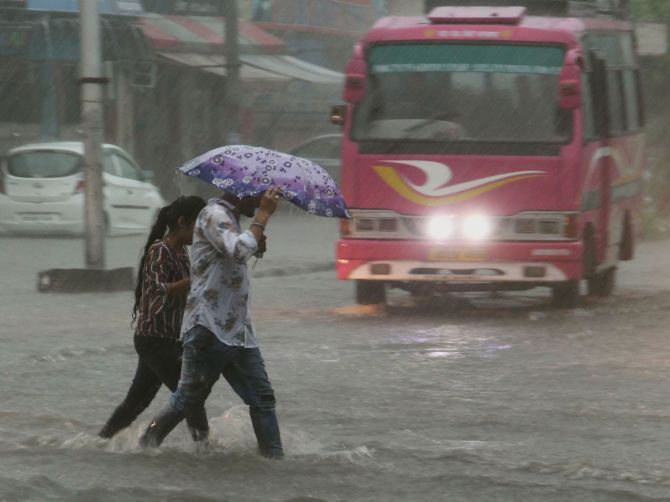 Meanwhile, River Krishna is in spate again following heavy rain in the upper catchment areas in Maharashtra and Karnataka. Consequently, the crest gates of major dams that were already full to the brim in Andhra Pradesh had to be opened for the third time in the last couple of months to let out floodwater into the Bay of Bengal.

The India Meteorological Department on Saturday forecast heavy to very heavy rain in parts of north Gujarat and the state's Saurashtra-Kutch belt over the weekend.