The clamour to boycott China-made products grew in the country following the killing of 20 Indian Army personnel by Chinese troops in a violent face-off in Ladakh's Galwan Valley, with two Union ministers on Thursday urging people not to go for Chinese products, even as the Indian Railways has decided to terminate a signalling contract worth Rs 471 crore given to a Chinese company in 2016. 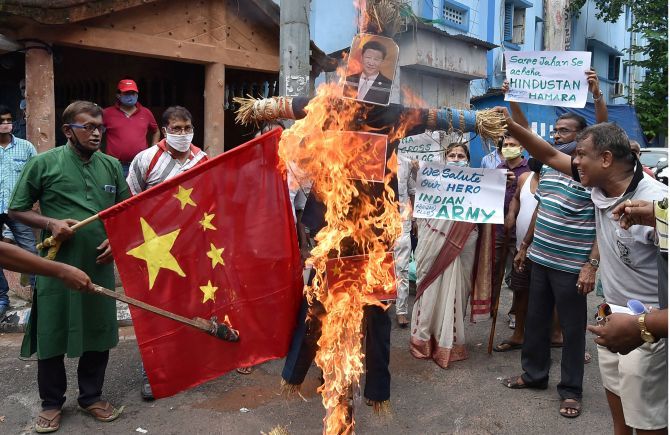 In a hardening of stance, sources said the government has decided to ask state-owned Bharat Sanchar Nigam Ltd not to use Chinese telecom gear in its 4G upgradation, which is being supported as part of the company revival package, while traders' body CAIT appealed to celebrities, including Bollywood actors, to stop endorsing products of Chinese brands as a mark of respect for the slain Indian soldiers.

Sources privy to discussions being held in Department of Telecom said it has been decided that BSNL will be asked not to use Chinese equipment in the upgradation to 4G network, which is being supported by its revival package.

The department is likely to seek tweaking of the tender in this regard. A similar message will be conveyed to Mahanagar Telephone Nigam Ltd, sources said.

Moreover, the department is even considering urging private operators to bring down their dependence on Chinese-made telecom equipment.

Twenty Indian Army personnel, including a colonel, were killed in a fierce clash with Chinese troops in the Galwan Valley in eastern Ladakh on Monday night, the biggest military confrontation between India and China in over five decades.

Union minister Ram Vilas Paswan appealed to people to boycott products from China and also directed officials of his ministry not to procure any Chinese products for day-to-day office use while his ministerial colleague Ramdas Athawale said all restaurants and hotels that sell Chinese food in India should be closed down.

"I want to appeal to everyone that the way China is behaving, we boycott all Chinese products," Paswan,said. 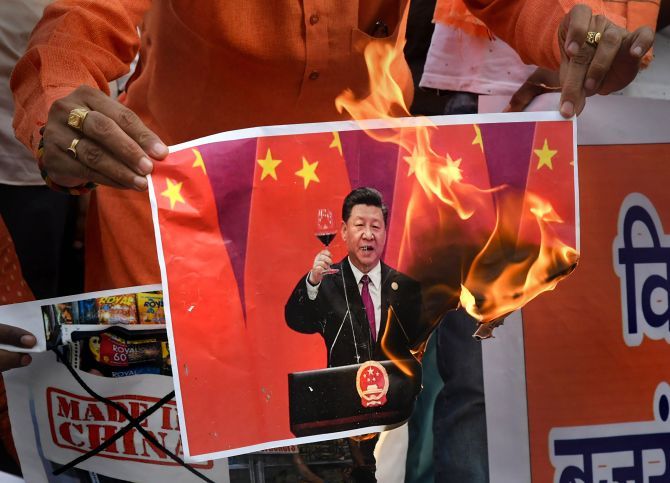 IMAGE: VHP amd Bajrang Dal activists burn a poster of Chinese President Xi Jinping in Bhopal after 20 soldiers were killed during the face-off between Indian and Chinese troops in Ladakh. Photograph: PTI Photo

Speaking to reporters, the food and consumer affairs minister also expressed concerns over illegal imports of sub-standard Chinese products like diyas and furniture and said the government would strictly implement the quality rules framed by the Bureau of Indian Standards.

The BIS, under the aegis of the consumer affairs ministry, has framed over 25,000 quality rules for different products so far.

"When our goods go abroad, they are checked. Our Basmati rice exports get rejected, but when their goods come to India, there is no strict quality control," the minister added.

Minister of State for Social Justice and Empowerment Athawale tweeted "China is a country that betrays. India should boycott all products that are made in China... All restaurants and hotels that sell Chinese food in India should be closed down."

Union Minister Nitin Gadkari said India should no longer depend on China and instead focus on research and innovation to ramp up domestic manufacturing.

The minister also said the government is working on formulating a new policy for import substitution.

Meanwhile, the railways announced its decision to cancel the signalling contract, given to the Beijing National Railway Research and Design Institute of Signal and Communication Group, for the Eastern Dedicated Freight Corridor's 417-km section between Kanpur and Mughalsarai due to "poor progress". 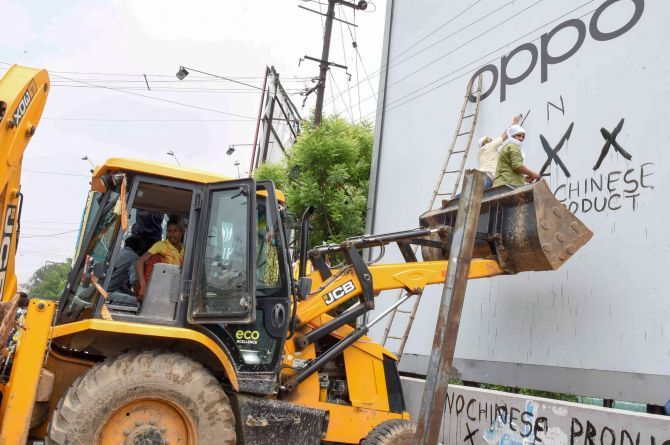 IMAGE: A Jan Adhikar party supporter climbs a JCB machine to blacken a banner of a Chinese mobile phone manufacturer as part of a protest against China, in Patna. Photograph: PTI Photo

Many linked the announcement by the railways with the violent face-off in the Galwan Valley, however, the Dedicated Freight Corridor Corporation Limited, the implementing agency of the project, made it clear that there was no link between the border face-off and the contract termination, the process for which had started as early as January 2019.

Officials said the Chinese firm was supposed to complete the work by 2019, but only 20 per cent of the work has been completed so far.

Asserting that the issue was under discussion with the World Bank since January this year as their progress was very slow, DFCCIL Managing Director Anurag Sachan said,"We approached them in April telling them of our decision to terminate the contract. We have decided to terminate the contract and if the World Bank disagrees, then we will approach the Railways to fund the section. There is no link between the termination of this contract and what is happening at the borders. It is purely coincidental."

The Confederation of All India Traders, in an open letter, has appealed Aamir Khan, Deepika Padukone, Katrina Kaif, Virat Kohli and others to stop endorsing Chinese products.

CAIT Secretary-General Praveen Khandelwal in the letter said that at a time when "China's army in the most clandestine manner has committed a barbaric attack on the Indian army at Ladakh border, the heart of every Indian is filled with deep anguish, resentment and abhorrence against the atrocities of the Chinese and their persistent attitude of antagonism towards India".

There were also anti-China protests in several parts of the country, including Jammu and Kashmir.

Thursday also, the Vishwa Hindu Parishad said it will conduct a door-to-door campaign across the country appealing to people to boycott Chinese goods and mobile phones.