Uneasy calm prevailed in Assam but West Bengal plunged deeper into chaos on Sunday over the new citizenship law with incidents of arson and loot reported from several parts of the country, acts Prime Minister Narendra Modi blamed on the "Congress and its friends". 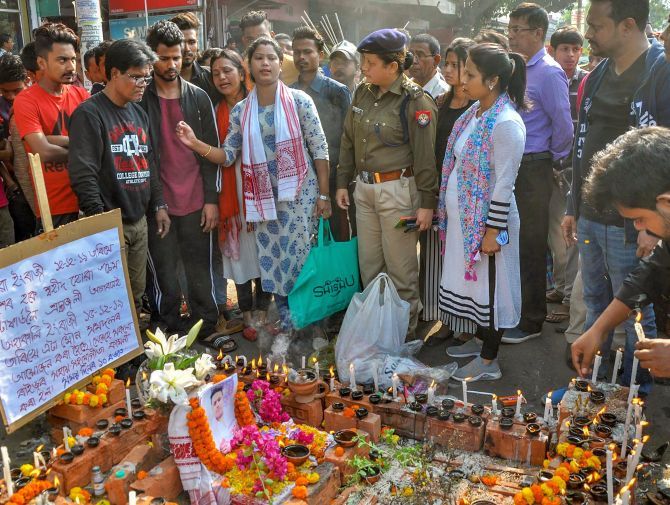 IMAGE: Civilians pay tributes to 17-year-old Sam Stafford, who died in an alleged firing incident in the city two days ago against Citizenship Amendment Bill, at Hatigaon area in Guwahati. Photograph: PTI Photo

Curfew was relaxed in Guwahati and Dibrugarh for several hours following improvement in the situation but peaceful protests were held amid calls by the Asom Gana Parishad for resignation of its ministers.

The AGP is part of the Bharatiya Janata Party-led government in Assam.

An under-pressure AGP took a U-turn and decided to join efforts to get the controversial law struck down by the Supreme Court.

"The Congress and its allies are stoking fire over the Citizenship Act, but people of Northeast have rejected violence. Actions of the Congress prove that all decisions taken in Parliament are correct," Modi said while addressing an election rally in Jharkhand's Dumka.

Without mentioning any community, he said those "fanning the fire" could be identified by their clothes.

"People who are setting fire (to property) can be seen on TV... They can be identified by the clothes they are wearing," Modi added.

Hitting out at the Trinamool Congress dispensation over advertisements against National Register of Citizens and citizenship law, governor Jagdeep Dhankhar said it is unconstitutional and a head of government can't use public money for such campaigns. 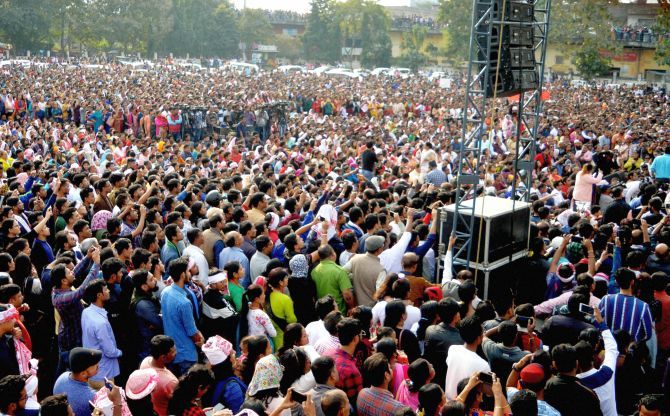 IMAGE: Protesters gather for a concert organised by All Artists of Assam against Citizenship Amendment Act, at AEI playground in Guwahati. Photograph: PTI Photo

Shops were also ransacked and people burned tyres in Deganga in North 24 Parganas.

Train services were hit in South 24 Paraganas district as protesters blocked tracks near Nungi and Akra stations, which was also ransacked. The mob also looted money from the ticket counter of the station.

Similar protests were reported from Domjur of Howrah district, and parts of Burdwan and Birbhum, with agitators taking out rallies and raising slogans against the Modi government.

The cost of damages to railway property assessed so far during the protest in Kharagpur division is over Rs 15.77 crore till Saturday, officials said.

In Assam's Guwahati, two more persons succumbed to gunshot wounds, taking the toll in police firing during protests against the citizenship law to four.

However, protesters claimed that five persons have died in police firing. 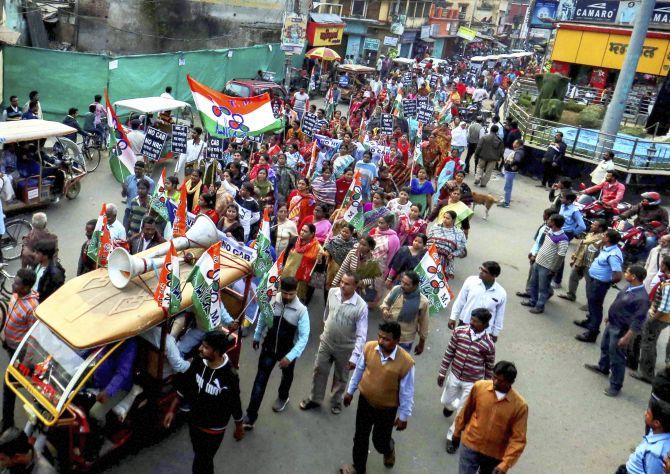 Special trains have been arranged to ferry passengers stranded in various parts of the state. The West Bengal chief minister has directed officials at Coochbehar and Jalpaiguri, two districts near Assam, to ensure supply of food and water to the passengers stranded due to the blockades.

AGP leader Kumar Deepak Das said the party would file a petition in the Supreme Court for revocation of the amended Citizenship Act, even as party functionaries urged its top brass to clear their stand on the issue.

Later, at a press conference, Bora said as the legislation has already become an Act, at least the Brahmaputra valley should be excluded and it may be implemented in the Barak valley.

The Barak valley, which has a significant Bengali population, has not seen any major agitation. 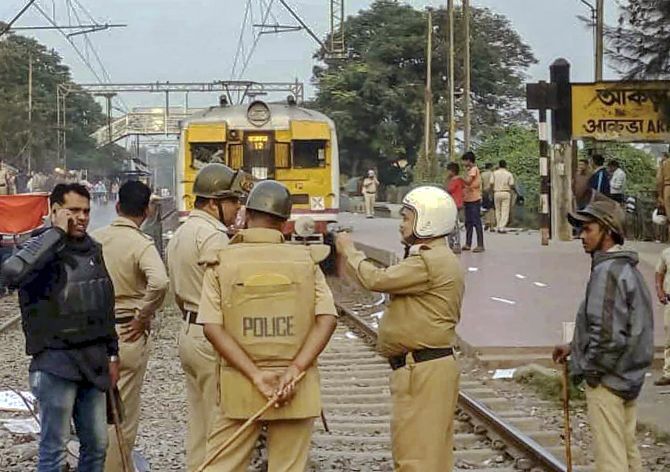 AGP leader and Assam minister Keshab Mahanta said the party has not left its "old stand" of opposing the law.

"Though we are a part of the NDA, our stand has not changed. We still do not want this Act to be implemented in Assam and the North East," he said.

The party's lone MP in Rajya Sabha, Birendra Prasad Baishya, opposed the Bill during discussion, but voted in favour of it following which the party is facing severe criticism.

Curfew imposed in Guwahati and parts of Dibrugarh district was relaxed for several hours with police using loudspeakers to inform the public about the relaxation.

Police said 175 people have been arrested and 1,406 taken into preventive custody across the state.

Protests have been raging across the Northeast and West Bengal over the amended Citizenship Act, as people fear that it might exacerbate the problem of illegal immigration.

Muslims across the country have joined the agitation, apprehending that the move could be a precursor to a country-wide NRC. 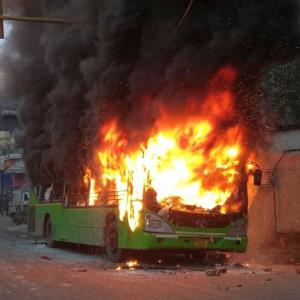