The United Kingdom has crossed the grim milestone of 1 million coronavirus cases as it prepares for a second complete lockdown in an attempt to curb the rapid spread of infections. 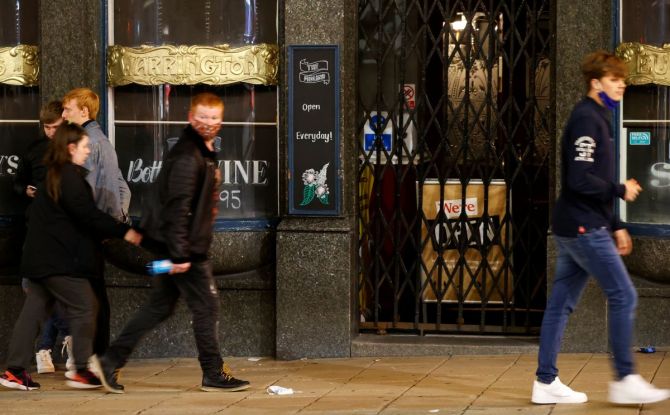 IMAGE: People walk in front of a pub the night before a local lockdown amidst the spread of the coronavirus disease in Liverpool, Britain. Photograph: Phil Noble/Reuters

UK Prime Minister Boris Johnson declared the latest stay-at-home rules for England, to take effect from Thursday and last until at least December 2, during a 10 Downing Street briefing on Saturday evening.

As the experts ran through the latest figures and statistics showing a surge in the numbers being infected by the deadly virus, Johnson declared that "no responsible PM can ignore the message of those figures" and must be humble in the face of nature, even as he faced a backlash from sections within his own Conservative Party and the Opposition Labour Party -- the former opposed to the harsh measures and the latter accusing him of acting too late.

"In this country alas, as across much of Europe, the virus is spreading even faster than the reasonable worst-case scenario of our scientific advisers whose models suggest that unless we act we could see deaths in this country running at several thousand a day. A peak of mortality alas far bigger than the one we saw in April," said Johnson.

The UK prime minister stressed that a complete lockdown was the only answer to prevent the overrunning of the country's state-funded National Health Service, which would be a "medical and moral disaster" beyond the raw loss of life. IMAGE: A closed store is seen during the first evening of the Welsh lockdown, amid the coronavirus disease outbreak, in Tenby, Wales. Photograph: Rebecca Naden/Reuters

The new rules, which will be debated in Parliament before a vote on Wednesday, will be enforced from midnight on Thursday until the start of December.

They would mean people in England will be allowed to leave home only for specific reasons, including for education; for work if someone cannot work from home; for exercise and recreation outdoors within your household or on your own with one person from another household; for medical reasons, appointments and to escape injury or harm; to shop for food and essentials; and to provide care for vulnerable people, or as a volunteer.

Non-essential shops, leisure and entertainment venues will all be closed and pubs, bars, restaurants must close except for takeaway and delivery services. Workplaces are expected to stay open where people can't work from home, such as in the construction or manufacturing sectors.

The new restrictions apply across England, the largest of the four nations that make up the United Kingdom, with the other three devolved nations of Scotland, Wales and Northern Ireland already under varying degrees of complete lockdowns.

"We have updated the devolved administrations on the action we are taking in England and stand ready to work with them on plans for Christmas and beyond," said Johnson, as he indicated that the tough action being taken at this stage may allow families to be able to unite and celebrate Christmas. 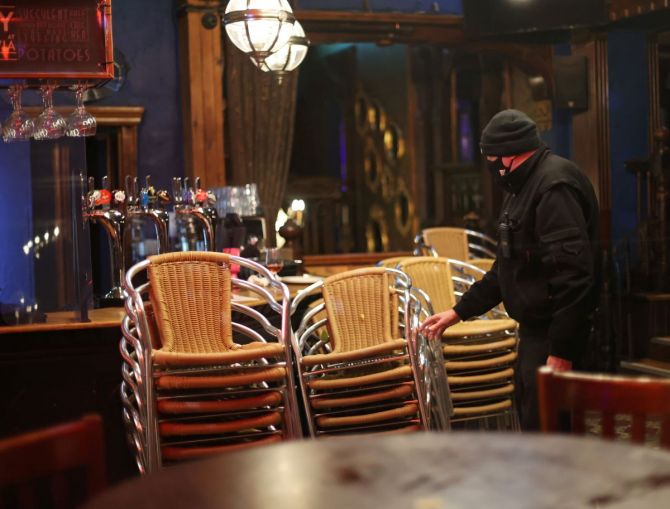 IMAGE: A man arranges chairs outside a bar before a local lockdown amidst the spread of COVID-19 in Manchester, Britain. Photograph: Carl Recine/Reuters

He also confirmed an extension to the government's furlough scheme, or taxpayer support for wages, until December.

However, several backbench Tory MPs from within his own party have lashed out at the severe restrictions, with some accusing him of bowing to pressure from scientists and putting businesses and the economy at peril.

The Opposition, on the other hand, accused Johnson of "burying his head in the sand" and losing out on crucial weeks to contain the spread of the infection by not calling a short circuit-breaker lockdown as demanded by Labour last month.

The Opposition leader, Sir Keir Starmer, has demanded the government must use this second lockdown to fix the "test, trace and isolate" system and keep the restrictions in place until the infection rate, the so-called R rate, is below 1. 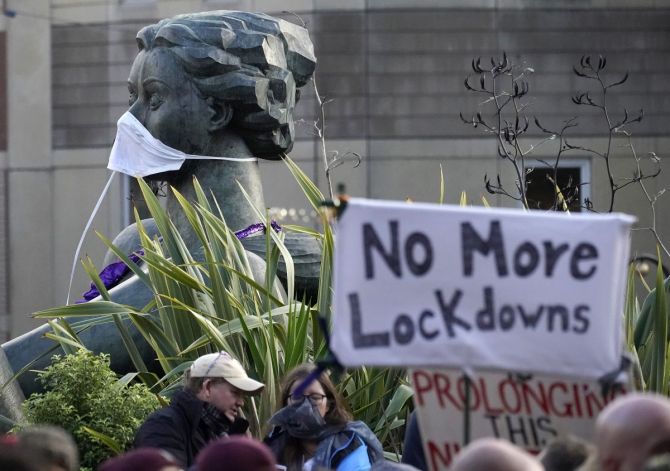 IMAGE: A mask sits on a sculpture named "The River" during a demonstration against a second lockdown in Victoria Square in Birmingham, United Kingdom. Photograph: Christopher Furlong/Getty Images

"This lockdown is going on to at least December 2, everybody's seen the figures, and, therefore, I don't think it's fair to pretend that Christmas is going to be normal in any sense of the word. I think we need to level with the public on that," he said.

The UK recorded another 21,915 confirmed coronavirus cases on Saturday, bringing the total since the pandemic beyond a million to 1,011,660.

Another 326 people were reported to have died within 28 days of a positive test, taking the country's death toll up to 46,555.