A 100-year-old army veteran, who became a national hero in the United Kingdom for raising over £32 million (Rs 320 crore) for healthcare charities by completing 100 laps around his garden using a walking frame and was knighted by Queen Elizabeth II, died in hospital on Tuesday after testing positive for coronavirus. Captain Sir Tom Moore, who served in India during World War II, had been admitted to Bedford Hospital in the east of England on Sunday after he required help with his breathing. His daughter, Hannah Ingram-Moore, said he had been treated for pneumonia over the past few weeks and last week tested positive for COVID-19.

"He will stay alive in our hearts forever," his family said in a statement, as tributes began pouring in for the much-loved figure.

UK’s Prime Minister Boris Johnson had announced Moore's special nomination in recognition of his dedication to raise funds for the National Health Service and other charities. He described Captain Moore as a "true national treasure" who "provided us all with a beacon of light through the fog of coronavirus”.

"On behalf of everyone who has been moved by his incredible story, I want to say a huge thank you," said Johnson, at the time.

The knighthood followed his appointment as an honorary colonel to mark his centenary on April 30. IMAGE: A tribute to Captain Sir Tom Moore is displayed at Piccadilly Circus shortly after it was announced that he has died in London, England. Photograph: Chris J Ratcliffe/Getty Images

When the war veteran set out to walk 100 laps of his garden in Marston Moretaine in Bedfordshire before his 100th birthday, he was aiming to raise a humble £1,000. But his determination to complete the challenge while using a walking frame captured the public's imagination during the pandemic and within days he had raised tens of millions of pounds, with the figure continuing to grow even after he had completed the 100th lap.

An online petition calling for him to be knighted received more than a million signatures and he was showered with nearly 150,000 birthday cards last April.

Conscripted to the 8th Battalion of the Duke of Wellington's Regiment in 1940, Moore served in India and Burma (now Myanmar) and then instructed at the Armoured Fighting Vehicle School. After the war, he became managing director of a concrete company.

The war veteran had since set up a foundation and a website called captaintom.org to raise money to combat issues such as loneliness and help fund more hospices. 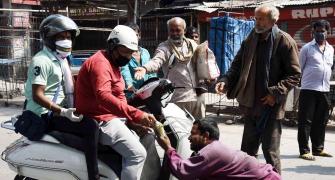 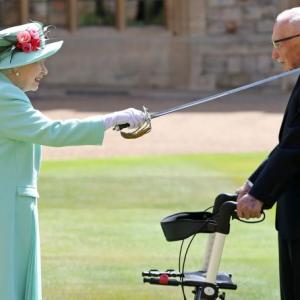