Over a month after coming to power in Maharashtra, Chief Minister Uddhav Thackeray on Monday expanded his Cabinet by inducting 36 ministers, including his son Aaditya and some gen-next leaders from political families, while Nationalist Congress Party's Ajit Pawar made a comeback as deputy CM. 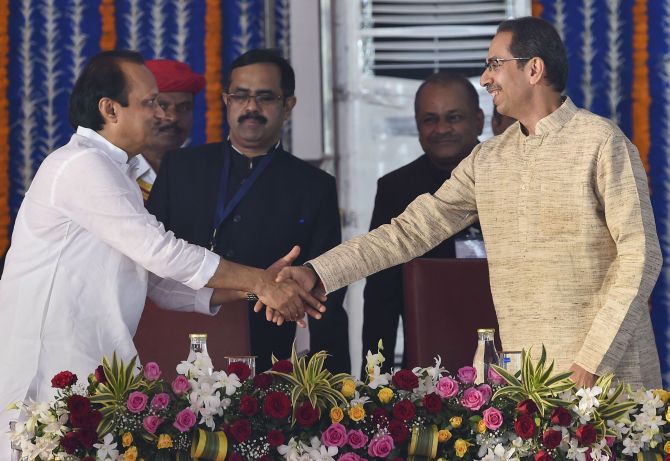 Describing his council of ministers as the 'best team' of experienced leaders who know the 'pulse of people', the CM told reporters in the night that portfolios would be allocated in a 'day or two'.

Earlier in the day, Governor Bhagat Singh Koshyari administered oath to 14 ministers from the NCP, 10 from the Congress and 12 from the Shiv Sena at Vidhan Bhavan (state legislature) premises in south Mumbai. 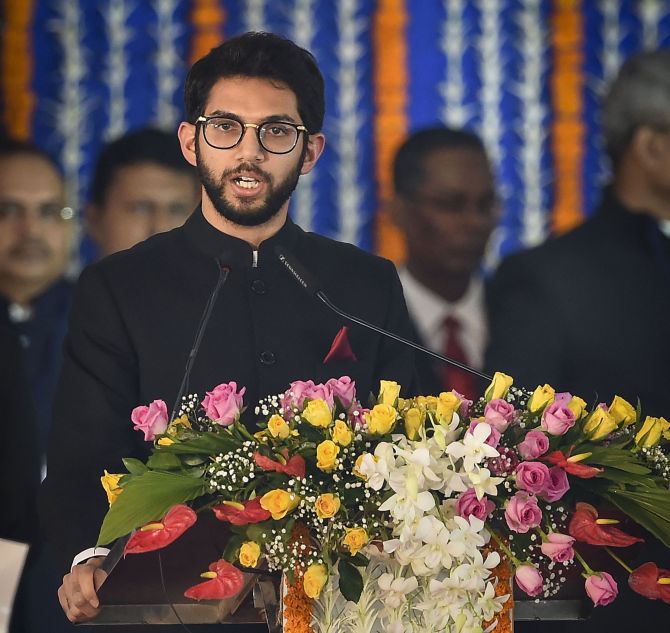 The expansion, which raised the strength of the state ministry to 43, came over a month after the Thackeray-led Maharashtra Vikas Aghadi (MVA) government came to power.

Two members each of the Sena, NCP and the Congress had taken oath on November 28, alongside CM Thackeray.

One of the main takeaways from the expansion exercise was Aaditya Thackeray -- the first-time MLA from the Thackeray clan -- taking oath as Cabinet minister at the age of 29. 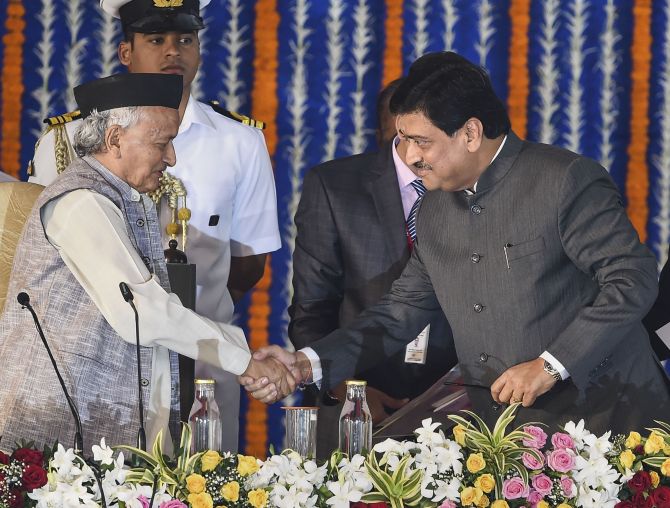 Expectedly, Ajit Pawar made a comeback as deputy chief minister, barely 37 days after he broke ranks with the NCP and joined hands with Devendra Fadnavis of BJP to form a government, which lasted for barely 80 hours. Another senior leader to take oath as a Cabinet minister was former chief minister Ashok Chavan of Congress.

However, another senior Congressman and former CM Prithviraj Chavan did not find place in Thackeray's ministry.

There is a speculation that he may lead the state Congress unit.

Raut's absence was attributed to his brother Sunil Raut, a Sena MLA, not getting a berth. 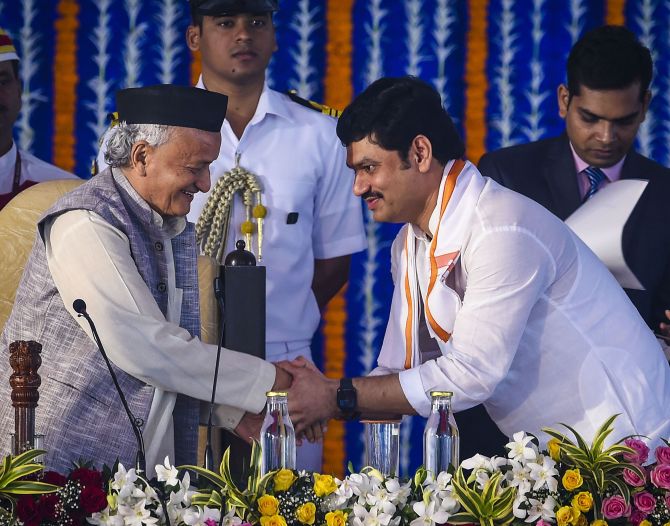 Raut, however, said that his party leaders must stay a little 'patient' as there is not much scope of accommodating them in the Maha Vikas Aghadi government.

"People should understand that we don't have many options since it is a government of three parties. There are capable people in all three parties. Our people must stay a little patient. It is a matter of happiness that Uddhav Thackeray is chief minister," Raut said.

Explaining the reason for giving the event a miss, a BJP leader said, "This government has not fulfilled the expectations of Maharashtra's farmers. We don't feel like attending the ceremony."

Another BJP leader said, "When Uddhav Thackeray was sworn in at Shivaji Park last month, state BJP leaders, including Leader of Opposition in Assembly Devendra Fadnavis, were present.

"There is no need to attend every cabinet expansion ceremony."

Interestingly, the Sena kept its senior leaders Ramdas Kadam and Diwakar Raote, who were ministers in the previous Devendra Fadnavis-led government, out of the new council of ministers.

Instead, it inducted allies including Shankarrao Gadakh of the Krantikari Shetkari Paksh as a Cabinet minister, and Rajendra Patil Yedravkar (Independent) and Bachchu Kadu (Prahar Janshakti Party) as Ministers of State. 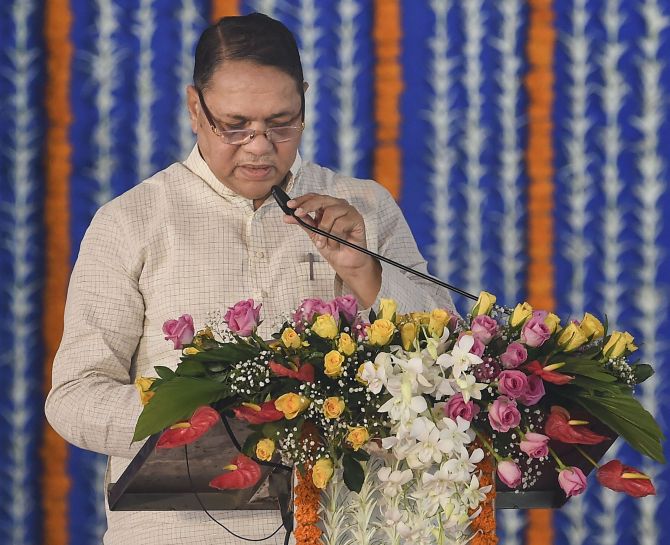 Senior NCP leaders Nawab Malik and Anil Deshmukh, who were ministers in the previous Congress-NCP government, also found place in the new Cabinet.

Chief Minister Uddhav Thackeray and NCP supremo Sharad Pawar were among those present at the swearing-in ceremony.

When Padvi was taking oath as cabinet minister, he added a few lines of gratitude to his voters after reading out the written oath text, which was disapproved by Koshyari who asked the MLA to stop and to 'read out the written text only'.

"This will not do. Take the oath again," the Governor told the veteran MLA.

While leaving the dais, Padvi apologised to the Governor, who gave him a smile of acknowledgement.

Before this, Koshyari intervened when Varsha Gaikwad invoked Dalit icon Dr B R Ambedkar's name while taking the oath of office and secrecy.

The size of council of ministers cannot exceed 15 per cent of the total number of MLAs, which is 288 in the state.

As a result, Maharashtra can have a maximum 43 ministers. 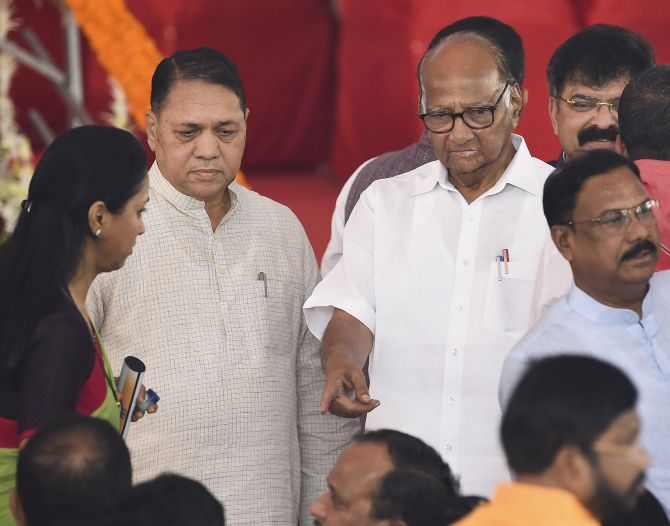 Some political heirs who took oath included NCP MLA Aditi Tatkare, daughter of party MP Sunil Tatkare. She was sworn in as a minister of state (MoS).

Shankarrao Gadakh of KSP, who was inducted as Cabinet minister, is son of former NCP leader Yaswantrao Gadakh.

CM Thackeray later said though his government is made of unlikely allies with different ideologies, all have been elected by the people.

"We are all united for resolving the issues facing the people. We have to work as a family. Even though we have different ideologies, we have to think about the state and its development first," he said.

"I am confident that this best team will win and take the state to new heights of development," he said.

The Shiv Sena last month joined hands with the Congress and NCP, its traditional adversaries, after its alliance with the BJP collapsed over the issue of sharing the chief ministerial post.

On November 28, Balasaheb Thorat and Nitin Raut of Congress, Eknath Shinde and Subhash Desai of the Sena and Jayant Patil and Chhagan Bhujbal of the NCP had taken oath along with Thackeray.

The opposition BJP has 105 MLAs.