Another bid by two women in their forties to trek to the hill shrine of Lord Ayyappa in Sabarimala was foiled on Monday by protesting devotees, a day after a similar effort by a group of 11 women failed. 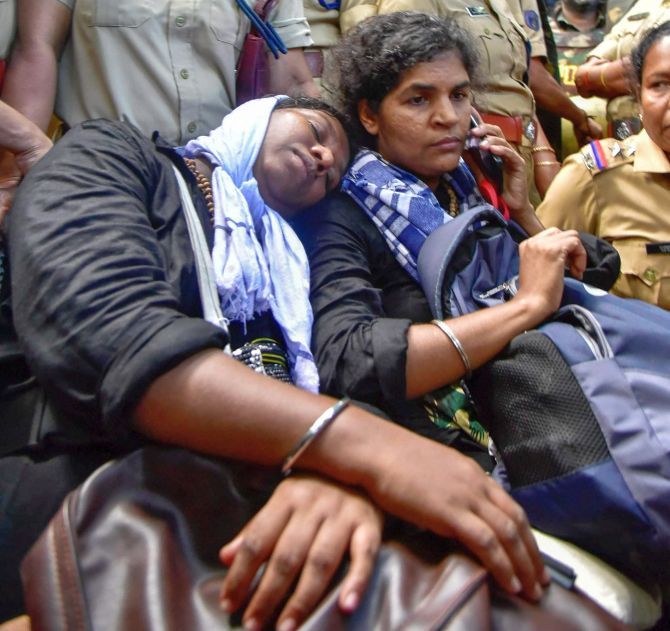 IMAGE: Bindu and Kanakadurga being escorted by the police amid a protest by devotees in Pathanamthitta. Photograph: PTI Photo

The attempt by the two women -- Bindu (42), a Communist Party of India (Marxist–Leninist) activist from Koyilandy in Kozhikode district, and Kanakadurga (44), said to be a civil supplies employee from Angadipuram in Malappuram -- came after 11 women activists of a Chennai-based outfit were prevented from reaching the shrine and chased away by devotees chanting Ayyappa mantras on Sunday.

A case has been registered against 150 people for rioting and causing obstruction, police said.

Though the police at first gave them protection and tried to take them to the temple despite protests, they soon realised that it was dangerous and advised them to abandon their plans.

The two women, who reached Pamba at around 4 am, faced massive protests from devotees at Apachimedu and Marakootam, about 1 km from 'Sannidhanam' (temple complex), as they were being escorted by police.

Ayyappa devotees surged in large numbers to the narrow pathway while the women were being escorted, and there was a minor scuffle with police for over an hour.

Police tried to evict the pilgrims who shouted "go back" and chanted Ayyappa mantras and a tense situation prevailed with the restive devotees showing no signs of backing off.

Seeing the growing number of protesters, including young children, and to prevent the situation from getting out of hand, the women were advised to return by the police.

Though both women, who had trekked about 4.5 km, initially insisted they would offer prayers at the shrine, Kanakadurga complained of uneasiness shortly thereafter and fainted and had to be rushed to Pamba hospital, police said.

Bindu was also taken to the hospital. Both were later shifted to the Kottayam medical college hospital.

A cameraman of a Malayalam TV channel was injured in a the scuffle between media personnel and police when the former tried to talk to the two women when they were being moved to the hospital.

Bindu told reporters that both were fine and there were no health issues and it was only a ploy by police to shift them to the hospital to prevent them from reaching Sannidhanam.

While industries minister E P Jayarajan insisted that the government would not take any stand which will destroy the peace in Sabarimala, Opposition Congress hit out at the Left government, saying it was playing a "double game".

"The protestors are behaving like Taliban militants," Jayarajan said.

"What was witnessed in Sabarimala on Sunday and Monday is a drama, which is an insult to Kerala, police and people of the state," he said.

Senior Congress leader and former chief minister Oommen Chandy said the government's interest was to put up a "women's wall" from Kasaragode to Thiruvananthapuram,

Flood relief and rehabilitation, Sabarimala pilgrimage season are not matters which are of any concern of the government, he told reporters.

Chief Minister Pinarayi Vijayan, earlier this month, had announced that the 'women's wall' would be formed on January 1 from the northern district of Kasaragode to the southern most district of Thiruvananthapuram "to demonstrate the secular and progressive mindset of the state".

BJP state president P S Sreedharan Pillai said the party was waging a Dharma Yudh (religious war) and until the government protects the faith of Hindus, the protests would continue. 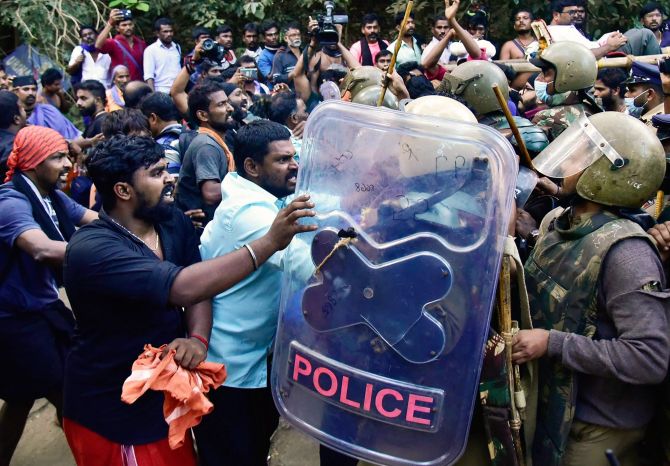 CPI-M veteran V S Achuthanandan wanted the government to arrest those who protested in front of the houses of the two women.

Earlier, Bindu told reporters that the government should implement the September 28 Supreme Court verdict and they be allowed to go to the shrine.

The women said they had not asked for any police protection. "The Supreme Court has given a verdict. So it is the government's duty to help us climb the hills," they said.

Some BJP workers raised slogans at Thiruvanathapuram railway station against three women activists of "Manithi" who were returning to Tamil Nadu this afternoon.

The three had come to Thiruvanathauram reportedly to meet the chief minister, a day after 11-members of the outfit unsuccessfully tried to make it to the Ayyappa shrine Sunday.

However, since Vijayan was away at Kozhikode, the meeting did not take place, official sources said.

Since the top court verdict, no women in the 10-50 age group, who are traditionally barred from entering the shrine, have been able to enter the 'sannidhanam' and offer worship to the presiding deity Lord Ayyappa, who is a "Naishtika Brahmachari" (perennial celibate).

Kerala had witnessed massive protests by devotees opposing the entry of girls and women in the 10-50 age group into the shrine after the CPIM-led Left Democratic Front government decided to implement the apex court verdict allowing all women to offer prayers at the temple.

The Congress-led United Democratic Front and the BJP are opposing the entry of young women, saying they are with the devotees.

Four transgenders recently offered prayers at the temple while the attempt by over a dozen young women have been foiled by protesting devotees so far.

The two-month long pilgrimage season began on November 16 and the first phase will end Thursday.

The shrine has been witnessing heavy rush since the past few days.