After months of high-voltage campaigning in the United States presidential elections, the much-awaited election day is here. IMAGE: To win the presidency, either Donald Trump or Joe Biden must acquire over 50 per cent of the electoral college vote, which are 538 in total. Therefore, each candidate must get a minimum of 270 electoral votes to clinch the presidency. Photograph: Mike Segar/Reuters

Taking place in the shadow of the COVID-19 pandemic, the elections are unlike the previous polls in the US. The polls are being considered as the verdict on Trump's handling of the coronavirus pandemic that has killed over 2.3 lakh people in America.

The coronavirus pandemic has prompted nearly a hundred million voters to cast their ballot early -- either by mail or early in-person -- and not wait for the election day. More than 94 million Americans had already cast their ballots by Monday, a record for early voting.

To win the presidency, either Trump or Biden must acquire over 50 per cent of the electoral college vote, which are 538 in total. Therefore, each candidate must get a minimum of 270 electoral votes to clinch the presidency. But leading in polls does not guarantee, the victory. Hillary Clinton also had a clear lead over Trump in the polls for almost the entire 2016 campaign. She ended up losing in the electoral college.

While the timings for opening and closing of polling stations vary in different states and cities, most polls would begin around 6 am (4:30 pm IST) on November 3. IMAGE: Maryland election judge Cassandra Campbell places ballots from voters in their cars into a curbside ballot drop box to prevent the spread of coronavirus disease as other voters stand in a long line waiting to cast their votes in College Park, Maryland. Photograph: Jim Bourg/Reuters

According to New York Times, the closing times of polling stations in Kentucky and Indiana would be 6 pm (4:30 am IST), the polls in Florida will close at 7 pm (5:30 am IST), Pennsylvania and Michigan will close their polls at 8 pm (6:30 am IST), and finally, the polls in Wisconsin and Arizona will be closed at 9 pm (7:30 am IST).

Each state in the US will begin to certify the results of ballots from November 10, which can be delayed. Each state, except California, has to complete the process of certification by December 8. IMAGE: A voter fills out her ballot on the last day of early voting at the Lansing City Clerk's office in Lansing, Michigan. Photograph: John Moore/Getty Images

Biden, the Democratic Presidential nominee, with his running mate Kamala Harris has vowed to "restore the soul of America" which has been battered and divided under President Trump's rule. The election, he said, is nothing short of a "battle for the country's soul".

In his re-election bid, President Trump has been focusing on his stewardship of the economy, promising a rapid coronavirus vaccine, and employing tough rhetoric on immigration and social unrest.

Delivering his closing message on the last day of the campaign, Biden repeated his campaign message that the election was a "battle for the soul of the nation". 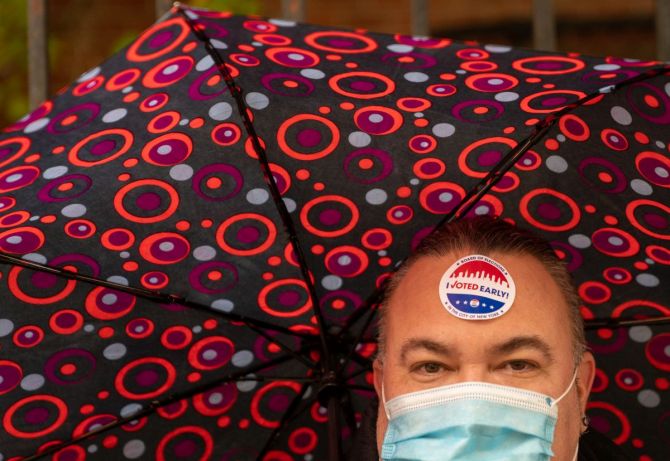 IMAGE: A person carries an umbrella and wears a mask at a polling station in Hunter-Bellevue School of Nursing in New York City. Shortly after polls opened on the last day of early voting in New York City the Board of Elections tweeted they crossed the one million vote threshold. Photograph: David Dee Delgado/Getty Images

"The character of America is literally on the ballot," he said at a drive-in rally in Cleveland, Ohio. "It's time to take back our democracy."

On his final campaign stop, Trump has sought to portray his opponent's future response to the coronavirus pandemic as a dystopian lockdown that would stifle economic and social life.

"The Biden plan will turn America into a prison state locking you down while letting the far-left rioters roam free to loot and burn," he told a rally in Iowa.