US President Donald Trump on Friday hailed the start of “a very great relationship” with Xi Jinping as he welcomed his Chinese counterpart for their first meeting amid bilateral tensions over issues like trade disputes and North Korea’s nuclear ambitions. The meeting between the leaders of the world’s two largest economies was overshadowed by a rapidly escalating crisis in Syria after Trump ordered cruise missile strikes in response to the deadly chemical attack on the town of Khan Sheikhun.

According to officials, Trump informed Xi personally about the Syria strike.

At a brief media appearance with Xi at his Florida resort of Mar-a-Lago, Trump said, “It is a great honour to have the president of China and his incredibly talented wife, a great, great celebrity in China, a great singer. It’s an honour to have you in the United States.”

The two leaders had a smile on their faces as they shook hands during their first face-to-face encounter. IMAGE: US President Donald Trump talks with Chinese President Xi Jinping as Xi arrives for dinner at the start of their summit. Photograph: Carlos Barria/Reuters

“We had a long discussion already. So far, I have gotten nothing. Absolutely nothing. But we have developed a friendship. I can see that. I think, long-term, we are going to have a very, very great relationship and I look very much forward to it,” Trump, 70, said as he hosted the 63-year-old Chinese Communist party leader and his spouse for a dinner.

During his two-day stay, Xi will exchange views with Trump on bilateral ties and major regional and global issues of common concern, China’s official media said.

Trump accepted an invitation Xi to pay a state visit to China in 2017, it said. 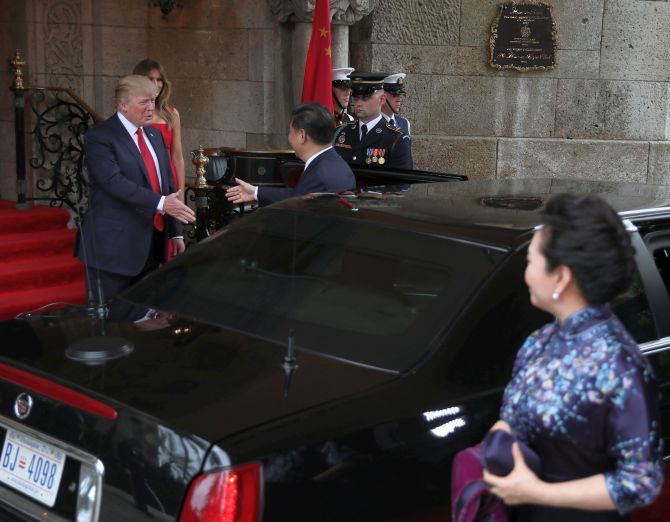 IMAGE: The US president had said before his meeting with Jinping that this would be a difficult meet for him. Photograph: Carlos Barria/Reuters

Both the leaders were wearing dark suits, with Trump donning a red tie, and Xi wearing a blue one. US First Lady Melania Trump wore a red dress; while the Chinese first lady was dressed in a bluish, pattern dress.

The dinner included steak and potatoes. Among the desserts were chocolate cakes with vanilla sauce and dark chocolate sorbet or a sorbet trio. IMAGE: The four of them enjoyed a delicious meal at Trump's Florida resort. Photograph: Carlos Barria/Reuters

Before the summit, trade disputes and North Korea’s nuclear and missile programme were tipped to top the list of discussions between Trump and Xi.

Despite his tough campaign talk, Trump has so far not followed through on his threat to formally brand China a “currency manipulator”, nor to hit Chinese imports with punitive tariffs.

When Xi came to the US two years ago, Trump attacked the former president Barack Obama’s red-carpet welcome, claiming he would have offered a Big Mac rather than a state dinner to a leader whose country he has accused of “raping” the American economy.

One of the most urgent issues for the US is North Korea, which on Wednesday fired a ballistic missile into the Sea of Japan.

Trump and Xi are also scheduled to sit down together again for a working lunch. IMAGE: "So far, I have gotten nothing. Absolutely nothing. But we have developed a friendship. I can see that. I think, long-term, we are going to have a very, very great relationship and I look very much forward to it,” Trump said. Photograph: Carlos Barria/Reuters

Trump outraged China in December when he took the unorthodox step of accepting a phone call from the Taiwanese president.

But the US president later agreed to respect the “One China” policy in a telephone call with President Xi in February.

Since establishing diplomatic relations in 1979, the two countries have witnessed twists and turns in their relationship, but have nonetheless become highly interdependent with their interests getting increasingly intertwined, China’s state-run news agency Xinhua said.

China is now the largest trading partner of the United States. Last year, two-way trade reached $519.6 billion, compared to $2.5 billion in 1979. Bilateral trade and investment supported some 2.6 million jobs in the United States across a range of industries in 2015, while Chinese products also help lower costs for US consumers, it said.