The United States and the Afghan Taliban have resumed peace talks, President Donald Trump has revealed as he made his first visit to the war-torn country on an unannounced trip to meet American soldiers for the Thanksgiving holiday. 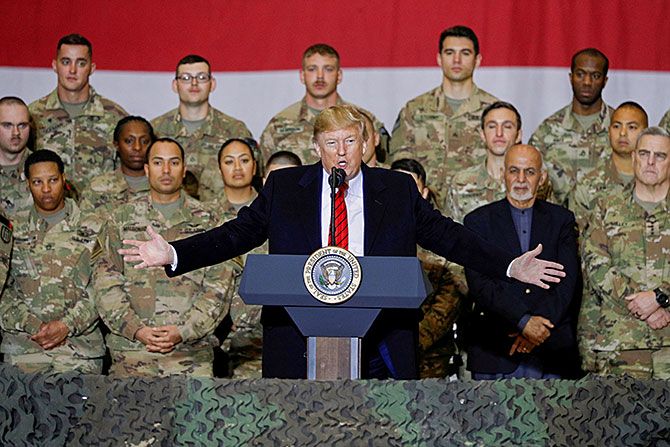 IMAGE: US President Donald Trump delivers remarks to troops, with Afghanistan President Ashraf Ghani standing behind him, during an unannounced visit to Bagram Air Base, Afghanistan. Photograph: Tom Brenner/Reuters

During the brief appearance at the sprawling Bagram Airfield, Trump served turkey to soldiers, posed for photographs and met Afghan President Ashraf Ghani.

After nine rounds of negotiations with the Taliban, President Trump abruptly cancelled peace talks in September after a US soldier was killed in a suicide attack in Afghanistan's capital, Kabul.

The secretive visit to Afghanistan on Thursday for Thanksgiving came a week after a prisoner swap with the Taliban aimed at resuming peace negotiations to end the 18-year-long war. 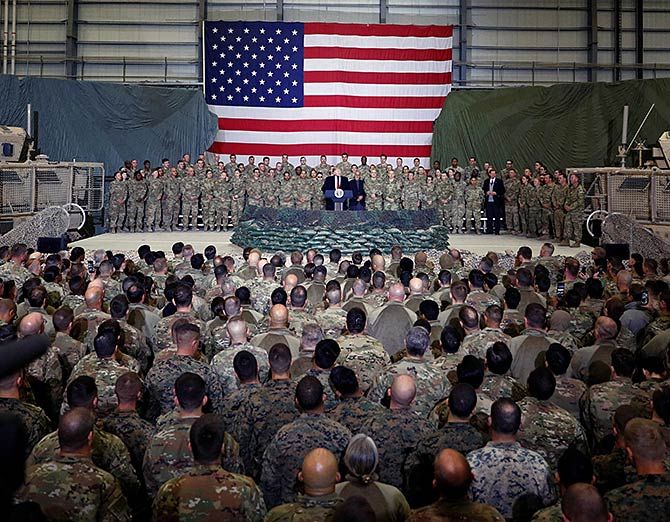 As part of the swap deal, the Taliban freed two Western academics who had been held hostage since 2016 -- American Kevin King and Australian Timothy Weeks -- in exchange for three imprisoned senior militants.

"Yes," Trump told a small group of reporters at the Bagram Air Field when asked to confirm whether the US had restarted discussions with the Taliban after calling the peace talks "dead".

Trump said the terms of the deal would have to include a Taliban ceasefire. 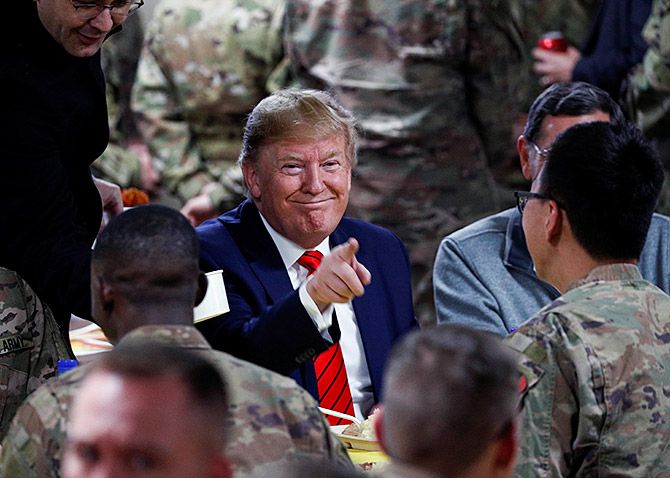 Afghan officials have long demanded a ceasefire but the Taliban, who now control more territory than at any point since they were ousted in 2001, have refused to hold direct talks with the government until a US deal is agreed.

Trump said the US had made tremendous progress over the past six months and had been drawing down its troops at the same time.

"We're going to stay until such time as we have a deal or we have total victory and they (Taliban) want to make a deal very badly," he told reporters during a hastily-arranged bilateral meeting with Afghan President Ghani at the air field, the largest US base in Afghanistan. 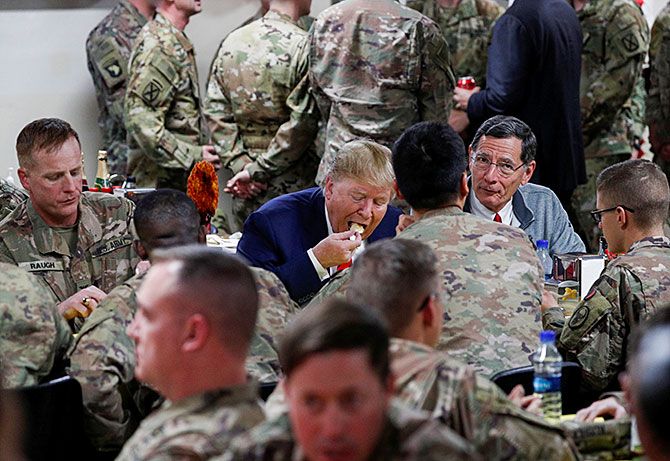 Trump confirmed that he hoped to reduce the number of American troops in Afghanistan to 8,600, but did not give any timeline.

The US currently has less than 14,000 troops in Afghanistan, but military officials would not confirm the exact number.

Earlier, in his address to the American troops, Trump said the war in Afghanistan would not be decided on the battlefield and, ultimately, there needs to be a political solution that he said would be decided by the people of the region.

The president referred to his September announcement to abruptly withdraw from peace talks after the Taliban killed a US soldier.

"They (Taliban) thought that was good negotiating power," Trump said.

"That's bad negotiating power and since then we've hit them so hard." 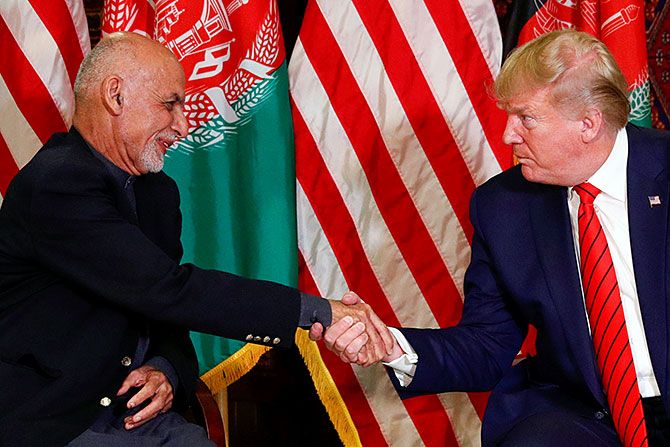 Reacting to Trump's statement, the Taliban said it was ‘way too early’ to speak of resuming direct talks with the US.

"It is way too early to talk about the resumption of talks for now. We will give our official reaction later," the Islamist group's official spokesman, Zabihullah Mujahid, told AFP.

Afghan President Ghani thanked the American troops who have made the ‘ultimate sacrifice’ in Afghanistan and noted that the US casualties in Afghanistan were way down under Trump's presidency.

‘Afghan security forces are taking the lead now,’ Ghani said. ‘In the next three months, it's going to be all Afghanistan!’ 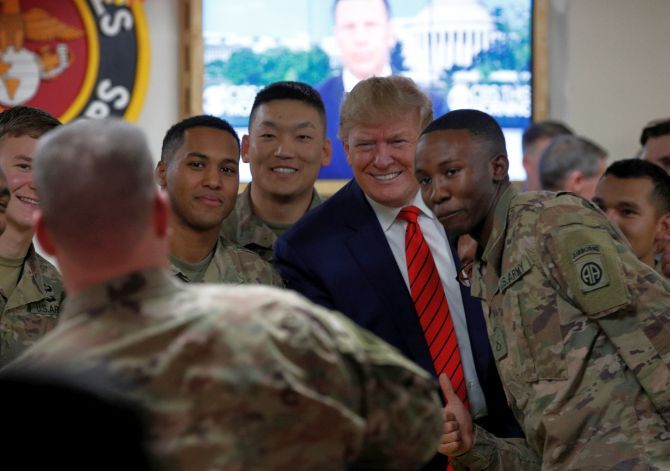 IMAGE: Trump poses for a photo with with US troops. Photograph: Tom Brenner/Reuters

Meanwhile, CNN reported that White House officials and reporters were stripped of their mobile phones and other electronic devices before Trump's Air Force One aircraft took-off.

Reporters on board the plane did not find out where they were heading until about two hours before touching down in Afghanistan.

Reporters were not allowed to report on Trump's visit until minutes before boarding the plane again to return to the US.

"It's a dangerous area and he wants to support the troops," White House press secretary Stephanie Grisham explained aboard Air Force One as she briefed reporters on the President's destination.

"He and Mrs. Trump recognise that there's a lot of people far away from their families during the holidays and we thought it'd be a nice surprise," Grisham said.

Only a handful of aides accompanied the president on his secretive trip to Afghanistan. Those on Air Force One included acting White House chief of staff Mick Mulvaney, National Security Adviser Robert O'Brien and Grisham. Senator John Barrasso, a Wyoming Republican, also joined Trump for the trip.

As Trump stepped off the plane at the air base in Afghanistan, he was greeted by the Chairman of the Joint Chiefs of Staff, Gen. Mark Milley. 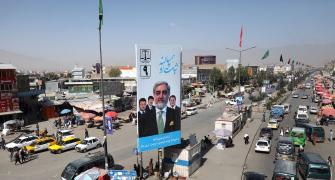 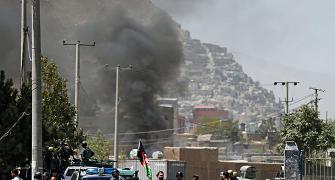 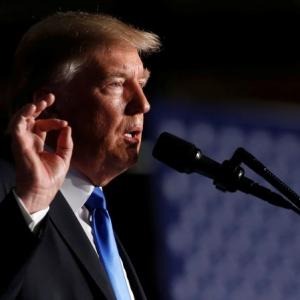