Days after Delhi University’s Ramjas college saw violent clashes, a Lady Sri Ram College student who is a Kargil martyr’s daughter has initiated a social media campaign, “I am not scared of Akhil Bharatiya Vidyarthi Parishad”, which has gone viral. 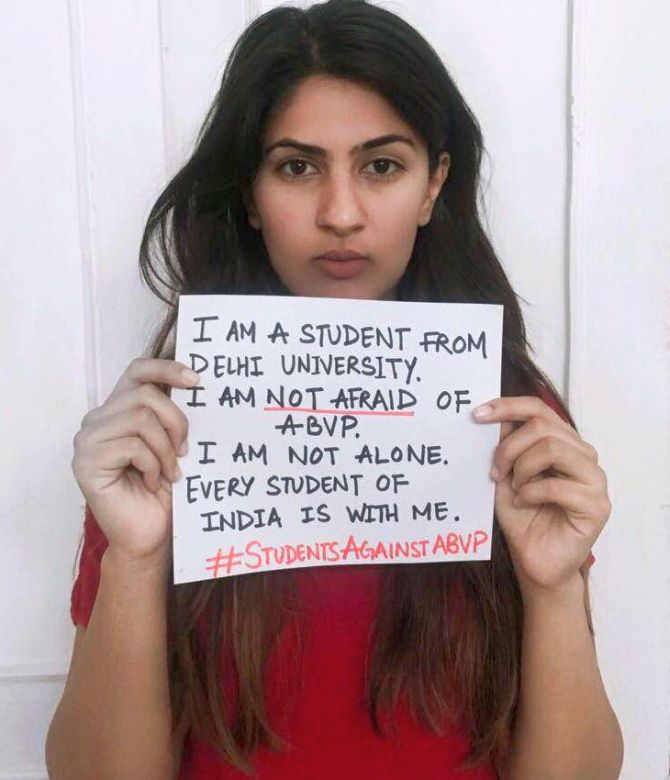 Gurmehar Kaur, daughter of Kargil martyr Captain Mandeep Singh, changed her Facebook profile picture holding a placard which read “I am a student from Delhi University. I am not afraid of ABVP. I am not alone. Every student of India is with me. #StudentsAgainstABVP”.

“The brutal attack on innocent students by ABVP is very disturbing and should be stopped. It was not an attack on protesters, but an attack on every notion of democracy that is held dear in every Indian’s heart. It is an attack on ideals, morals, freedom and rights of every person born to this nation,” she said in a Facebook status. 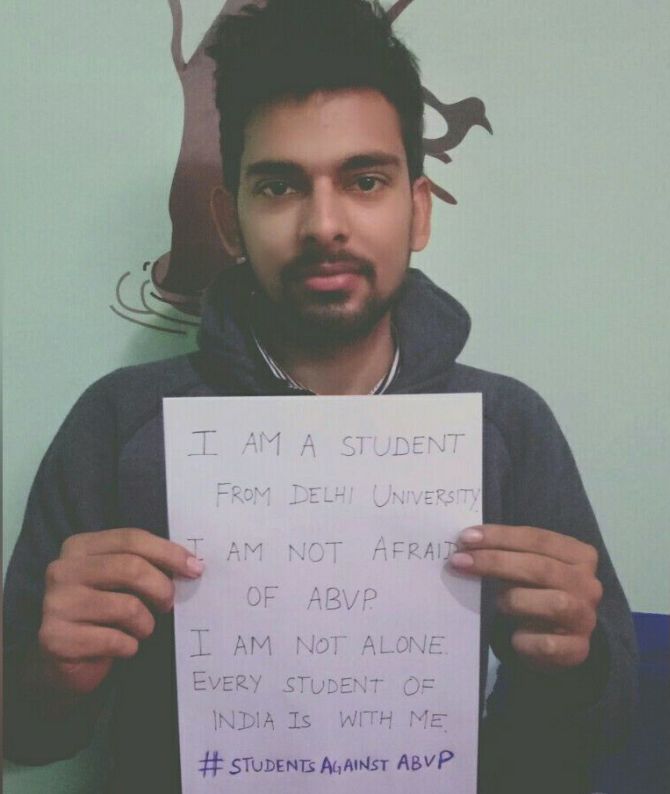 IMAGE: A student of DU, Shubham Tomar, joins in the protest. Kaur on her Facebook had written, "The stones that you pelt hit our bodies, but fail to bruise our ideas. This profile picture is my way of protesting against the tyranny of fear." Photograph: Facebook

“The stones that you pelt hit our bodies, but fail to bruise our ideas. This profile picture is my way of protesting against the tyranny of fear,” she added.

The literature student’s classmates and peers started sharing the post, prompting students from various universities across the country to change their profile pictures with the same placard, as the initiative went viral. 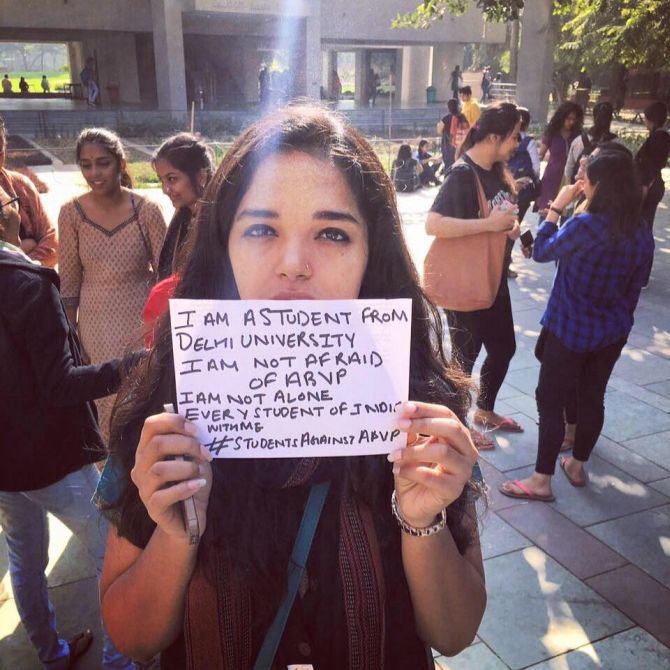 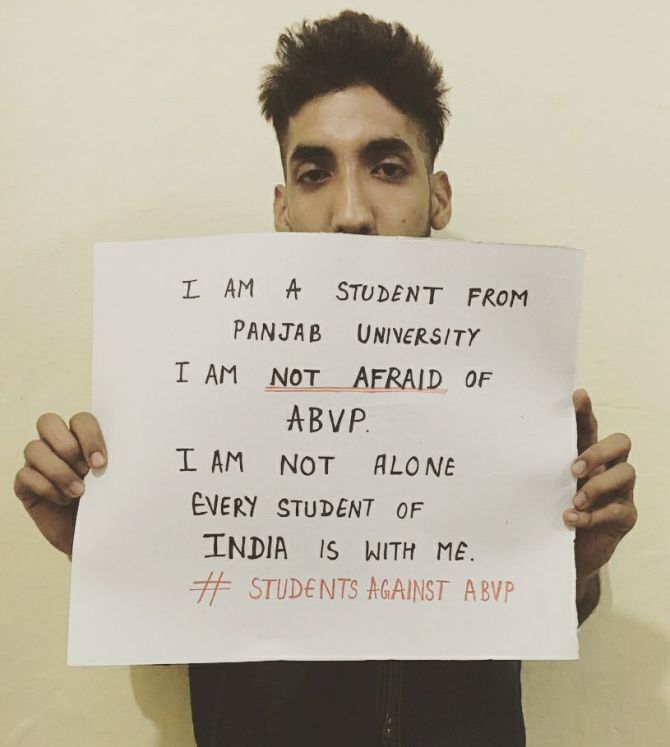 The genesis of the clash was an invite to Jawaharlal Nehru University students Umar Khalid and Shehla Rashid to address a seminar on ‘Culture of Protests’ which was withdrawn by the college authorities following opposition by the Rashtriya Swayamsevak Sangh student wing. 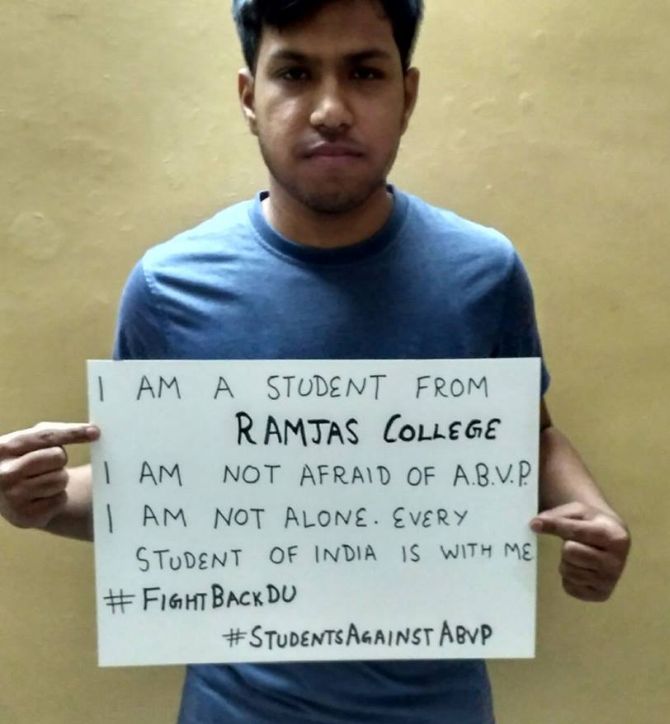 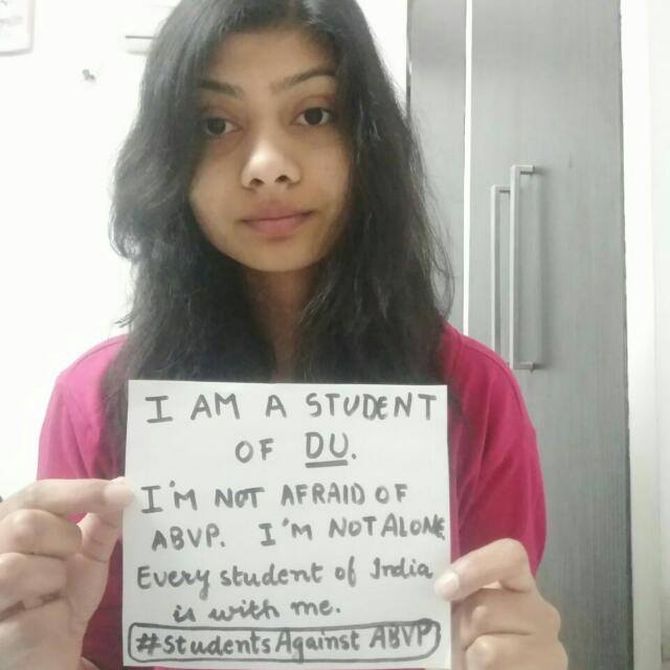 IMAGE: Students all over the country, not only Delhi, have begun posting the image as their way of protesting against the ABVP. 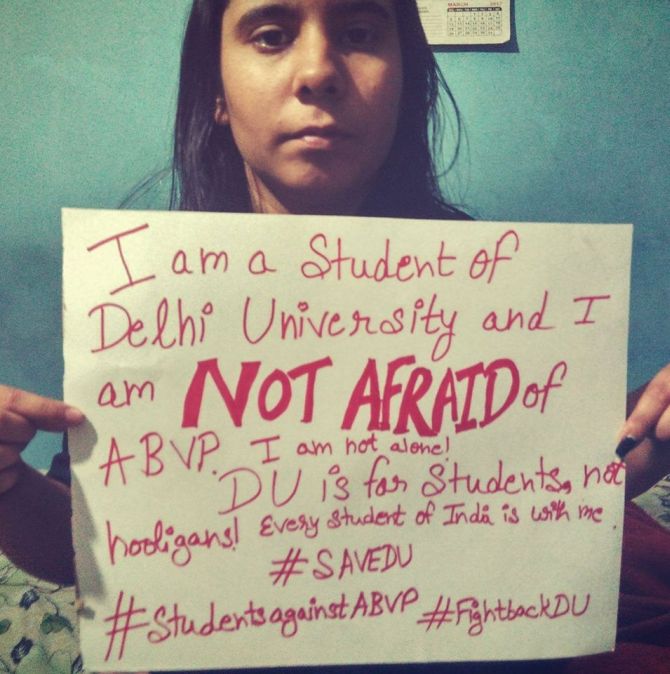 READ: The Kargil martyr's daughter who wants peace with Pakistan

Source: PTI© Copyright 2020 PTI. All rights reserved. Republication or redistribution of PTI content, including by framing or similar means, is expressly prohibited without the prior written consent.
Related News: ABVP, Delhi University, FB, Pakistan
SHARE THIS STORY
Print this article 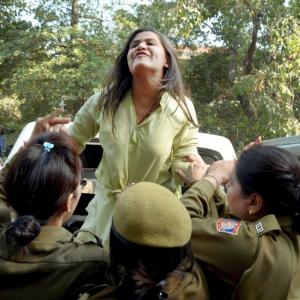