Thousands in Houston march to pay tribute to George Floyd

Tens of thousands of people marched peacefully through the streets of downtown Houston, wearing masks and chanting 'Black Lives Matter', to pay tribute to 46-year-old African-American George Floyd, whose death in police custody in Minneapolis triggered violent protests across the United States. 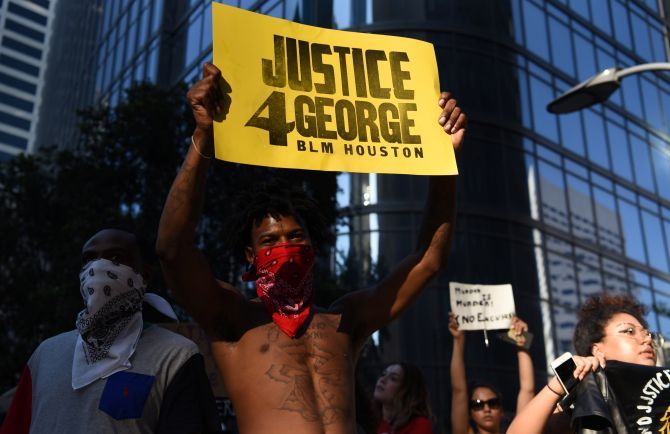 IMAGE: Protesters march at a rally against the death in Minneapolis police custody of George Floyd, in Houston, Texas. Photograph: Callaghan O'Hare/Reuters

The protests across the country led to the death of at least five persons, arrest of over 4,000 people and damage to property worth billions of dollars.

Chanting "hands up, don't shoot" and "no justice, no peace", the crowd, estimated to be over 60,000, along with 16 members of Floyd's family, some of whom flew down to Houston, marched about a mile from Discovery Green Park to City Hall under the scorching sun.

Lakewood Church Pastor Joel Osteen led a prayer with Floyd's family members, with the crowd later getting down on one knee and observing silence for 30 seconds in the memory of the Houston man. IMAGE: Protesters raise their hands in solidarity as they rally against the death in Minneapolis police custody of George Floyd, in downtown Houston, Texas. Photograph: Adrees Latif/Reuters

"Never did I think we would have this many people for my brother," said Floyd's sibling, while a nephew of his said, "don't stop until we get justice for my uncle."

Rapper Bun B led the chanting crowd. He said "What's his name?" and the crowd replied, "George Floyd." "That's right and do not you ever forget it," Bun B said.

Reverend Bill Lawson, who had marched with Dr Martin Luther King, addressed the marchers and said "(the crowd) needs to make noise". "We have been quiet for too long," he said. 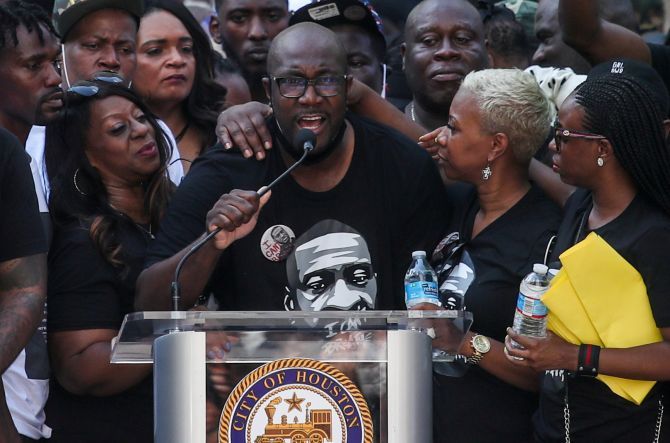 IMAGE: Philonise Floyd, brother of George Floyd, who died in Minneapolis police custody, is surrounded by family members as he speaks at a protest rally against his brother’s death, in Houston, Texas. Photograph: Adrees Latif/Reuters

Mayor Turner said that as "we protest and demonstrate, we do it in such a way that we do not deface George Floyd's name".

"This day is not about City Hall. This is your city. Today is about the family of George Floyd," Turner said.

"We want them to know that George did not die in vain," the mayor said addressing the rally.

"Let me say to his family, as the mayor of the fourth largest city, that we are with you in the years to come. George Floyd did not die in vain. We are not perfect. We recognise that. In our city, we respect every person, every person is important, every neighbourhood is of value. We have to commit ourselves to doing better every day," Turner said. 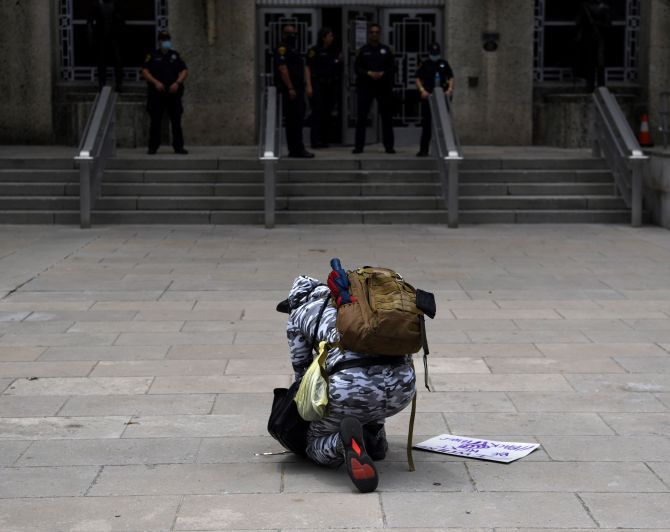 IMAGE: A lone protester kneels in front of City Hall after protests against the death in Minneapolis police custody of George Floyd cease in Houston, Texas. Photograph: Callaghan O'Hare/Reuters

Congresswoman Lee said, "I want us to know the pain of these loved ones... some of whom I've had police officers tell me what an inspiration George Floyd was. You are this nation. And I've come here to take your nation (back)".

It is time a for a revolution of change, she said.

Congressman Green said he is angry because not only do "we want an arrest, we want a conviction." 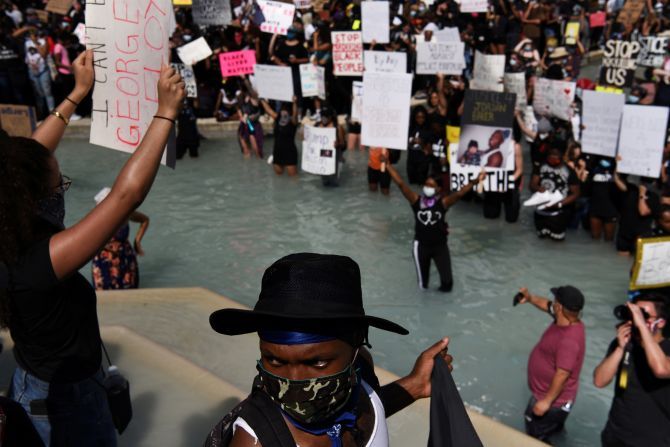 IMAGE: Protesters hold signs while standing in a pool outside city hall, as they rally against the death in Minneapolis police custody of George Floyd in Houston, Texas. Photograph: Sergio Flores/Getty Images

It is time to declare a war on racism in the United States, he said, adding that US President Donald Trump should have been impeached for his racism.

Before the event, officials urged those marching to have their voices heard, while demonstrating peacefully. Violence was discouraged. 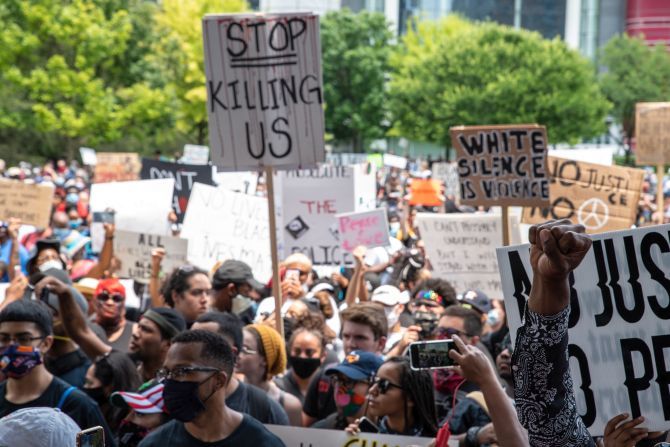 IMAGE: Attendees hold up signs during a march in honour of George Floyd in Houston, Texas. Photograph: Callaghan O'Hare/Reuters

Shortly before the start of the march, the City of Houston in an alert asked the public to report any suspicious behaviour.

Houston Public Works crews have removed several piles of bricks and rocks from locations around the city, officials said.

Former US president George W Bush has called upon Americans to examine the nation's "tragic failures" and collectively push for equal justice, amid violent protests across the country over the custodial killing of an African-American man.

George Bush said he and his wife, Laura, were "disturbed by the injustice and fear that suffocate our country".

The Bushes said in a statement on Tuesday that they did not feel like it was their time to speak out, but rather it was time for them to listen.

George Bush and Laura Bush said they believe that peaceful marches are good for the country.

"It remains a shocking failure that many African-Americans, especially young African-American men, are harassed and threatened in their own country," the statement read.

"Laura and I are anguished by the brutal suffocation of George Floyd and disturbed by the injustice and fear that suffocate our country. Yet we have resisted the urge to speak out, because this is not the time for us to lecture. It is time for us to listen," George Bush said.

"It is time for America to examine our tragic failures -- and as we do, we will also see some of our redeeming strengths. It remains a shocking failure that many African Americans, especially young African American men, are harassed and threatened in their own country. It is a strength when protesters, protected by responsible law enforcement, march for a better future," he said.

"This tragedy, in a long series of similar tragedies, raises a long overdue question of 'how do we end systemic racism in our society?'" George Bush asked.

Seema Hakhu Kachru
© Copyright 2020 PTI. All rights reserved. Republication or redistribution of PTI content, including by framing or similar means, is expressly prohibited without the prior written consent.