This Ramzan, poor Muslims struggle for food in lockdown

The month of Ramzan has come as a boon, says Shabana. Not because it's a holy month or because it leads up to Eid but because her children don't ask her for three meals a day when they are fasting. 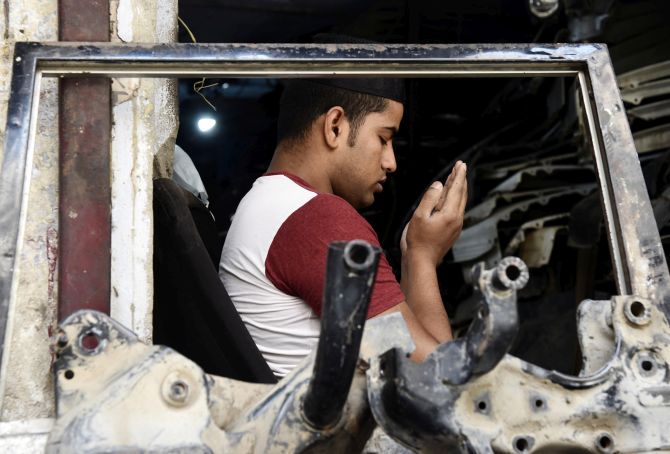 IMAGE: A man offering prayer at his shop on the last Friday of Ramzan during the ongoing lockdown, in Delhi. Photograph: ANI Photo

The distraught mother, a part-time domestic worker in south Delhi, echoes thousands of devout Muslims scrambling to feed their families in an extended lockdown that has rendered them jobless
and on the verge of penury.

A large number of daily wage workers, including rickshaw pullers and construction labourers, and their families depend on neighbourhood mosques for their two main meals during Ramzan – sehri, the pre-dawn meal at the beginning of a day of fasting, and iftaar, at the end of day.

But with mosques shut, they are left to fend for themselves, underscoring once again the magnitude of the crisis of unemployment and poverty triggered by the lockdown, which began on March 25 to stem the spread of the coronavirus.

Many continued to fast through Ramzan, which is nearing its end, hoping their prayers will help them pull through difficult times and looking at the fasting month as a blessing in disguise as they don't have to arrange for three meals a day.

"Ramzan is a boon in such difficult times as my children fast and don't ask for three meals in a day," said 28-year-old Shabana, who goes by only one name.

Her husband is stranded in Jharkhand and she lives in the Johri Farm locality in Okhla with her out-of-work brother and two children -- a 12-year-old son and a 10-year-old daughter.

"I was employed in three homes, but my employers asked me not to come once the lockdown began. Only one of them has paid me for these last two months when I was not working," she said.

"At least, during Ramzan, I just have to arrange for two meals. For sehri, we just make do with tea. And for iftaar, we manage with whatever little food we can arrange,” she added.

"I can't bear to see my children's faces when they go out during iftaar time and return dejected seeing others buying delicious food which we can't afford," she said. 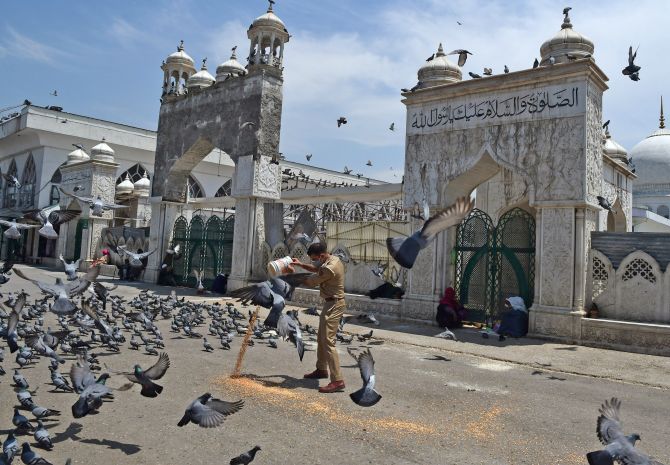 IMAGE: Police personnel feeds pigeons outside Hazratbal Muslim shrine which is closed due to the lockdown in Srinagar. Photograph: ANI Photo

Shabana is not alone in her misery.

Sitara, a 40-year-old out-of-work domestic help in Noor Nagar, said all her four children fast during Ramzan. If Shabana and her family manage with tea during sehri, her children and she just drink water.

Iftaar is also about just making do.

"Earlier, during Ramzan, my children would go for evening (Maghrib) prayers and have iftaar at the mosque. But with mosques closed, there is just dal-roti or potato for iftaar," she said.

Sitara said some of her previous employers have contacted her to get back to work but it will take some time as she injured her leg while rushing for free 'puri-aaloo' being distributed in her neighbourhood.

The closing of mosques has not only hit the community iftaar made available with the people in the neighbourhood sending food contributions, but also made it difficult for charity organisations to reach out to the poor to help them in these difficult times.

Maulana Arshad Madani, president of the prominent Muslim organisation Jamiat Ulema-e-Hind, said his organisation has activated the vast network of madrassas in the country and is reaching out to homes with food and financial help through them.

"People from all classes, including daily wagers and the poor, would have iftaar in mosques. But they are closed this Ramzan and a major challenge has been to identify and reach out to people those in need," he said.

"We have reached out to many providing financial assistance as well as food for iftaar and sehri, but obviously, many would have been left out. With so many losing their livelihood during lockdown, they would be suffering untold hardships," Madani said. 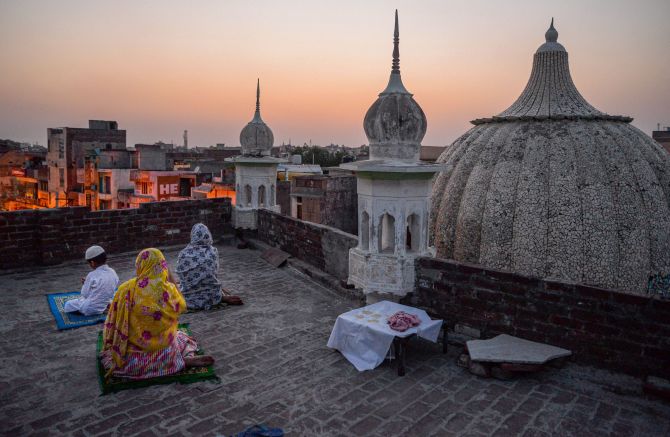 IMAGE: Muslims offer prayers from the roof of their house on the last friday before Eid, during the ongoing COVID-19 nationwide lockdown, in Jalandhar. Photograph: PTI Photo

The stories of hardship are many and distressing.

Like that of 13-year-old Rehan, a vegetable seller, who keeps ‘rozas' (the Ramzan dawn to dusk fast) not knowing whether he will manage a proper iftaar or have to manage by eating the tomatoes he has been selling all day.

Pushing his vegetable cart with one hand and holding his physically disabled younger brother Ayaan's hand with the other, the teen sells tomatoes in the bylanes of Okhla Vihar and nearby Noor Nagar.

"I am the sole bread earner of my family as my father passed away and I live with my mother, two sisters and my brother. Earlier, my brother and I used to have iftaar at mosques but that is not an option this time," he said.

"Sometimes, the houses where we are selling vegetables offer us iftaar meals, but mostly we just eat some of the tomatoes we are selling," he said with a wry smile on his face, sounding wiser
beyond his years.

Mohammad Shaukat, an out-of-work carpenter who stays with his wife, four children and mother in an Okhla Vihar shack, has borrowed Rs 2,000 from a money lender so the sehri and iftaar meals can be managed.

Recounting the travails of the family, his mother Khairunissa, who washed utensils for a living, said her son lost his job and so did she as several housing societies banned the entry of house maids amid the coronavirus outbreak.

"I make iftaari from whatever is available as the borrowed money is also running out fast. We just pray for Allah to bail us out in this time… our fasting will bear fruit. We stay alive on this hope," she said tearfully.

Yasmeen Bano, her next door neighbour, has also borrowed money.

"I have borrowed Rs 1,000 as there were no rations in the house and my four daughters were hungry. They are too small to fast, but I keep all the rozas. I just eat the iftaar meal in a day and save the rest for my children. We live by the day. I don't know whether I will have food tomorrow or not," she said.

Ramzan is the ninth month of the Islamic calendar during which Muslims refrain from eating and drinking from dawn to dusk and end their fast in the evening.

The month is in its fourth week now and Eid will be celebrated on May 24 or 25, depending on the sighting of the moon.