These 'clownselors' heal patients one smile at a time

Volunteers dressed as clowns visit hospitals and old-age homes to spread cheer and dispel the gloom of ill health and old age. 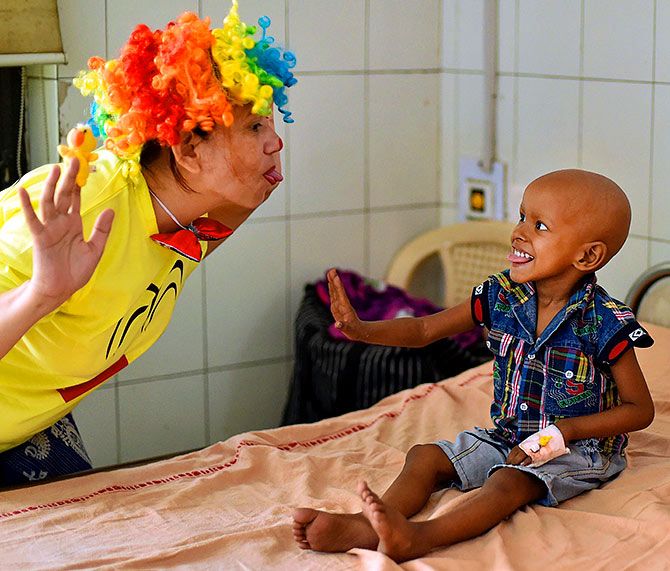 IMAGE: A clownselor entertains a child-patient at the cancer ward of the Chacha Nehru Bal Chikitsalaya in New Delhi. Photograph: Ravi Choudhary/PTI Photo

Replacing the big top for a hospital ward, men and women of varying ages clown around, dressed in colourful frills and ruffles, coloured wigs and red noses, dancing and prancing as they look for smiles in the aisles.

They are the Clownselors, a group of volunteers who are out to tell us that clowning around can be more than just fun. It can also be therapeutic, helping the  young and old deal with the stresses and pain of their illnesses.

They are part of the increasing trend of 'clown carers' in cities such as Delhi and Bengaluru who spread cheer and dispel the gloom of ill health and old age.

Every weekend, the Delhi-based Clownselors heads to a hospital, old age home or medical centre to perk up the place with their antics.

On a recent Saturday, the Clownselors were at the cancer ward of the Chacha Nehru Bal Chikitsalaya. As they danced, made faces, fell over each other and performed various other antics, 14-month-old Shivam Pandey's big round eyes followed one clown with a red nose, pink wig and a sock puppet in her hand.

"We have been here for the last five months and they come every Saturday. The mood of the entire ward changes when they are here. It also distracts from the depressing environment," said Shivam's mother Seemla, adding that it helps her de-stress as well.

"The entire mood of the place changes. Everyone gets cheerful, the children, their parents, even the staff. Children forget the pain of the surgery and start playing with them. Parents also feel relieved," said Dr Mamta Sengar, professor, paediatric surgery at the Chikitsalaya. IMAGE: Clownselors, a group of volunteer clowns, visit the cancer ward of the Chacha Nehru Bal Chikitsalaya in New Delhi. the founder of Clownselors said it all started in 2016 when she saw medical clowns in Baroda. The wish to be a reason for someone else's smile took root and inspired her to take on the persona of a clown. Photograph: Ravi Choudhary/PTI Photo

Assessing the impact of the Clownselors, she said children don't usually come for follow-ups but everything feels better and more positive when the clowns are in the room.

Sheetal Agarwal, the founder of Clownselors, said it all started in 2016 when she saw medical clowns in Baroda. The wish to be a reason for someone else's smile took root and inspired her to take on the persona of a clown.

"The term medical clowns got stuck in my head, I had grown up watching a lot of circus, so I knew about circus clowns but had never heard of medical clowns. So I came back, saw a few videos, and also the Robin Williams' movie 'Patch Adams',” she said.

The Hollywood film, which also inspired Rajkumar Hirani's "Munna Bhai MBBS", is based on the life story of American doctor-comedian Patch Adams, arguably the first person to have come up with the alternative treatment model of clown therapy, or clown care. 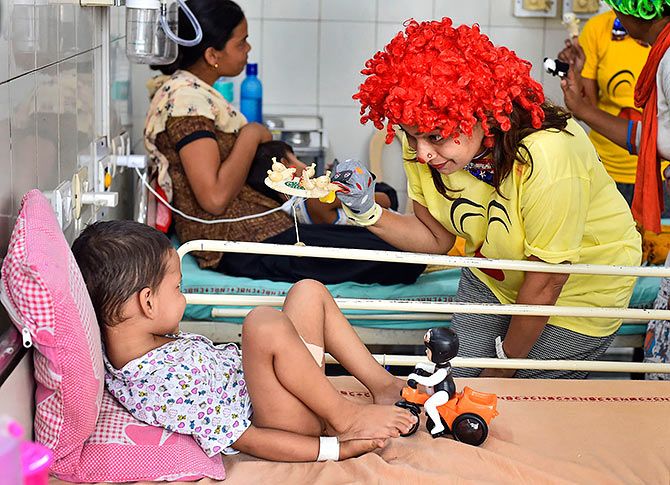 IMAGE: Clownselors is a mix of housewives, businesspersons, and students who visit old-age homes and hospitals, cheering the sick and the aged. Photograph: Ravi Choudhary/PTI Photo

According to Nimesh Desai, director of the Institute of Human Behaviour and Allied Sciences, clown therapy is essentially the sum of "drama therapy and humour" and it should be welcomed as an additional method of treatment.

"Basically, any alternative and additional methods of treatment are in principle welcome... By themselves alone or in conjunction with professional treatment they can be helpful, there is no doubt.

"It is well known that humour helps biological systems and immune responses... There is evidence that humour and laughter therapy can affect both internal and external aspects, biological as well as psychological," the psychologist said.

This is demonstrated when Agarwal and her six volunteer clowns, a mix of housewives, businesspersons, and students, enter the room. When they exit after their performance, they leave behind smiling faces and diminished stress levels. 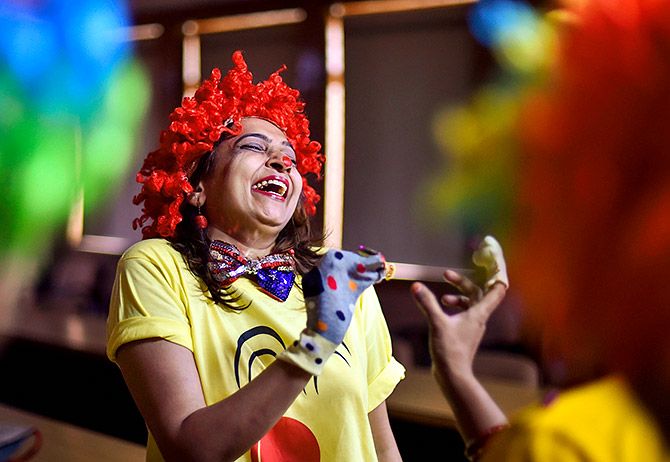 IMAGE: According to Nimesh Desai, director of the Institute of Human Behaviour and Allied Sciences, clown therapy is essentially the sum of "drama therapy and humour" and it should be welcomed as an additional method of treatment. Photograph: Ravi Choudhary/PTI Photo

According to Agarwal, their acts change depending on the audience.

"People's reaction is not always the same. It's more difficult to clown in hospitals and there are also times when children get scared. In old age homes, the clowning is different...

"When we're performing in old age homes we try to connect more with them, hug them. We take a little leverage with voices, singing songs and dancing, but in hospitals we mostly do mime," the 33-year old former sociology teacher said.

Agarwal quit her job in November 2018 to clown full time. The group takes money from private hospitals such as Apollo but not from government establishments.

The group has done gigs across the National Capital Region, including in Safdarjang hospital, Noida's Kailash hospital, for cancer survivors in Gurgaon's Medanta hospital as well as old age homes and orphanages. 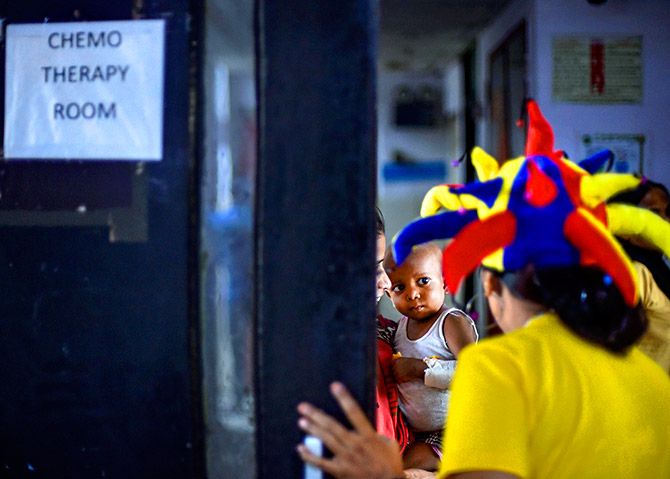 IMAGE: The group takes money from private hospitals such as Apollo but not from government establishments. Photograph: Ravi Choudhary/PTI Photo

Clownselors is not the only group.

A similar wish to spread smiles moved Harish Bhuvan to start 'Compassionate Clowns' in Bengaluru in 2013 when a close friend succumbed to cancer.

"After the first smile there was no looking back," he said.

"I realised there were some people in the world who were already doing it, but none in India so far. So we started it and kept doing it and it got momentum. And then I travelled all across India spreading this, now we have over 2,000 volunteers with us," Bhuvan, a former research assistant at IIT Bombay, said.

Spreading smiles among those in pain can sure be rewarding, but Bhuvan believes it is the confusion of who is getting healed that is the most rewarding aspect of clowning.

"When a clown goes inside a hospital to cheer patients up, it's the clown who also gets healed."

The question hangs in the air. But no one really wants an answer.

Manish Sain
© Copyright 2021 PTI. All rights reserved. Republication or redistribution of PTI content, including by framing or similar means, is expressly prohibited without the prior written consent.