News
Business
Movies
Sports
Cricket
Get Ahead
Money Tips
Shopping
Sign in  |  Create a Rediffmail account
Rediff.com  » News » Terror on the tracks: A deadly history of attacks on trains

On July 11, 2006, several bomb blasts ripped through Mumbai's local trains in a synchronised attack in the evening peak hours. Altogether 188 people were killed and 816 were injured.

Terror attacks on moving trains are not uncommon. The large number of people in an enclosed place can make terrorist attacks particularly catastrophic. Such devastation always coincides with the radicals’ interests.

One, because such attacks cause maximum damage and panic and two, because preventing such attacks is extremely difficult for security forces.

Here are some of the worst terror attacks in recent history with trains and passengers as intended targets. 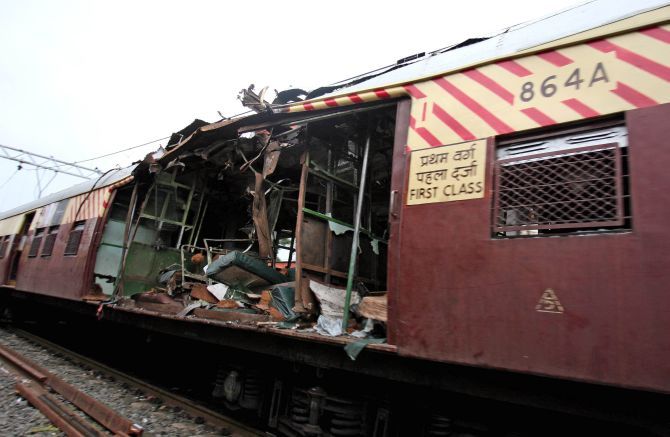 A damaged train compartment hit by explosives in Mumbai on July 12, 2006. Photograph: Reuters

The 11 July 2006 Mumbai train bombings were a series of seven bomb blasts that took place over a period of 11 minutes on the Suburban Railway in Mumbai, the capital of the Indian state of Maharashtra and the nation's financial capital.

The bombs were set off in pressure cookers on trains plying the Western line of the Suburban Railway network. 188 people were killed and over 700 were injured. 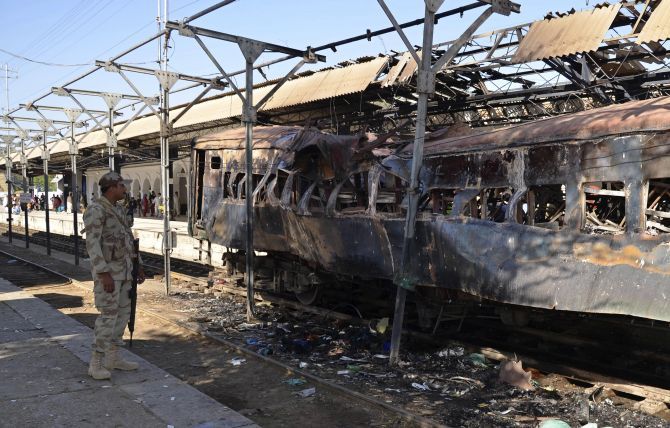 A paramilitary soldier stands near a damaged passenger carriage at the site of a bomb blast in the town of Sibi. Fourteen passengers were killed and about 50 wounded when militants bombed the train in Pakistan's Baluchistan province. Photograph: Amir Hussain/ Reuters

The bomb hit the Jaffar Express train in Baluchistan killing at least six people and wounding more than 17 others.

The device, apparently planted on the railway track, exploded when the train approached a station in Naseerabad district, around 250 kilometres (150 miles) southeast of Quetta, the capital of insurgency-hit Baluchistan province. 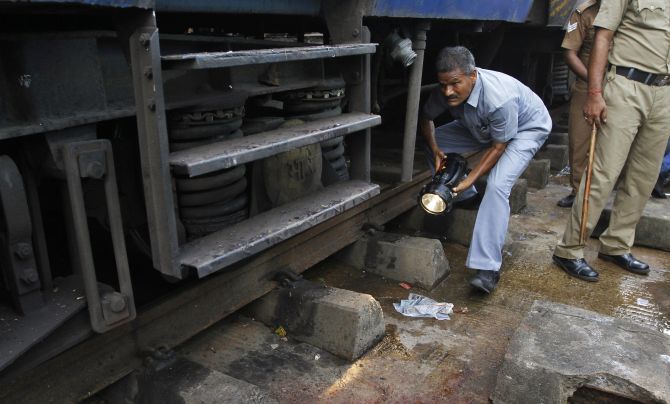 A member of the bomb disposal squad examines the area next to a passenger train in which two explosions occurred, at the railway station in the southern Indian city of Chennai. Photograph: Babu/ Reuters

2014 Chennai train bombing is the explosion of two low-intensity bombs on the early hours of 1 May 2014 in a Guwahati bound train from Bangalore arriving at the Chennai Central railway station, killing 1 woman passenger and injuring at least 14 others. 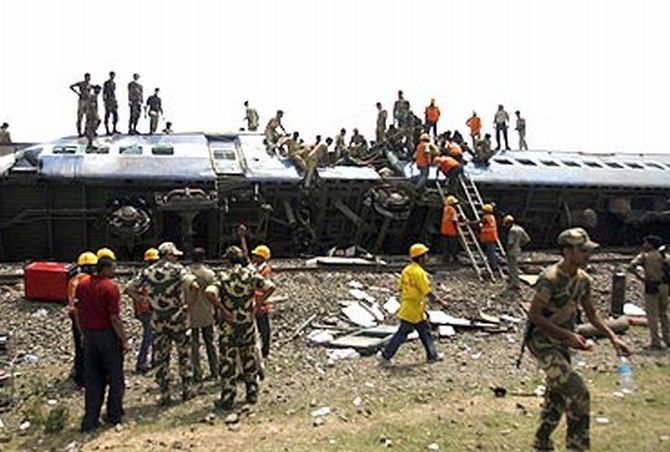 The site of the Jnaneswari Express derailment which claimed the life of 141 passengers.

The Jnaneswari Express derailment occurred on 28 May 2010 in the West Midnapore district of West Bengal, India.

It was claimed that Naxal militants bombed the railway track, which in turn led to a train's derailment before an oncoming goods train hit the loose carriages resulting in the deaths of at least 141 passengers. 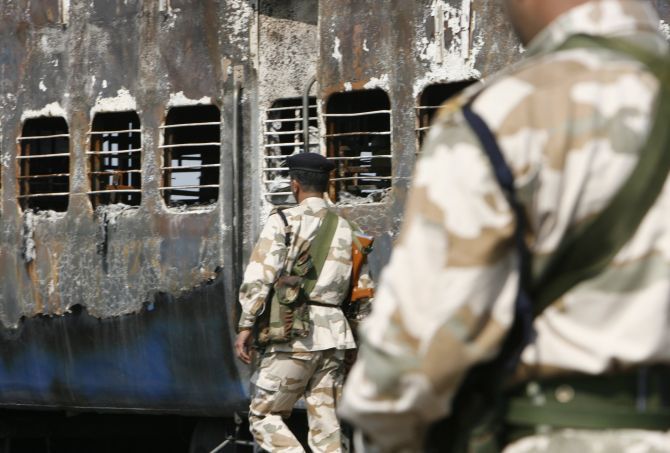 Rapid Action Force personnel stand guard besides a burnt carriage of a Samjhauta Express train in Deewana, near Panipat town. Two bombs exploded aboard a train bound from India to Pakistan, sparking a fire that killed at least 66 passengers on Monday in what the Indian government called an "act of terrorism". Photograph: Desmond Boylan/ Reuters

The 2007 Samjhauta Express bombings were terrorist attacks that occurred around midnight on 18 February 2007 on the Samjhauta Express, a twice-weekly train service connecting Delhi, India, and Lahore, Pakistan.

Bombs were set off in two carriages, both filled with passengers, just after the train passed Diwana station near the Indian city of Panipat, 80 kilometres (50 mi) north of New Delhi. Sixty-eight people were killed in the ensuing fire and dozens more were injured. Of the 68 fatalities, most were Pakistani civilians. 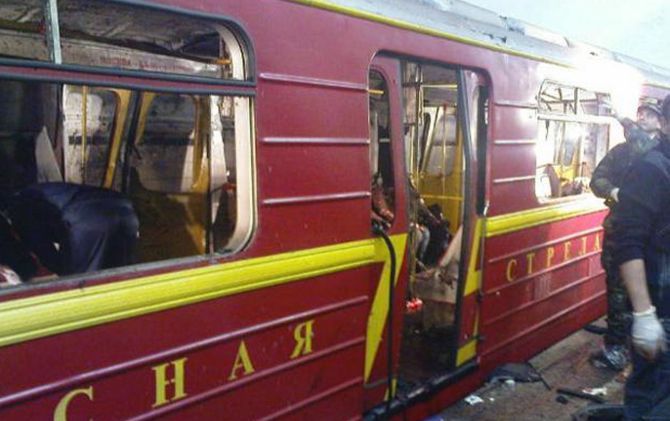 The 2010 Moscow Metro bombings were suicide bombings carried out by two women during the morning rush hour of March 29, 2010, at two stations of the Moscow Metro (Lubyanka and Park Kultury), with roughly 40 minutes interval between. At least 40 people were killed, and over 100 injured. 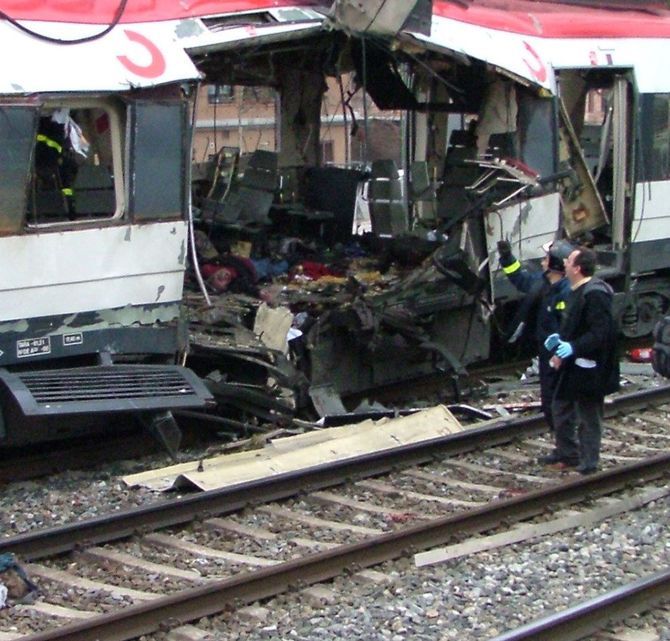 The 2004 Madrid train bombings (also known in Spain as 11-M) were nearly simultaneous, coordinated bombings against the Cercanías commuter train system of Madrid, Spain, on the morning of 11 March 2004 -- three days before Spain's general elections and two and a half years after the September 11 attacks in the United States. 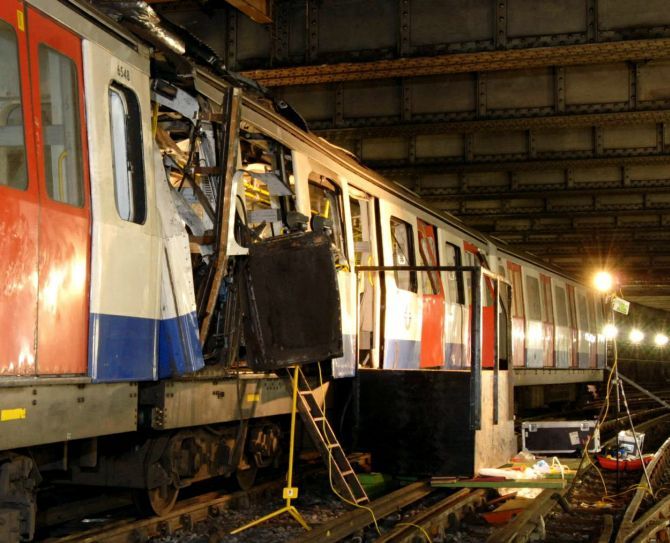 A Metropolitan Police handout photograph shows the London Underground train which was involved in an explosion at Aldgate Underground station. Police said on Saturday three of the blasts were almost simultaneous. Photograph: Reuters

On the morning of Thursday, 7 July 2005, four Islamist extremists separately detonated three bombs in quick succession aboard London Underground trains across the city and, later, a fourth on a double-decker bus in Tavistock Square.

Fifty-two civilians were killed and over 700 more were injured in the attacks, the United Kingdom's worst terrorist incident since the 1988 Lockerbie bombing as well as the country's first ever suicide attack.

Also read: The only 7/11 blast accused who escaped conviction