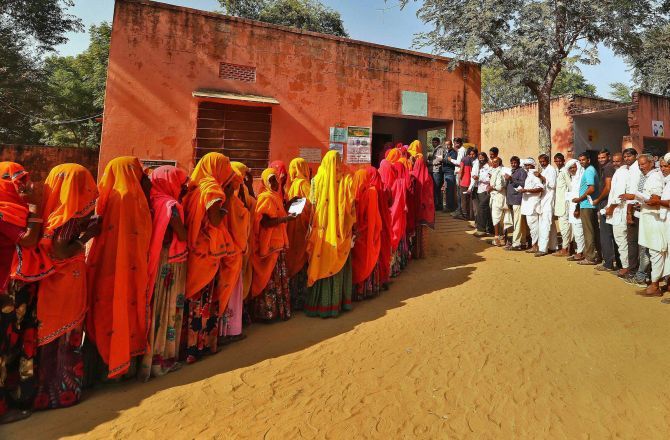 IMAGE: Voters stand in queues outside the polling station to cast votes for the state assembly elections, at Samred village, Ramgarh Tehsil in Jaipur, on Friday. Photograph: PTI Photo

Rajasthan recorded a turnout of 74 per cent in polling on Friday, sealing the fate of Chief Minister Vasundhara Raje whose Bharatiya Janata Party is hoping to return to power after a tough challenge from the Congress.

In Telangana, an estimated 67 per cent of over 2.80 crore voters cast their ballots on Friday in an election that will test the popularity of the ruling Telangana Rashtra Samiti supremo K Chandrasekhar Rao and the wisdom of the great gamble he made in going for early elections.

Barring stray incidents of clashes and malfunctioning of voting machines at a few places, the polling was largely peaceful, including in areas affected by Maoist insurgency.

"As of 5 pm, we have reports that the polling was at 67 per cent. Webcasting shows that some people are still in queues. So, we expect the polling to go up by another two per cent," the state's chief electoral officer Rajat Kumar told reporters.

The Election Commission said 74.02 per cent of voters exercised their franchise, a tally just short of the 75.23 per cent registered in the previous assembly election. 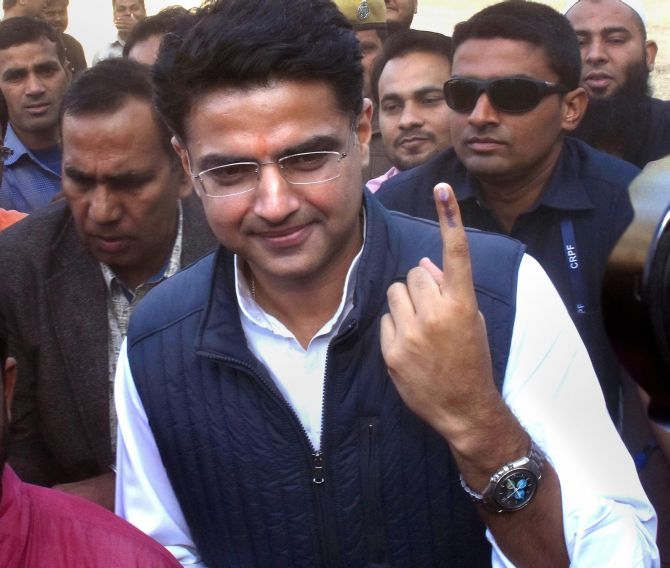 The police reported a few clashes among supporters but said polling across the 51,687 booths was largely peaceful.

There were clashes and arson outside the booths in Bikaner and Sikar but polling remained unaffected, he added.

At places in the border districts of Barmer and Jaisalmer, people walked miles through the desert to cast their votes.

In Bundi district's Hindoli area, 102-year-old Kisni Bai was among the voters. Also in Bundi, Dhapu Bai, said to be over 100 years old, was brought to the polling station on a cot by her family members. 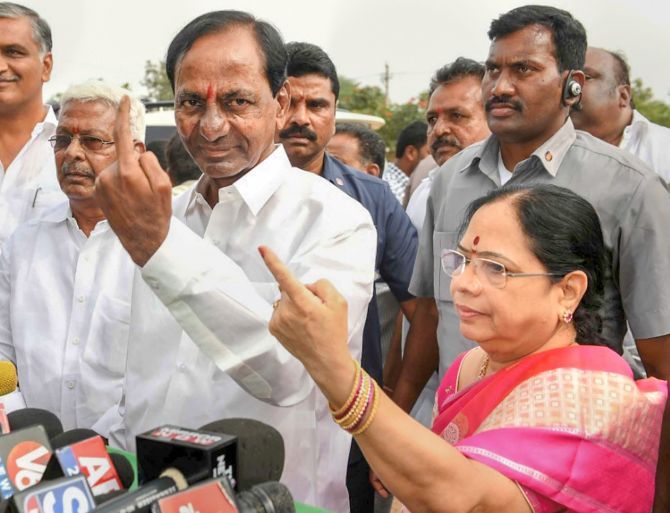 First-timers recorded the significant milestone in their lives with selfies, displaying an inked finger, to be posted on social media.

"Have chosen my future, you too show up," one man posted.

Jaisalmer's Pokaran recorded the highest turnout of 87.03 per cent.

The lowest, 59.97 per cent, was in Pali's Sumerpur, where Prime Minister Narendra Modi held a public rally on the last day of the no-holds-barred electioneering seen in the state.

The BJP is trying to retain power in the state it won in 2013, displacing Ashok Gehlot's Congress government.

If Congress returns, as exit polls predicted Friday evening, Gehlot is tipped as a possible candidate for the post -- along with the state party chief Sachin Pilot.

Vasundhara Raje contested from her Jhalrapatan constituency, Pilot from Tonk and Gehlot from Sardarpura. Results will be declared on December 11, along with those from four other states that went to the polls during the past weeks.

There are 2,274 candidates in the fray for 199 constituencies out of the total 200 in Rajasthan.

Raje, the BJP's chief ministerial candidate, contested against veteran BJP leader Jaswant Singh's son Manvendra Singh in a constituency she has represented since 2003.

Manvendra Singh had switched to the Congress just before the election. In Tonk, Pilot contested against Rajasthan Transport Minister Yoonus Khan, the BJP's only Muslim face in the elections.

In the current House, the BJP has 160 seats and the Congress 25.

Polling began at 8 am, picking pace over the first few hours.

Kumar said there was a delay in start of polling at some booths on accounts of malfunctioning of EVMs and voter verifiable paper audit trail (VVPAT) machines. 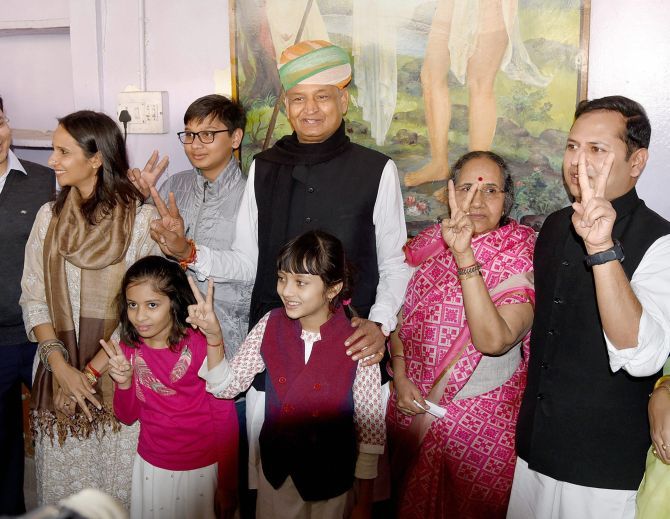 He said officials had to replace 754 Ballot units, 628 control units and 1,444 VVPAT machines which were used for the first time in Telangana.

The CEO said Income Tax and state government officials have seized unaccounted cash and other goods worth Rs 138 crore since the Model Code of Conduct came into force in September last week.

Vote was taken for all the 119 seats of Telangana assembly for the first time after the division of Andhra Pradesh and creation of India's youngest state in 2014. Uttam Kumar Reddy alleged that his party candidate in Kalwakurthy Assembly segment Vamsichand Reddy was attacked by BJP cadre in Amangal where he had gone to observe the poll pattern.

TRS supremo and caretaker Chief Minister K Chandrasekhar Rao, widely credited for the creation of Telangana, exuded confidence that his party would come back to power with a 'huge majority'.

Uttam Kumar Reddy hoped that Congress-led 'Praja Kutami' would win and get over 80 seats in the 119-member House.

Reddy, who spoke before the polling concluded, said the number could go up if the voting percentage was higher.

Adding a dash of glamour to the poll process, celebrities turned up in good numbers to cast their votes. At some places, people were seen taking selfies with celebrity voters.

However, disappointment was in store for shuttler Jwala Gutta, who said she could not vote as her name was missing from the voters list.

Reacting to her complaint, Rajat Kumar said he has sought a report form the district Electoral officer concerned.

"I sincerely apologise to people who could not vote as their names were missing. We will certainly rectify mistakes in the voters list," he said.

Additional DG (Law and order) Jitender said about one lakh security personnel, including 20,000 drawn from other states and 25,000 central paramilitary forces, were deployed to ensure peaceful polls.

The Congress has stitched together 'Praja Kutami' (People's Front) with the Telugu Desam Party, Telangana Jana Samiti and the Communist Party of India in a bid to wrest power from the TRS, which is seeking a second term in office.

The TRS has gone it alone in the polls and so has the BJP.

As many as 1,821 candidates including a transgender are in the electoral fray.

Voting began at 7 am and concluded at 5 pm, except in 13 constituencies classified as Left Wing Extremist-affected where the process ended at 4 PM itself.

Counting of votes would be taken up on December 11.