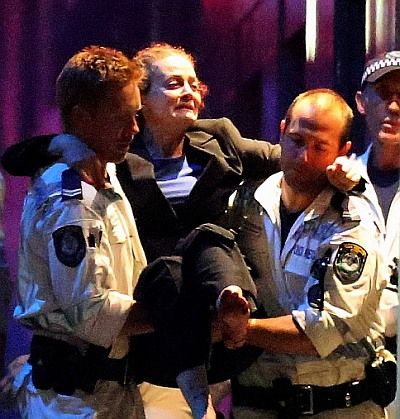 A 17-hour-long hostage drama in which a lone heavily-armed man of Iranian-origin held 17 people hostage at a cafe in central Sydney ended late Monday night (Indian Standard Time) with the police storming it, resulting in three deaths.

Two Indians who were among the captives escaped safely.

Police fired stun grenades and shots as they stormed the Lindt Chocolate Cafe in Sydney's commercial district after 2:30 am local time Tuesday (9 pm IST Monday) and later declared that the siege was over.

The 50-year-old gunman Man Haron Monis and two hostages were killed and four other people were injured, Commissioner Andrew P Scipione of the New South Wales police said at a joint news conference with the state Premier Mike Baird at 5.45 am local time. 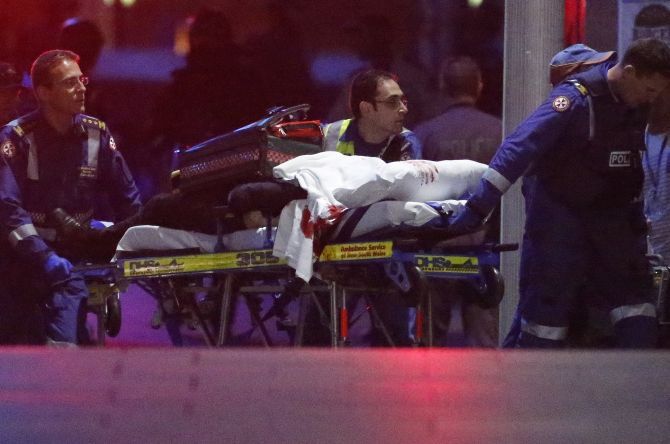 Paramedics remove a person, with bloodstains on the blankets covering the person, on a stretcher from the Lindt cafe, where hostages were being held, at Martin Place in central Sydney. Photograph: David Gray/Reuters

The gunman was shot and pronounced dead after being taken to hospital, NSW police said in a statement.

Two hostages -- a 34-year-old man and a 38-year-old woman -- were also pronounced dead after being taken to hospital, it said.

A police officer was among the four injured, police said.

The gunman, a self-styled Muslim cleric, was described by his former lawyer as an isolated figure, who was acting alone. 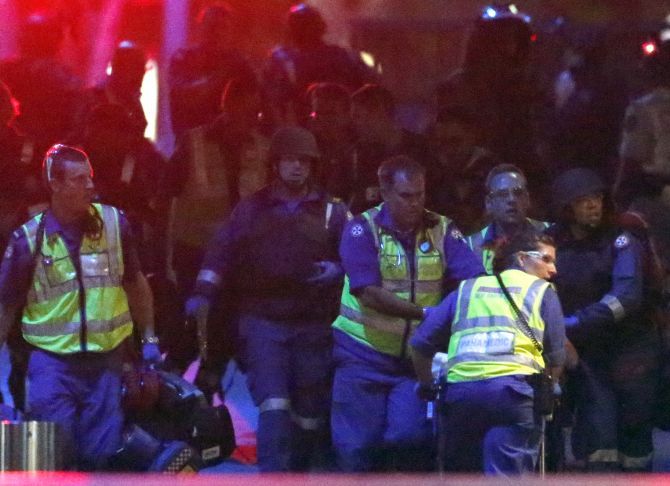 Reddy has been working in Australia for the past seven years and is a native of Guntur in Andhra Pradesh.

Monis, who arrived in Australia as a refugee in 1996, notoriously sent letters to the families of Australian soldiers who lost their lives in Afghanistan, accusing them of being murderers.

In November last year, he was charged with being an accessory before and after the murder of his ex-wife, who was allegedly stabbed and set alight in her apartment complex.

In March, he was charged with sexually and indecently assaulting a young woman in 2002. 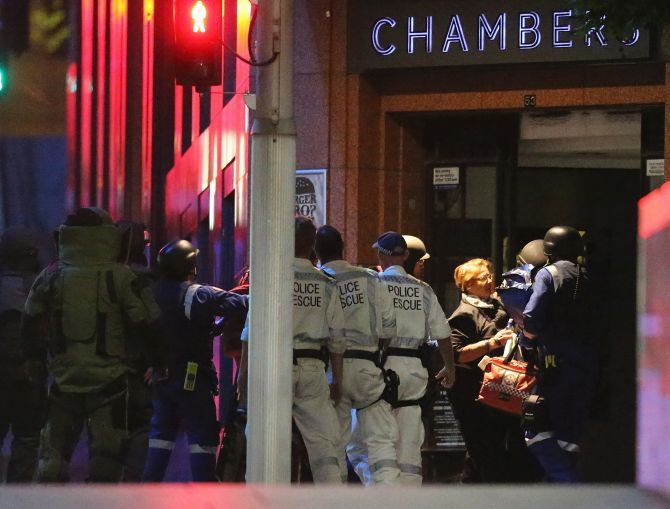 Five to six hostages, including the Indian techie, were seen running out of the eatery before the police raided the cafe. Earlier in the day, just over five hours into the siege, five people, including a woman, had escaped from the cafe.

"It was the act of an individual. This should never destroy or change the way of our life," Scipione said.

The gunman, a "self­-styled sheikh", was described by his former lawyer as an isolated figure.

A "critical incident investigation" into the operation that ended the siege has been launched, police said. 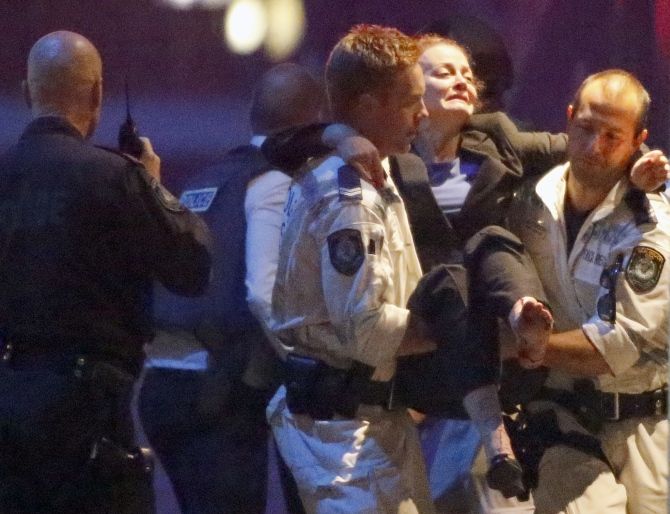 Police rescue personnel carry an injured woman from the Lindt cafe, where hostages were being held, at Martin Place in central Sydney. Photograph: Jason Reed/Reuters

"About 2:10 am (Tuesday), a confrontation occurred between police and a man who had taken a number of people hostage inside a cafe on Martin Place," the police statement said.

"Shots were fired during the confrontation. As a result, the 50-year-old man was pronounced dead after being taken to hospital," it said.

A male police officer suffered a non-life threatening wound to his face from gunshot pellets and was in hospital.

A 35-year-old woman was also taken to hospital as a precaution, the statement said. 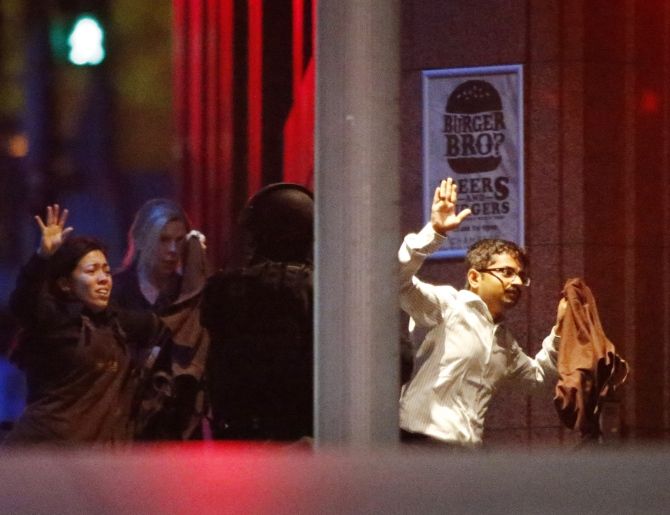 Hostages run past a police officer near the cafe in Martin Place in central Sydney. Photograph: Jason Reed/Reuters

Police confirmed no explosives were found at the cafe.

Police raided the cafe after they heard a number of gunshots from inside, Scipione said.

"They made the call because they believed that at that time, if they didn't enter, there would have been many more lives lost," he said.

"Until we were involved in this emergency action, we believe that no one had been injured. That changed. We changed our tactic," Scipione said, adding that all 17 hostages had been accounted for.

"Sydney siege is over," New South Wales police tweeted minutes after loud bangs and gunshots were heard as police stormed the cafe in Martin Place, close to the Indian Consulate which was closed as result of the siege. 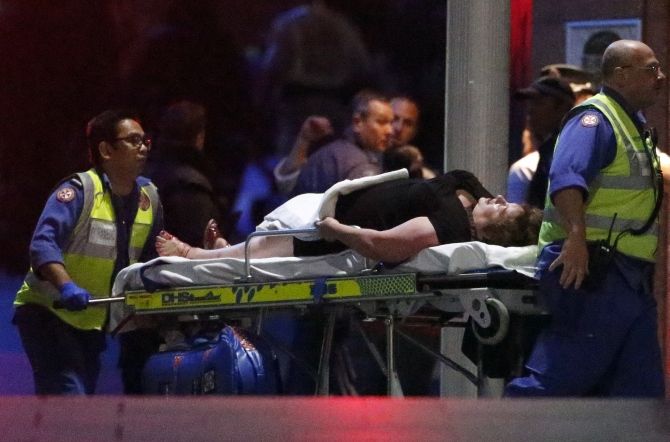 Paramedics remove an injured woman on a stretcher from the Lindt cafe, where hostages were being held, at Martin Place in central Sydney. Photograph: David Gray/Reuters

The siege began after 9 am local time as Monis, who was granted political asylum in Australia, took the people captive.

The gunman was reportedly armed with a shotgun and made a series of demands through Australian media like the delivery of an Islamic State flag and a conversation with Australian Prime Minister Tony Abbott.

During the siege, television footage showed people inside the cafe with their hands pressed against the window holding the black flag with Arabic script known as Shahadah, a prayer spoken in mosques daily. The flag displayed was not one specific to the Islamic State terror group, reports said.

"There is no God but Allah; Mohammed is his messenger" was written on the black flag.