Raksha Bandhan celebrations remained subdued this year as the rampaging coronavirus pandemic cast a shadow over the festivities, that celebrate the brother-sister bond, with people mostly preferring to stay at home. 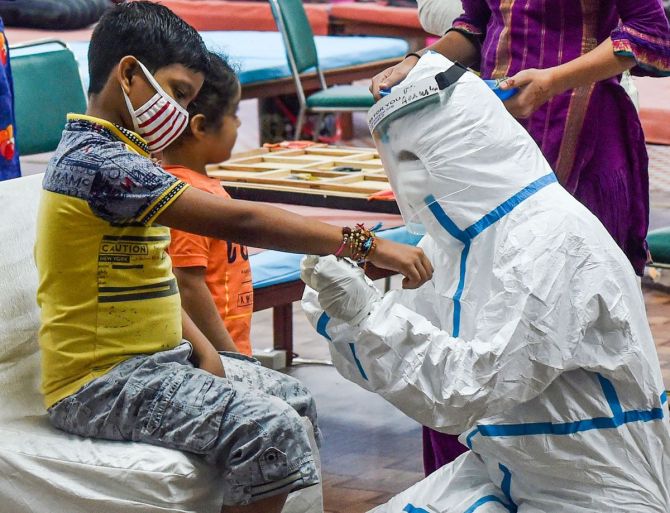 IMAGE: A nurse ties rakhi on the wrist of a patient on the occasion of Raksha Bandhan, at CWG Village COVID-19 care centre near Akshardham, in New Delhi. Photograph: Manvender Vashist/PTI Photo

People relied on homemade sweets and some rituals moved online, with siblings ordering rakhis and e-gifts for each other and meeting through video calls.

"This is the first time that it has happened, but this is the need of the hour," said Rahul Bhardwaj, a resident of the national capital, who could not meet his sister who lives in a different city.

"We need to keep ourselves safe and our loved ones safe too." 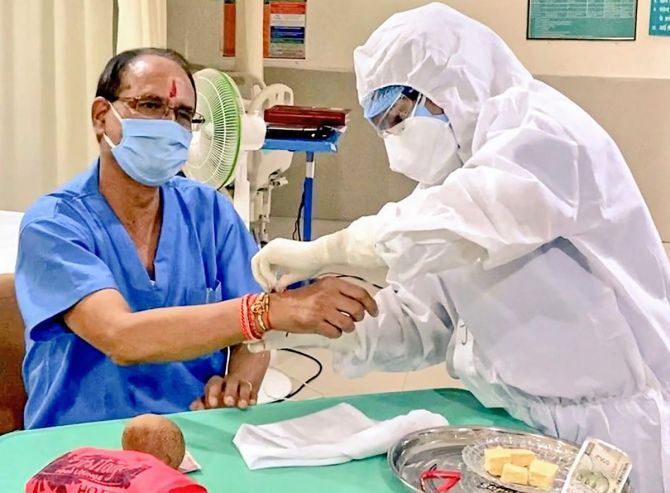 IMAGE: On the occasion of Raksha Bandhan, a Corona warrior nurse and wife of Madhya Pradesh Cabinet Minister tied rakhi to Chief Minister Shivraj Singh Chouhan at a hospital in Bhopal. Saroj, a nurse deployed at the ward in which Chouhan has been admitted, tied a rakhi to the Chief Minister. Taking to Twitter, the Chief Minister said, "On the auspicious occasion of Raksha Bandhan, Sister Saroj, a Corona warrior posted in my ward in the hospital, tied a rakhi with great affection. I wish her a happy and happy life." Photograph: PTI Photo

"The festival was a bit different this year. I got homemade barfi for my brothers and did not buy anything from outside. We are also not going anywhere and just spending time with our family," said Shivani Rawat of Delhi.

The President celebrated the festival with members of the nursing community at Rashtrapati Bhavan, describing them as saviours who are risking their own lives in the line of duty to save others. 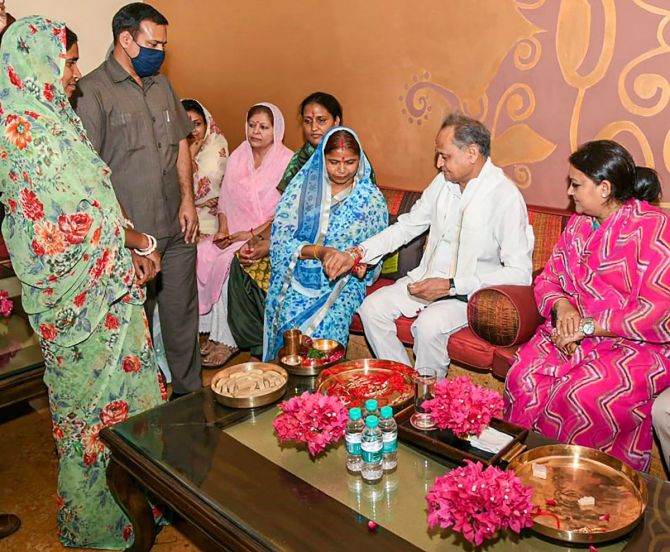 IMAGE: Women Congress MLAs of Rajasthan celebrated the festival of Raksha Bandhan by tying Rakhis on the wrist of Chief Minister Ashok Gehlot. Minister Mamta Bhupesh and legislators Shakuntala Rawat, Ganga Devi and others tied Rakhi on the wrist of the chief minister and offered him sweets. The festival was celebrated in Hotel Suryagarh in Jaisalmer where the MLAs have been made to stay to save them from the alleged bids to make them ditch the Gehlot government. Photograph: PTI Photo

Legendry singer Lata Mangeshkar shared a special audio message with the PM on the occasion, wishing him well. In his response, the PM said her message "filled me with immense inspiration and energy".

Union Home Minister Amit Shah, who is in a hospital after testing positive for the coronavirus, tweeted, "Heartfelt greetings to the people of the country on the auspicious occasion of Raksha Bandhan." Congress leader Rahul Gandhi also wished everyone. His sister and the party's general secretary Priyanka Gandhi Vadra said she is proud to have a brother like Rahul Gandhi.

"My best wishes to all the countrymen on Raksha Bandhan," she tweeted.

But as people remained at home, with the fears of contracting the virus running deeper than ever, industry sources estimated severe losses to shopkeepers.

"Sweets worth around Rs 10,000 crore were sold across the country on Raksha Bandhan last year. This figure is expected to come down to around Rs 5,000 crore this time," the director of the Federation of Sweets and Namkeen Manufacturers, Feroz H Naqvi, said on Sunday. 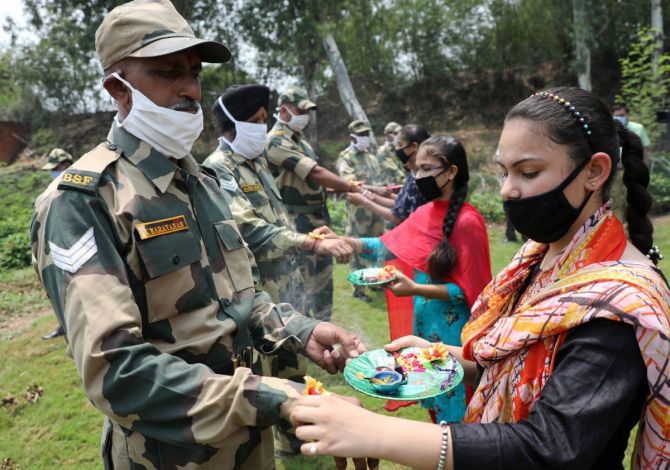 Samir Saha, a roadside vendor in In West Bengal's Shyambazar, said, "Last year, I had earned Rs 5,000 selling rakhis. This time, I managed to earn just Rs 1,000. The pandemic has hit us hard."

Some people, however, celebrated the festival in symbolically unique ways.

Animal lovers tied 'rakhis' to two elephants in Jalpaiguri district and vowed to protect them 'as many of them are dying in man-animal conflict'.

In Odisha, acclaimed sand artiste Sudarsan Pattnaik created a mural on Puri beach as a tribute to COVID-19 warriors. "Let's celebrate this #RakshaBandhan with #CovidWarriors, those are working tirelessly day and night for us," he said in a Twitter post.

IMAGE: President Ram Nath Kovind celebrates Raksha Bandhan with nurses of The Trained Nurses’ Association of India, Military Nursing Service and President’s Estate Clinic. The president felicitated the nurses, saying they have been performing the role of front-line COVID warriors and their commitment to duty earns respect. Photograph: PTI Photo

Madhya Pradesh Chief Minister Shivraj Singh Chouhan, who is undergoing treatment for COVID-19 at a Bhopal hospital, shared on Twitter a picture of a rakhi tied on his wrist by nurse Saroj who is attending to him in the isolation ward.

Tribal residents in Mumbai's forested Aarey Colony, a prominent green lung of Mumbai and the site of a metro car shed, vowed to protect trees by tying them 'rakhis' on the occasion. 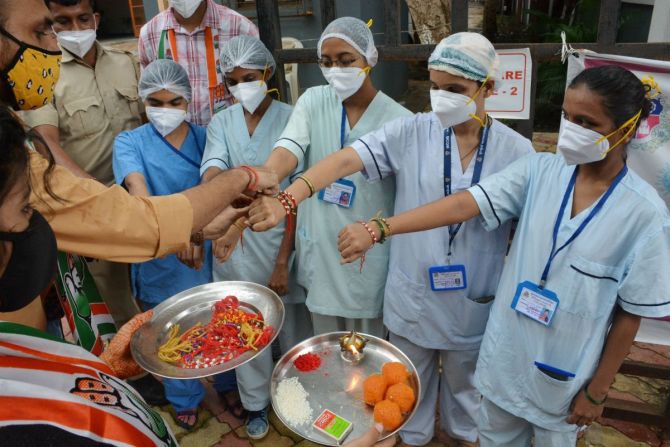 IMAGE: Congress activists tie rakhis on the wrists of BMC medical staff to applaud them for their impeccable services in the fight against COVID-19 in Mumbai. Photograph: PTI Photo
© Copyright 2021 PTI. All rights reserved. Republication or redistribution of PTI content, including by framing or similar means, is expressly prohibited without the prior written consent.