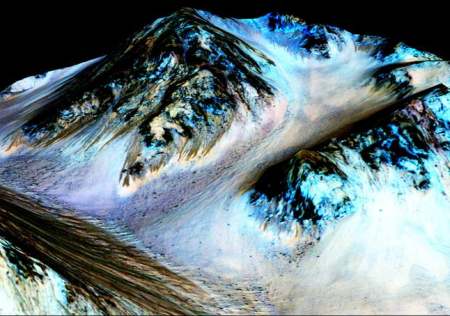 Scientists have found the first evidence that briny water may flow on the surface of Mars during the planet's summer months. 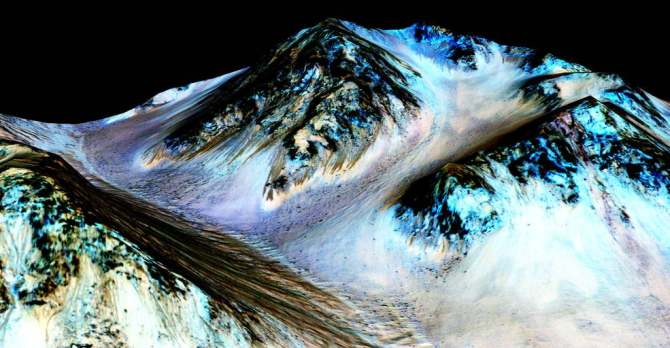 Dark, narrow, 100 meter-long streaks on Mars inferred to have been formed by contemporary flowing water are seen in an image produced by NASA, the Jet Propulsion Laboratory and the University of Arizona. Photograph: Reuters

According to a report published on Monday, Mars appears to have flowing rivulets of water. A team from the United States and France said it found evidence in the lines of "hydrated" salt minerals, which require water for their creation.  The findings further boost the odds of life on the red planet. “Our quest on Mars has been to ‘follow the water,’ in our search for life in the universe, and now we have convincing science that validates what we’ve long suspected,” said John Grunsfeld, astronaut and associate administrator of NASA’s Science Mission Directorate in Washington. “This is a significant development, as it appears to confirm that water -- albeit briny -- is flowing today on the surface of Mars.”

“Mars is not the dry, arid planet that we thought of in the past,” said Jim Green, director of planetary science for NASA. 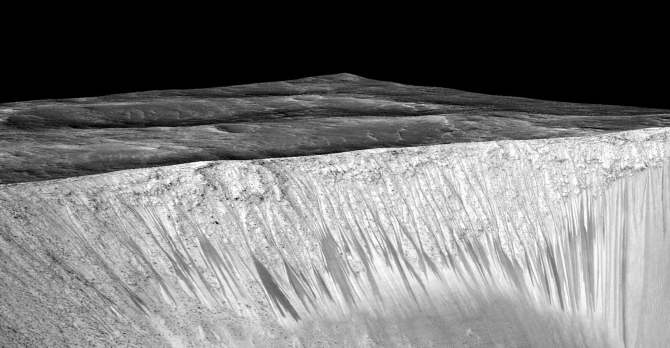 The streaks are roughly the length of a football field. Photograph: NASA

Scientists in 2008 confirmed the existence of frozen water on Mars. Now instruments aboard NASA’s Mars Reconnaissance Orbiter have yielded what researchers said is the strongest evidence yet that water in liquid form trickles down certain Martian slopes, reports AP.

MRO has been examining Mars since 2006 with its six science instruments. The discovery is the latest of many breakthroughs by NASA’s Mars missions.

“It took multiple spacecraft over several years to solve this mystery, and now we know there is liquid water on the surface of this cold, desert planet,” said Michael Meyer, lead scientist for NASA’s Mars Exploration Program at the agency’s headquarters in Washington. “It seems that the more we study Mars, the more we learn how life could be supported and where there are resources to support life in the future.”