World's most powerful rocket soars toward Mars, with a Tesla roadster as payload

The rocket is the first step in Musk's ambitious dream to send humans to Mars and establish a colony on the planet. 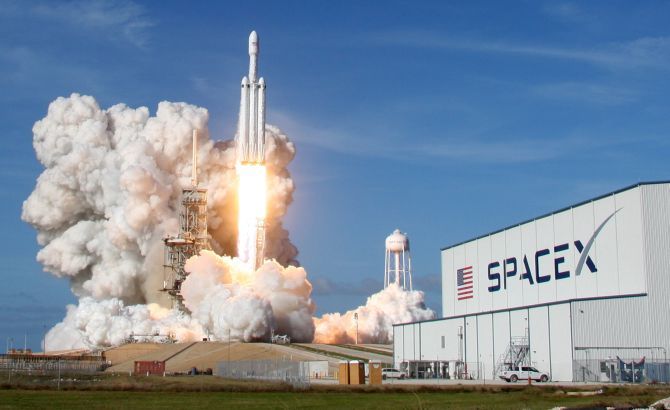 Business tycoon Elon Musk's SpaceX has created history by successfully launching the Falcon Heavy rocket, the most powerful operational rocket in the world, into outer space.

The rocket, which is on its course to the orbit of planet Mars, is the first step in Musk's ambitious dream to send humans to Mars and establish a colony on the planet.

The rocket made its successful launch at 3.45 pm Eastern time (2.15 am IST on Wednesday) from Kennedy Space Center in Florida, and SpaceX offered a live coverage of the whole process.

Test rockets typically carry a dummy payload, and Musk chose his cherry red Tesla Roadster along with a dummy driver inside for the ambitious mission.

As the rocket shot off to outer space, the tree Falcon 9 boosters attached to the engine attempted to land at three different sites back on Earth. IMAGE: Falcon Heavy can lift more than twice the payload of the next closest operational vehicle, the Delta IV Heavy, at one-third the cost. Photograph: Joe Skipper/Reuters

While the two side boosters successfully landed back, the landing of core booster that was supposed to land on SpaceX's drone ship in the Atlantic is yet to be ascertained as the smoke obscured the camera view.

Falcon Heavy can lift more than twice the payload of the next closest operational vehicle, the Delta IV Heavy, at one-third the cost -- about $90 million per launch compared to $350 million for its competitor.

The Falcon Heavy is essentially three smaller, Falcon 9 rockets strapped together, adding up to a total of 27 engines. 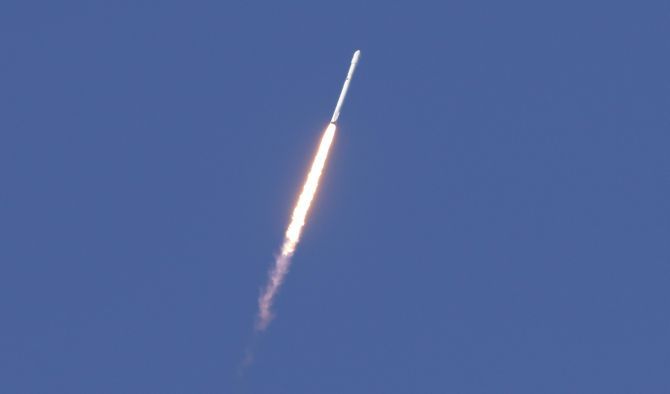 IMAGE: Experts said the successful launch would likely persuade NASA to consider using the rocket as a way to fast-track its next mission to the Moon. Photograph: Thom Baur/Reuters

It was initially designed to restore the possibility of sending humans to the Moon or Mars, but those plans have shifted and now the Falcon Heavy is being considered mainly as a potential equipment carrier to these deep space destinations, Musk had said on Monday.

Experts said the launch would likely catch the eye of National Aeronautics and Space Administration, which may consider using the rocket as a way to fast-track its mission to the Moon.

The Falcon Heavy was launched from the same NASA pad that was the base for the Apollo-era Moon missions of the 1960s and 1970s.

The SpaceX's live video also cut to a shot inside Musk's Tesla roadster that showed the words 'DON'T PANIC!' written on the dashboard. 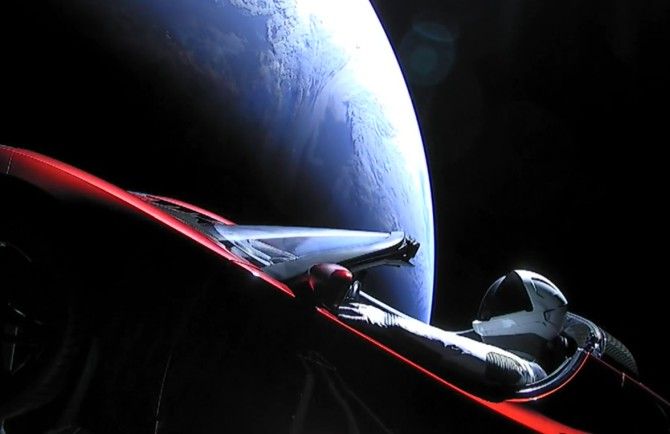 The webcast showed the car soaring into space, as David Bowie's Space Oddity played in the background.

Musk posted a video of the car on Twitter after launch, in which he can be heard laughing in the background as a camera behind the mannequin's head shows the car apparently in orbit around Earth.

He later posted another video showing a ‘live view of Starman’ appearing to cruise, its gloved hand on the wheel, through the darkness of space, the Earth's image reflected on its glossy red surface. IMAGE: Musk posted another video calling it 'live view of Starman', where the car appears to cruise through the darkness of space. Photograph: Courtesy SpaceX.com

The car was also outfitted with a high-data storage unit containing Isaac Asimov's science fiction book series, the Foundation Trilogy, and a plaque bearing the names of 6,000 SpaceX employees.

It is 'the most powerful operational rocket in the world by a factor of two', SpaceX said.

But the Falcon Heavy is not the most powerful rocket ever -- just the biggest in operation today.

The Saturn V rocket that propelled astronauts to the Moon could deliver more payload to orbit.