With people continuing to step out for 'non-essential' activities amidst the COVID-19 lockdown, police across the country have come up with unique ways to highlight the importance of staying at home. 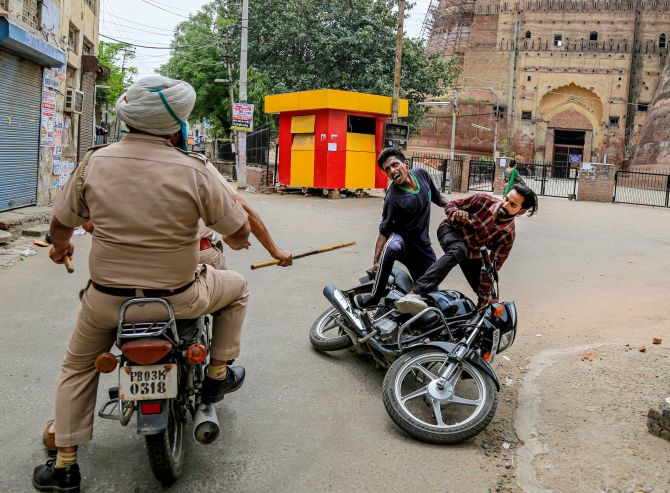 From making 'COVIDIOTS' (a term coined for those flouting restrictions) squat on the road and do sit-ups, to making them pose with pamphlets admitting their fault, police officials have pulled out all the stops from their kitty of creativity to drive home the message. 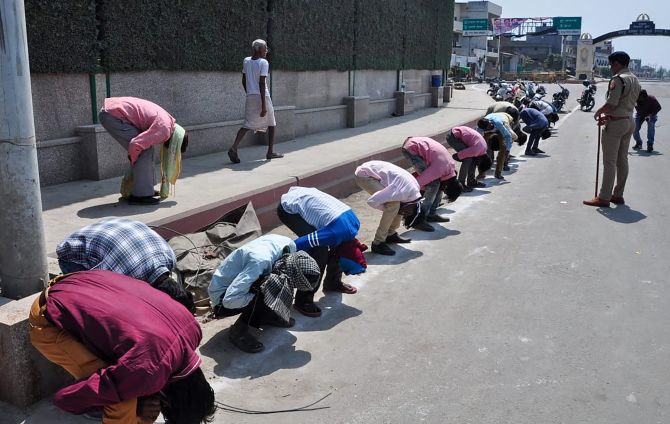 'Think before you step out during lockdown in #AndhraPradesh. Vijayawada police are finding new ways to restrict traffic. The chief minister @ysjagan has allowed only one per family to purchase essentials, gathering more than 5 is strictly prohibited. #AndhraFightsCorona,' writes a user on microblogging site Twitter. 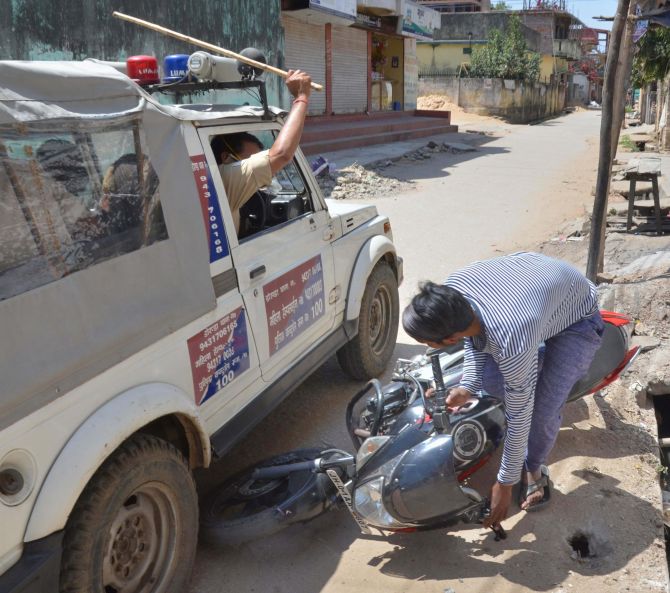 IMAGE: Police beat up a youth as he came out of his home in Ranchi on Wednesday. Photograph: PTI Photo

He accompanied the tweet with a 14 second-long video of the Andhra Pradesh police making defaulters do sit-ups with crossed hands. 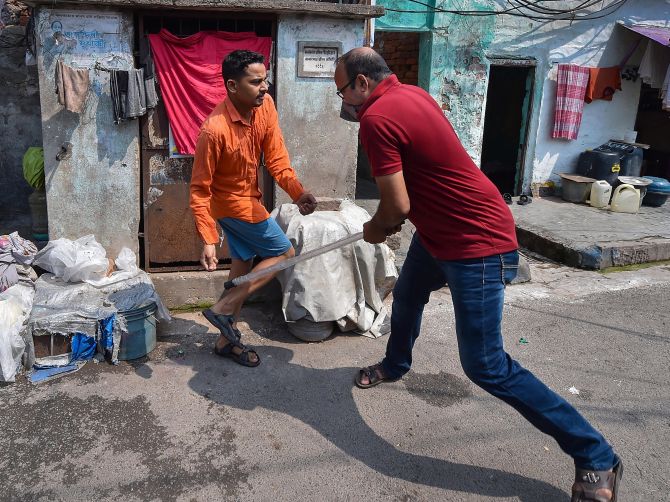 A similar awareness tactic was used by the Maharastra police, which in a video posted on social media, is seen making at least nine people do sit-ups near a traffic signal, evoking both laughter and appreciation for the officials. 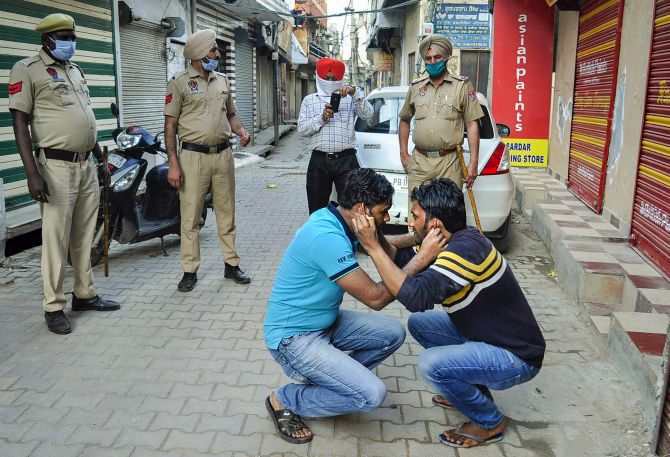 The central government had last week announced a lockdown till March 31 in 80 districts across India to contain the spread of the deadly coronavirus. 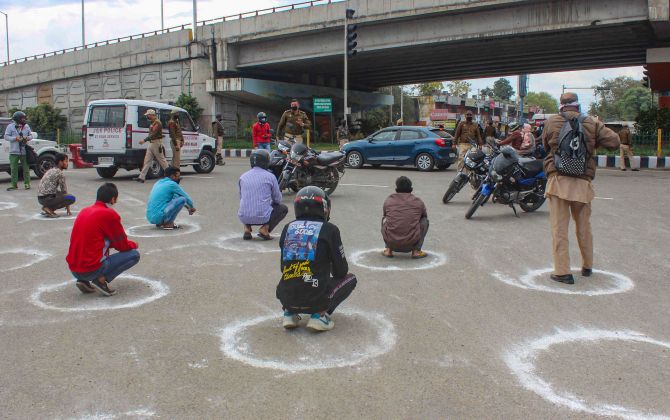 IMAGE: Policemen punish offenders, seated in marked circles to maintain social distancing, who violated the lockdown guidelines by venturing out of their homes unnecessarily during the 21-day complete lockdown, at Vikram Chowk in Jammu, on Wednesday. Photograph: PTI Photo

The virus has claimed nine lives and infected 562 people in the country.

The police forces in Punjab, Uttar Pradesh and Uttarakhand took their creative ways a notch higher to ensure that the public curfew is followed. 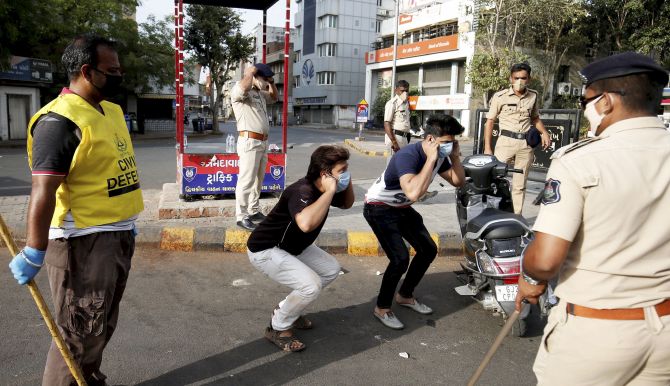 The accompanying video shows the police resorting to the age old 'murga' punishment to teach the defaulters a lesson. 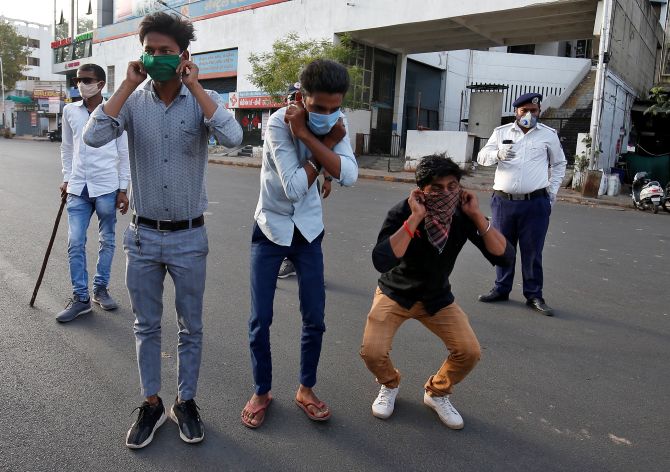 IMAGE: People made to do sit-ups as a punishment for breaking curfew in Ahmedabad. Photograph: Amit Dave/Reuters

Murga punishment is a stress position used as a corporal punishment where sit-ups are done holding the ears.

While defaulters in Punjab were asked to either crawl on all fours, or lie down flat on the road; those in Uttarakhand were made to pose with pamphlets that said, 'I'm enemy of society; I won't stay home'. 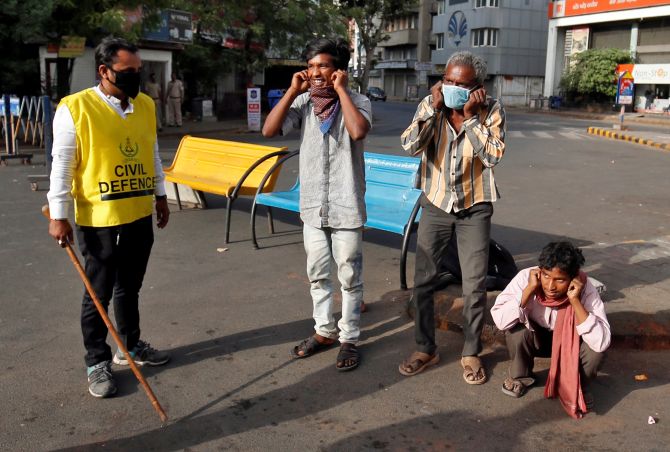 '#PunjabLockDown #PunjabPolice Nagin dance bhi karva do Bhai inse... why can't people getting in there brains at it is very serious matter... Please stay at home' (police makes people crawl from one place to another) #StayAtHomeSaveLives #StayHomeStaySafe #COVID2019 (sic),' one Twitter user posted along with pictures of people being punished in Punjab. 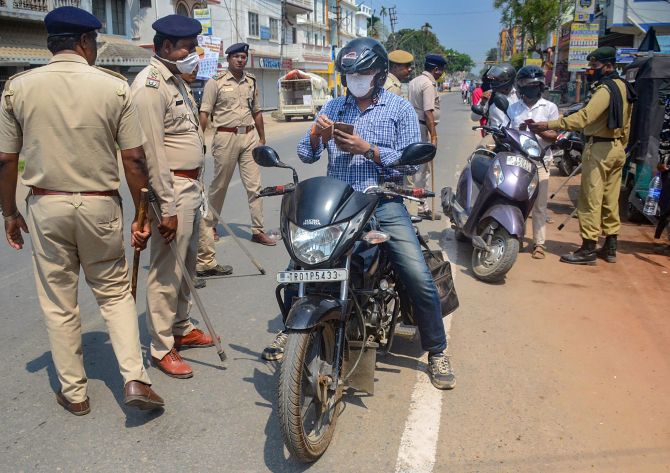 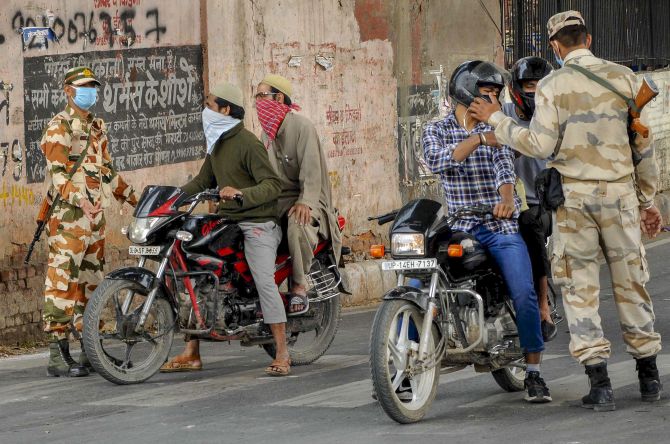 Sharing a video of a few police personnel driving people out of a public park peacefully while telling them the importance of staying indoors, he wrote, 'Delhi Police at its best! As Gr8 Ambassadors of #SocialDistancing ! #StaySafeStayHome.' 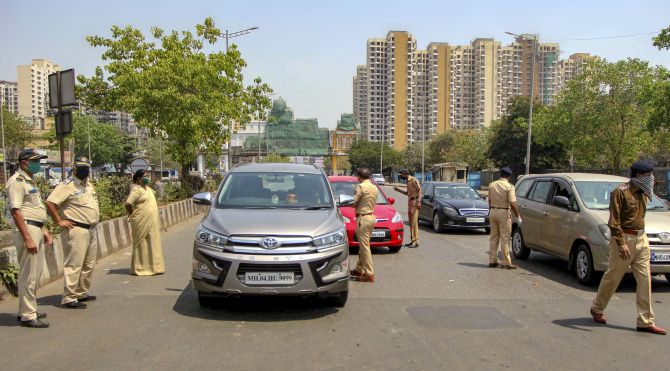 It was not all praise for the force as many netizens also shared instances of the police crossing the line.

In places like Guntur, Telangana, Sikar (Rajasthan), police is seen beating up those flouting the rules with lathis. 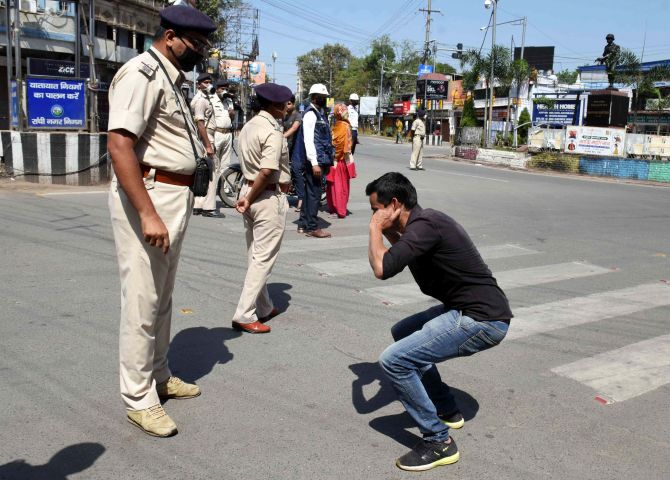 IMAGE: Police punishes an offender after he came out of his home in Ranchi. Photograph: PTI Photo

In several cases, people who were out for essential activities were harassed by the security personnel. Many Twitter users posted videos of such instances. 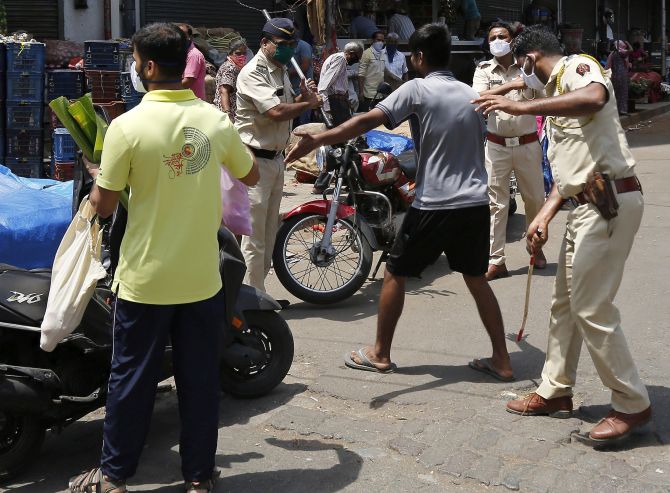 'A cab driver was basically trashed by police near Guntur bus stand. (you need to educate people and this kind of atrocity will create dissatisfaction and anger among people where you desperately need social cooperation) #AndhraPradesh #APLockDown #fightagainstcorona,' a user posted with an accompanying video. 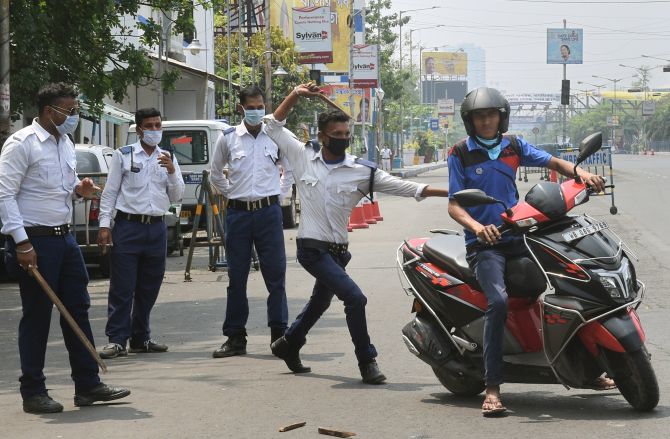 'This is really appalling! Doctors returning home from the hospital in Telangana are being stopped and harassed by police for breaking curfew. 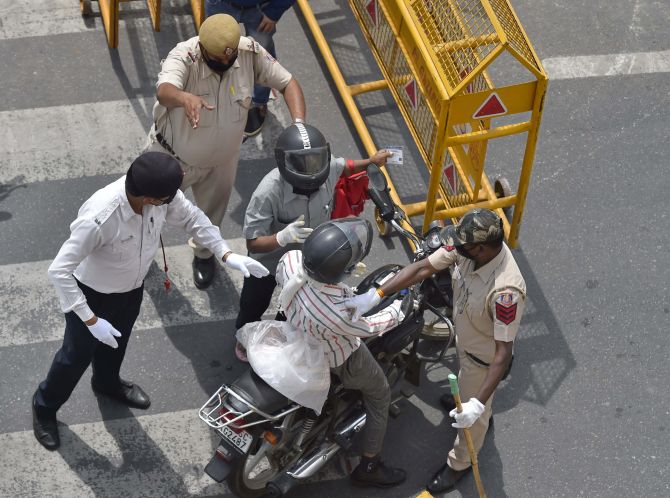 'This is even after they have showed the police their ID cards,' another user posted with a video showing an altercation between the police and a group of individuals.